‘The Lesbian South’ by Jaime Harker

‘The Lesbian South’ by Jaime Harker 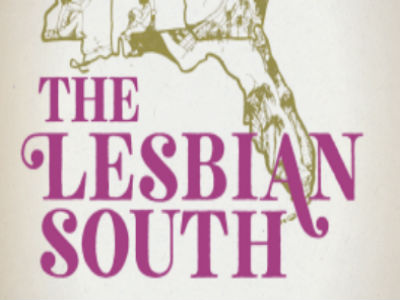 During her first semester as a professor at the University of Mississippi, Jaime Harker read John Howard’s Men Like That and learned to recognize the open secret of rural queer networks. “I have lived in John Howard’s Mississippi ever since,” writes Harker, “and it has been as charming and welcoming as the man himself.” Part memoir, part cultural and literary history, The Lesbian South examines the lesbian feminist print culture that thrived in southern networks from the seventies to the nineties. Yet unlike Howard’s hidden, tolerated queerness, these southern lesbian writers and editors made plenty of noise. Naiad Press, purveyor of popular lesbian novels, reached its height in its Tallahassee location; Durham, NC, boasted a thriving and multiracial lesbian literary scene; and out in the country, the lesbian landyke movement reimagined the South as a utopia where women could freely live and love each other. That these networks seem hidden to us now has much more to do with historical amnesia than secrecy, and The Lesbian South fills in significant gaps in the work started by Howard.Harker’s methodology for holding together a coherent version of southern lesbianism begins with accumulation and ends in a distillation of voices grouped topically, if sometimes paradoxically. Florence King’s raunchy conservatism shares the page with June Arnold’s liberationist experimentalism, and Rita Mae Brown’s best sellers share a shelf with the lesser-known poetry of Pat Parker. Harker’s revised topography of the South is shaped by the diverse expressions of lesbianism it inventories, and it reads like a well-curated archive, assembling meaning from fragments–lines from poems, excerpts of fiction, snippets of letters, gossip, and personal anecdotes–to create a usable past.

Harker frames the key debates of the women in print (WIP) movement around the Barbara Grier and June Arnold, two key figures in bringing lesbian voices into the reading public. Arnold’s press, Daughter’s Inc., strove to carve out a new lesbian literary strain from writers who invented language, imagery, and narrative structure apart from the dominant trends. From her end, Grier imagined Naiad Press as a salve to literary elitism, and usually emphasized accessible, even pulpy voices. While these may seem like two very different camps, Harker is quick to demonstrate how they ultimately worked in tandem: “Though I discuss Arnold and Grier as antagonists, they were coconspirators as well. Both believed that literature could change the world and that feminist literature would not only create new ways to understand gender but also liberate women from patriarchy.” This tendency to continually contrast while simultaneously comparing resists both a monolithic and divisive narrative of southern lesbianism, and instead paints the South as a “palimpsest, its radicalism willfully forgotten yet essential” to the lives of the people who reimagined its contours.

This paradoxical radicalism is most apparent in Harker’s chapter on depictions of queer sex in the WIP movement, where she invokes the grotesque as a precursor to a provocative sexual politics of visibility that informed many southern lesbian feminists’ writing. From Alice Walker’s and Bertha Harris’ liberatory female incest to the “uncomfortable directness” of Dorothy Allison’s and Cris South’s portrayals of rape, Harker makes clear that the southern lesbian canon by and large valued representation over respectability. Yet the very next chapter theorizes the South as a queer contact zone, a borderland where public queer spaces and communities can appear and disappear in the blink of an eye. That Harker moves between recalcitrant sexualities and accommodating publics without contradicting herself attests to the careful complexity of her archive.

Though The Lesbian South begins by looking at the South through Howard’s lens, it ends it by looking through the eyes of Harker’s wife, Dixie Grimes, Mississippi native and beloved chef at Dixie Belle’s Cafe. Written under the specter of HB 1523, Mississippi’s virulently homophobic and transphobic “Religious Freedom Bill,” this historical survey of southern lesbianism could easily have veered toward nostalgic yearning for better days long-gone. Yet Dixie, who has spent her entire life in the belly of the Deep South, maintains a relentless optimism that inspires her wife to claim southerness with the kind of true love that comes with embracing nuance. Through a plurality voices, Harker gives us the most usable of pasts.

Groundbreaking Cartoonist Howard Cruse, 75, has Died
'Everything Begins and Ends at the Kentucky Club' by Benjamin Alire Sáenz
'Wishbone: A Memoir in Fractures' by Julie Marie Wade