‘She Wants It’ by Jill Soloway

‘She Wants It’ by Jill Soloway 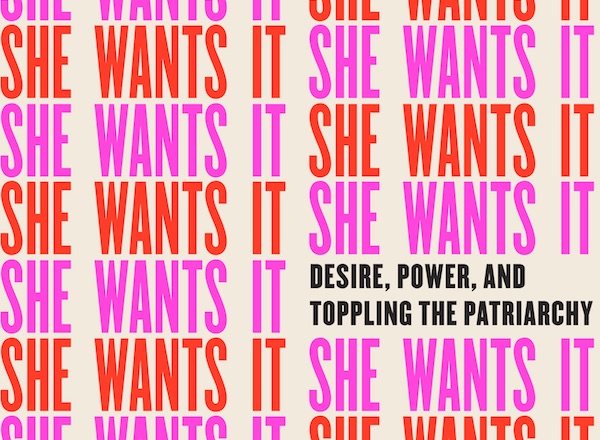 There are two main “shes” in Jill Soloway’s She Wants It – Jill before they came out as nonbinary and Carrie, Jill’s “Moppa,” after she came out as trans. You can’t equate one struggle with another, but it’s hard not to see similarities. Both were late bloomers seeking to live authentically, Soloway as (at that time) a cis-identified woman in Hollywood, Moppa as a trans woman in the world. Soloway was inspired by Carrie to create Transparent, the Amazon series that catapulted Soloway to worldwide fame, and to think deeper about their gender. And in that way, She Wants It is a book that challenges the traditional coming-out narrative. Coming out is not solely this shocking thing a family must deal with, but also an essential catalyst that helps someone live their life more truthfully:

Once my parent came out, I was suddenly powered by a huge gust of yes. I no longer believed what all of the men said about me, that I wasn’t ready. And I stopped believing what I had believed about myself – that I wasn’t a real artist.

Soloway admits they knew they would use Carrie’s experience for art. Judge if you must, but this is what artists do. In She Wants It, Soloway recounts Carrie’s story through the perspective of an artist having found a perfect muse. Readers might be curious about what Carrie’s life was like post-coming out, but that’s not the heart of this story. The heart is Soloway’s journey as an artist, something perfectly reflected in that Mary Tyler Moore-esque cover. Soloway watched The Mary Tyler Moore Show and grew up in that era, when women were told they could “make it after all.”

Soloway decides at a young age that they will be the first woman president. “It didn’t seem out of reach.” Life was supposed to be smooth sailing, but Soloway runs up against difficulty. In the book, they describe a project that fell apart, not because of the integrity of the project, but because of a poor table read. “I didn’t fight for anything,” Soloway remembers. “I didn’t know I could.”

When Soloway finally does get big success with Transparent, there is trouble. Soloway describes their experience on an Outfest panel and being accused of “transface” because a cis actor is playing the main role. Soloway’s explanation to the audience is that the character, Maura, might be genderqueer – which still doesn’t justify it, since actor Jeffrey Tambor is not genderqueer. Soloway explains to the reader that “the pilot probably wouldn’t have been made starring someone without Jeffrey’s stature.” Fair enough, but if every director felt like this, then trans folks would never get to be stars. Someone has to break the mold. Things get worse when Tambor is accused of sexual harassment by Van Barnes, his one-time assistant, and Trace Lysette, an actress, both trans women. And this all went down at the beginning of the Time’s Up movement, which Soloway was part of.

To their credit, Soloway discusses the Tambor mess, but, unfortunately, it is in a way that is extremely frustrating. They describe Tambor as a known bully, especially to women, even before accusations were made. So why did Soloway let this go unaddressed? Who was the boss here? No answer is provided, though one wonders if Soloway was frightened of Tambor too or scared to rock the boat. Soloway’s reaction to Lysette going public is “…I knew it would be over for Jeffrey. And that meant Maura. The show. Our TV family. My own family. My parent’s reputation. Everything.” Soloway wished they could throw some money at the situation; wondered whether what Van is saying is true; was upset Lysette did not come to the Transparent staff first, even though Lysette may have tried to handle it internally. When Soloway gets upset during a confrontation, Lysette is justifiably enraged. “I’m the victim here and YOU’RE crying?” The reader can feel their blood boil as well. Why didn’t Jill want to fight for Lysette and Barnes like they wanted to fight for other women? Just to save a TV show?

It’s easy to reduce Soloway to an enemy, to say they are cancelled, to not understand how they can’t see a connection between needing to “topple the patriarchy”and the importance of addressing the deep problems on their own set. But Soloway comes across as more of an imperfect human than mustache-twirling villain, more tone-deaf than anything else, with a blind spot as big as a small country. Would Soloway have felt different if it were not trans women accusing Tambor? Perhaps. It is hard to believe the person who made Transparent would be purposefully transphobic, though. Certainly, the way they acted was reprehensible, but you can also take a more charitable, more optimistic view and say they’ve got some learning still to do. You want to believe that what they are writing about are feelings from those moments, not how they would handle it today.

Soloway hurts themself in this book, though, by not addressing the thornier issues, and by not answering some pertinent questions. If you can get past the fact that Soloway is flawed, and the fact that the book contains some filler, you will enjoy this book. Soloway is funny, intelligent, and more appealing/less pretentious than you may think. This is the story of Soloway wanting it and Soloway getting it, and how getting it is not any kind of pot of gold at the end of a rainbow. Because once you’ve gotten what you want, you must know what to do with it. And if you don’t use power to uplift others, be prepared for the fallout.

'Out East: Memoir of a Montauk Summer' by John Glynn
'My Desire for History: Essays in Gay, Community, & Labor History' by Allan Bérubé
'The Advantages of Being Evergreen' by Oliver Baez Bendorf