‘Lost Soul, Be at Peace’ by Maggie Thrash

‘Lost Soul, Be at Peace’ by Maggie Thrash 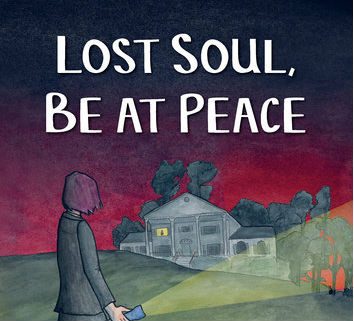 “The world is dangerous. Don’t let anyone in,” advises the U.S. Marshal who turns up unexplained on the front porch of teenaged Maggie Thrash’s home in her new graphic memoir Lost Soul, Be at Peace. It is only by paging through an article on the retaliatory massacre of a judge and his family in a discarded newspaper that Maggie learns the U.S. Marshal has come to protect her father, a federal judge, and the entire family, from a similar fate.

This opening scene captures the family dynamics that Maggie struggles with over the course of the story. A severe silence dominates her home, both in the form of her terse and fiercely private father and distracted, no-nonsense mother, as well as in the shape of the house itself, an echoey mansion into which, early in the story, her beloved cat disappears, never to be seen again. The large, isolated house is her parent’s bulwark against violence, economic instability, and chaos: the kind of environment which, Maggie gradually learns, characterized the childhood her father is constantly repressing.

For Maggie, though, as the title suggests, this “peace” leaves her lost. Ignored at home, and out of place as a artistic, progressive, and bravely out-of-the-closet queer woman among the right-wing Bible belt student body of her Atlanta prep school, she sinks unnoticed into depression. In a brilliant genre-blending move, the ghost of a boy Maggie’s age begins haunting her. Together they work to figure out what summoned him from the past to Maggie’s side, while the author leaves unanswered the question of whether Maggie is going mad, experiencing a genuine supernatural visitation, or knowingly providing her active imagination with a narrative device to help herself make sense of the unexplained gaps in her family’s story. Naturally, the ghost helps her with her Hamlet homework.

While Thrash’s previous memoir, Honor Girl, thoughtfully and beautifully explored the author’s coming-out experience at summer camp, Lost Soul, Be at Peace tackles more difficult narrative territory. Likewise a story of self-understanding, the journey Maggie takes in this text is less about finding an identity and more about realizing that growing up entails a series of deaths, as your experiences and choices lead you to become a new person, and the person that you were before becomes something of a stranger. In one scene, she finds a story she wrote at age seven about wanting to become a cat named “Clody Bar” (“What the hell is a Clody Bar,” asks sixteen-year-old Maggie); in another, she points to the marksmanship certification she earned in Honor Girl as evidence of her ability to defend her home, but her father’s terse request that she put his rifle back where she found it suggests that the sense of self she gained at camp is already in the distant past.

Lost Soul, Be at Peace can be understood at least in part as an answer to the questions queer theorists like Kathryn Bond Stockton and Jack Halberstam have raised about the pathlessness facing queer individuals trying to navigate social spaces defined by heteronormative narratives. Thrash’s skillful paneling, varying between claustrophobically-dense scenes and borderless vignettes, effectively captures this sense of being constantly surrounded yet constantly alone. Her original, challenging, tragicomic story forges new territory in the world of queer storytelling.