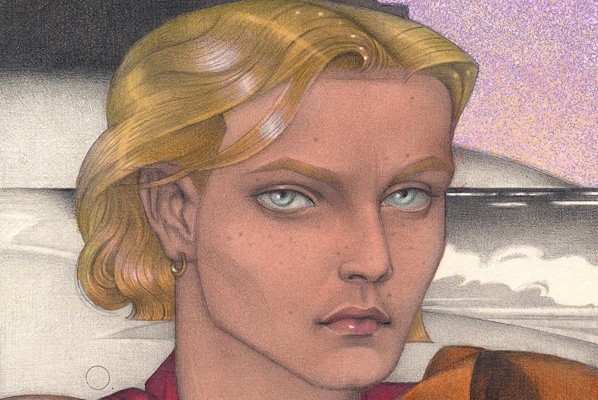 Mel Odom has a new retrospective at Daniel Cooney Fine Art in New York, and Hynam Kendall interviewed him about it for Another Man. He told Kendall how he got started doing book covers:

The first book cover I ever did was for a book called Nocturnes for the King of Naples by Edmund White and it was a very, very successful book. It was a picture of a guy but I drew him as a love object not as a lust object. I drew him the way people generally depict women – I made him very sensual. I was doing the anti-Tom of Finland, and depicting men and male love in a dreamy way. I think I helped change or add to the queer aesthetic in this way: with softness. With no hardness at all.

David Canfield at EW spoke with Carmen Maria Machado about her upcoming memoir, In the Dream House, about “a relationship gone bad.” As Canfield writes:

In writing about a personal experience of queer domestic violence, Machado quickly realized she was exploring a topic that typically goes ignored. “There’s this weird element of it, which is that I was in a relationship with another woman, and I feel like I haven’t really seen that represented anywhere or read that anywhere,” she explains.

In the Dream House will be published by Graywolf Press on October 1. Head over to EW for a first look at the book’s cover.

The 2019 PEN America Literary Awards Finalists have been announced. Several LGBTQ books made the list, including Alexander Chee’s How to Write an Autobiographical Novel; Akwaeke Emezi’s Freshwater; and Imani Perry’s Looking for Lorraine: The Radiant and Radical Life of Lorraine Hansberry, among others. You can see the full list of finalists here.

Cover of The Third Sex (via The Paris Review)

First published in Berlin in 1930, The Third Sex circulated in the final years of the Weimar Republic, Germany’s democratic experiment between the wars. After the Nazis seized power, they destroyed the publishing house, and the magazine was largely forgotten. As a result, most accounts today name fifties America as the birthplace of trans periodicals.

Dorothy Beam, LGBT-rights activist and archivist of the writing of her son, Joseph Beam, died on December 26. Rest in peace.

NBC has a new musical drama in the works, based on the real-life story of Lou Volpe, a teacher in Levittown, PA, who revitalized the small-town school’s theater program. The show is based on Drama High, the book by Michael Sokolove about Volpe, but according to Isha Aran at Splinter:

There’s just one thing: The real Lou Volpe was a closeted gay man—he came out later on in life—but his television adaptation, Lou Mazzuchelli (played by Josh Radnor) will not be.

Aran goes on to explain that Jason Katims, the show’s creator, said that “he changed this aspect of his main character to be able to connect with the story, but that he didn’t want to ‘shy away from issues of sexuality.'” 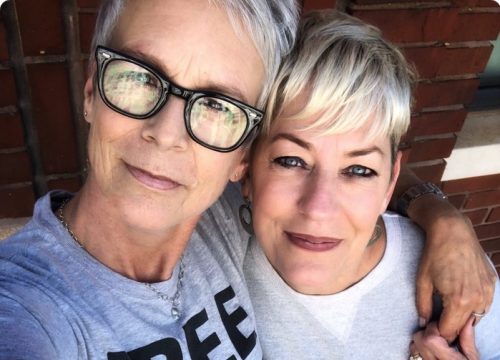 Sara Cunningham, who offered to attend LGBTQ weddings as a ‘stand-in mom’ when participants’ real moms refused to be there, will now be the subject of a movie. Alex Bollinger at LGBTQ Nation reports that Jamie Lee Curtis has acquired the rights to Cunningham’s 2014 memoir, How We Sleep at Night.

And in more good news, the Mellon Foundation has awarded two grants worth $2.2 million to the Academy of American Poets. Sara Aridi at The New York Times has the story.

Now that we’re in the new year, it’s time to start thinking about 2019 books! Several LGBTQ books made The Millions’ list of most-anticipated books for the first half of 2019, including Marlon James’ Black Leopard, Red Wolf and Mesha Maren’s Sugar Run, among others. Meanwhile, take a look at Autostraddle’s list of science fiction and fantasy books with queer poly relationships, and Book Riot’s lists of books about gender identity and upcoming queer YA books. And for your poetry fix, don’t miss Luther Hughes’ list of poetry books coming in 2019 by queer people of color.

Featured image by Mel Odom via Another Man

“I want no ending,” and Neither Will You: 'Chord' as Continuation and Expansion of Rick Barot’s Exce...
Poets Respond to the Rescission of DACA
'The Evening Chorus' by Helen Humphreys