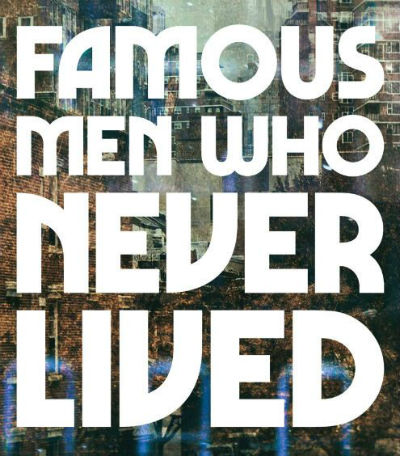 Imagine New York City—the streets, the landmarks, the neighborhoods, the architecture—and now imagine it slightly askew: the names and places and atmospheres all familiar, yet different. This is the predicament Hel and Vikram, the protagonists of K Chess’s debut novel, Famous Men Who Never Lived, find themselves in when their reality is destroyed by nuclear catastrophe and they are chosen as two of the Hundred Fifty-Six Thousand “lucky” ones to cross into another dimension in the multiverse, to today’s New York City via “the Gate.”

For the residents of Famous Men Who Never Lived, life is split into the Before and the After, a mysterious conflagration of events that sent reality on different trajectories for each layer of life in the multiverse. And here, in this very readable science-fiction book, two of those layers collide. The result is not necessarily pretty.

The UDPs (Universally Displaced Persons) are refugees, many of them unable to settle into the new life they’ve been granted, all of them made to feel “other.” There’s the required Reintegration Education classes, the discrimination, the disdain, the leering fascination to contend with; not to mention the emotional trauma and isolation of suddenly finding themselves alone and out of their element.

Hel and Vikram—both UDPs—have found each other in this new reality, and through Vikram, a former professor who brought a suitcase full of books with him through the Gate, Hel discovers the work of Ezra Sleight—a successful writer from their original multiverse, but merely a boy who died at the age of 9 in this other one. Hel, who in her past life was a surgeon, suspects that Sleight’s death was one of the first events to split the Before and After, but finds it hard to get others to care about her hypothesis, mostly because people “prefer to keep it simple. To view [UDPs] as a problem.”

After finding Sleight’s boyhood home, Hel becomes obsessed with the idea of building a museum of UDP artifacts, an idea that is met with indifference by those wealthy and influential enough to help her make it happen. In her crusades, she “loses” the only copy of The Pyronauts, Sleight’s sci-fi, anti-colonial masterpiece. Vikram, in the meantime, befriends the current owner of Sleight’s boyhood home, and steadily uncovers clues to the mystery Hel is so interested in solving.

If this all sounds a bit confusing, that’s understandable. While Chess’ language is adept, and her worldbuilding is meticulous (almost overwhelmingly so sometimes), the plot of Famous Men Who Never Lived is somewhat complex and at times feels like it is attempting to accomplish too much. Interspersed with Hel and Vikram’s narratives are oral histories from a variety of UDPs, as well as select passages from Sleight’s The Pyronauts. It’s these latter that perhaps convolute the plot more than they help it – the emphasis on The Pyronauts serves to highlight the importance of cultural touchstones within a community, which comes across without including the passages. But, really, once you’re in Famous Men Who Never Lived’s world, following alongside the funny, interesting, and sympathetic characters, the occasional “huh?” moment recedes and the story races along to a surprising climax.

Famous Men Who Never Lived, alongside an inventive and compelling narrative, offers an empathetic and fine-tuned commentary on displacement and otherness. Vikram and Hel’s plight finely illustrates one of our current time’s most pressing issues—how to deal with refugees, immigrants, and other displaced peoples—and creates a fictitious world that shows us, glaringly, how easy it can be to fail to serve them. The novel is a wonderful example of how fiction can illuminate reality—and a stark reminder that we are all human, deserving of dignity and respect, no matter the country or dimension from which we come.

'One in Every Crowd' by Ivan E. Coyote
'The Women of San Quentin: Soul Murder of Transgender Women in Male Prisons' by Kristin Lyseggen
“What if I risk/Taking the head of death/Here in the dark, far/And deep”: Jericho Brown Adds Risky, ...