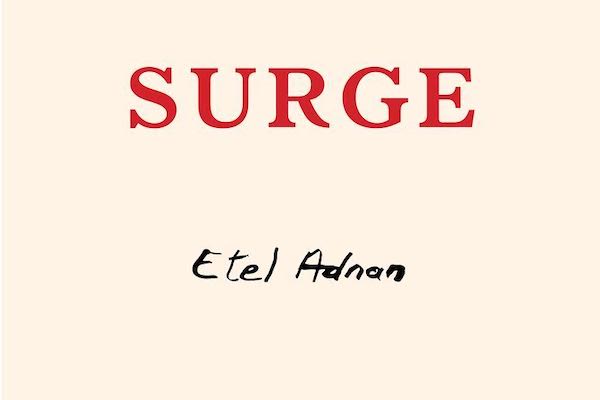 The work of Etel Adnan—poet, painter, philosopher—is an interrogation of the human experience and a study in worldly engagement. Surge, her latest book of poetry, is aphoristic and personal, a consideration of consciousness and reality grounded in the movement of a poet through her house at night. Sorting through decades of memory, loss, and linguistic turns, we drift with her in a sea of thought and expansive meditation.

The book is a series of untitled paragraphs that immediately place us in a pool of matter-of-fact weltschmerz:

Thoughts are metallic and melt in salt water. Their frequency increases the melancholy, the pervading melancholy […]

We have a few certitudes to lay our shoulders on, and still we go on opening the shutters, welcoming friends…in cities left-over by wars…

The particular shutters in one poet’s windows open into a wide take on what we can know about our own perception. “A simple question can raise reality’s temperature,” Adnan writes, introducing readers to her investigation of human scale. “Napoleon was indeed the Spirit of the World, as Hegel had wanted him to be, of its ever youthful violence, and mega-weapons followed, and dying lost meaning.” From a domestic bookshelf to redwoods and stars, we move from thinking about the Phenomenology of Spirit through the dissolution of the physical world.

This voyage is a continuation of Adnan’s ongoing trajectory. Her previous book, Night, was a fragmented kind of astral projection, the speaker floating in mind and space. Surge focuses on the experience of that setting off. “Oh to enter reality like a boat does the night!…I swim in “night” the largest of all oceans.”

Underwater, as in space, sound takes on another texture. Senses aren’t deprived so much as turned inward, layered with inquiry that (re)discovers the poems within Adnan’s thought patterns:

Music is the vibration of time itself in an uninterrupted surge, the modulation of thinking, the moon’s hidden side.

Here the title emerges and readers are let into a process that reaches beyond aging and attuned analytics. Still, it isn’t long before we’re brought back down to earth and a realist’s epistemology of climate.

Snow is for the winter. Usually.
[…]
There are no storms over the sinkholes, but tides, yes, immense tides, that never hurry.

Ominous weather pervades the book yet we are never far from emotional eddys of human grief. “It’s hearts that get broken, not waters, not rivers.” That much we know, though perception itself is suspect. “Normally we see rugs on the floor, chairs, probably a dog, but it’s probably all wrong.” It’s unclear how Adnan feels about this “probably.” Our uncertainty could be cause for alarm or a calm possibility of solipsism —on an individual, species, and/or planetary level. Most likely, it’s an existential all of the above.

Given the impossibility of knowing and inexorable dark, there’s remarkable lack of despair in this rumination. The intermittent return to chairs and rugs makes it less a frustrated puzzle and more an intellectual wave pool—what is this stuff we’re swirling in, the sense we happen to be made of, and is that the same question as “from where does life spring?” A conversational den-with-lamps mood relieves us from armchair philosophy as we swim from person to place, rooted by Adnan’s awareness of her own faculties. “Anyway, I don’t “see” ideas, should I?” she asks, going on to note that though the eyeglasses on her brain need a replacement, they’re not necessarily indispensable. There is more beyond what the brain can see; no changing that.

Do our minds really need freshening up when they can’t dissect every letter on the chart, given that we know our data is suspect? Some of the letters are inevitably incomprehensible. Rather than pin down or bemoan our lack of perceptual surety, Adnan builds a nebula for readers to drift about. Her pages are a place for us to submerge, to question ourselves and each other even as we want to reach out and affirm that yes, we saw some nice fish down there—the colors really set off the light. We may not be able to confirm anything on a grand scale but our impulse to communicate minutia is its own dark matter. Definitions are suspended throughout, yet by the end of the book we have gained ground:

We came to transmit the shimmering
from which we came; to name it.

What is a soul, what is this voyage, and can we ever know more than mutual terror, subdued in our circumstances of language and physicality. Adnan brings us to the brink of these questions; her words are a movement toward that frontier.

The crossroads between poetry and philosophy are often cluttered. From the Algerian War of Independence to Vietnam to the current assault on fact and consequence, Etel Adnan’s levity draws on extended, unflinching confrontation with time and earthly drama. In our frenzied historicity, it’s a relief to sink with her below and above the metaphysical surface. In the dark we can find deep space to move between ideas, we have time to pick up the paperweight and examine its angles. Life, thought, and expression distill into a verb-sound: Surge.