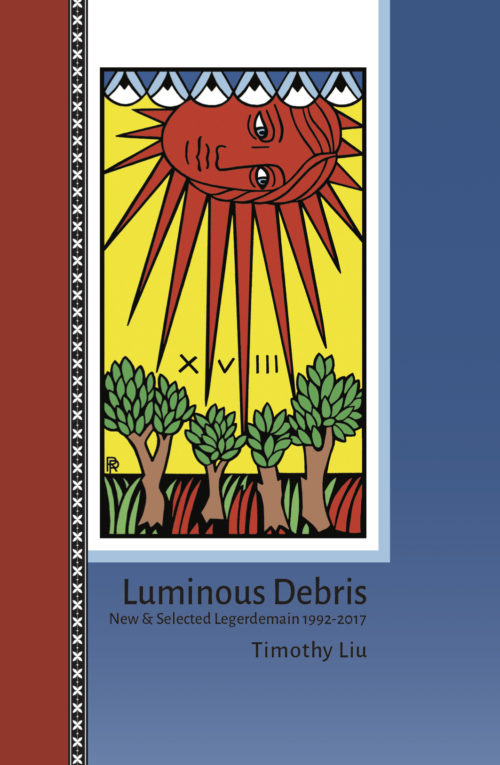 […] All art is an afterthought,
an attempt to interpret a dream
that by its nature is perfected,
the bed unmade, and me almost late
to my next appointment where more of me
must get cut out. The horror […]

Timothy Liu’s Luminous Debris: New & Selected Legerdemain ranges from poems of war to poems of marriage, offering a lifetime of memories & interpretations for the reader. Lines such as “Was the body only messenger to the message?” resonate through pairing simplistic language & evocative image, while other poems sprawl with religious & mythological allusion or observational litanies. Each poem marries form & content in its own right: traditional forms like the villanelle appear next to short poems hinging on enjambment; poems sprawl in pages of sections near others that are sparely contained & equally stark. Luminous Debris demonstrates Liu’s broad poetic range & mastery of craft.

The collection is formatted as a poetic deck of Tarot. This format hinges & furthers Liu’s thematic investment in images of communication: both metaphysical & mechanical. From conversations with spirits, to channeling memories of past relationships & “past lives,” Luminous Debris is a collection of worlds lived, worlds forgotten, & worlds that have passed us by. Some of the most surprising moments in this collection are where the line between human & object communication bleeds into itself. This line effaces in the poem “Vox Angelica,” where a woman’s weeping becomes “a sound as if made by a machine/ that played again and again/ like a tape she could not erase”  & again in Liu’s meditation on 9/11, “For Dust Thou Art”, where the phone’s busy signal morphs into a metacommentary on the role of language & desire (“Are you able to get through?/Are you still trying to get through? And what could you possibly say that hasn’t been said already?”).

The book addresses 9/11 & the Bush years as well as the tragedy of the Nanking Massacre. These poems not only speak to the personal trauma of memory, but also speak to the hazard of documentation, collective memory & erasure. Liu writes: “History but a pile of drowned-men’s bones. Its engine running like a well-tuned ambulance.” Throughout the collection, personal history is also subject to misinterpretation & misrepresentation. As Liu writes in Orpheus at the Threshold, “Descriptions of the act more memorable than the act itself.”

This collection meditates on the tough questions: the role of desire in love, how to grapple with memory, and how to navigate communication & its various breakdown. If all art is “an attempt to interpret a dream,” then Liu places us firmly on the unmade bed. The subconscious, memory, and the realized physicality of the world are all unpacked with an astute and unflinching eye.