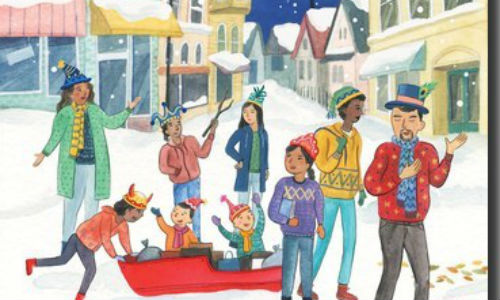 From the deft pen of the multitalented, award-winning writer Emma Donoghue comes the highly enjoyable second entry in her children’s chapter book series (readers 8-12) about the Lottery family, The Lotterys More or Less.

The Lotterys, introduced in The Lotterys Plus One (2017) are the epitome of multicultural with two moms—one West Indian and one Indigenous—who are a couple, and two dads—one from Delhi and one from the Yukon—who are a couple, plus seven kids–adopted and biological ranging from age 16 to 1 year. Add to that one octogenarian grandfather and a menagerie of pets.

Several years ago the two couples, already friends and having their first child together, found a winning lottery ticket that allowed them to quit their jobs and focus on raising their growing family. The combined family changed their last name to Lottery. The children are all named for trees, although some use nicknames, e.g., Sic is short for Sycamore and Wood for Redwood. The entire family lives in a large old house in Toronto they have named Camelottery. The Lotterys More or Less picks up later in the same year as the first book.

Narrated by the nine-year old Sumac Lottery, The Lotterys More or Less is a holiday story. It opens on the day of Winter Solstice with Sumac’s high anticipation of a perfect Christmas season filled with her favorite Lottery family traditions. Indeed, Sumac has created a special glitter-filled calendar of the next week’s festivities with detailed notations including the departure of their couch surfer Luiz from Brazil and the return of one of the fathers (PapaDum from Dehli), along with the eldest child, Sic, from India.

Bright and thoughtful, Sumac is a source of “fun facts” and the earnest keeper of family history and traditions. For example as the family stops on the way to the Solstice Parade for ice cream, she muses, “In winter there’s no line, because most people don’t think of buying ice cream when it’s cold. But actually, a fun fact Sumac knows is that the fat in the ice cream warms you up.”

However, Sumac’s best laid plans—the Robert Burns reference is actually discussed by the family in a moment of surprise engagement and clarity from Scottish born and reared Grumps—will go awry when a sudden record-making ice storm coats Toronto with ice causing fallen trees, fires, cancelled flights, and massive power outages. While out sledding with Catalpa, Luiz has an accident that will result in his remaining with the family for at least five days regardless of the weather. PapaDum and Sic’s return flight is cancelled.

The foursome of co-parents are an impressive team. Clearly they long ago reached agreement on their approach to rearing their children. Each  parent provides specific knowledge, skills and temperament to the family. PapaDum is the primary chef and handyman in the household which means his absence presents amusing complications for the typical workflow.

All these changes are disastrous in Sumac’s opinion. The fifth child of seven and a smart girl of 9 years, Sumac struggles to be accepted as a “bigger kid” rather than a “little.” She has to grapple with her high expectations for the holidays, her disappointment that they didn’t turn out as planned, adapting to new situations, and finding enjoyment in the moment with the company of loved ones. The family does make efforts to continue some of the “traditions,” like the Saturnalia dinner. Improvisation plays a strong role in the menu. For that matter, all meals without PapaDum are a bit sketchy and the Christmas tree is a decorated portion of the ice-damaged maple tree from the front yard.

In addition to the open and accepting view of multiculturalism, the vibrant and blossoming immigrant culture of Toronto plays a prominent role in the Lottery world. We see this in the Solstice night parade, the family volunteering to canvas neighborhoods checking on residents without lights or heat, the crowd at a warming center where some of the family spends one night, and the Lotterys’ many and varied neighbors.

Caroline Hadilaksono, the illustrator of the first Lottery book also returns. Her energetic full color cover art depicts the family out in the snow. Her charming gray scale illustrations appear throughout the book both in full pages featuring important scenes and smaller in-sets–often in interesting silhouettes. There is also a cheerful, candid, and helpful family portrait with parents and kids identified before the start of the story.

Events and family discussions often bring up new words and concepts for Sumac that provide young readers with the vocabulary building and emotional growth opportunities that one should expect from high quality, challenging children’s books.

The Lotterys More or Less is a delightful and festive story.The banter and activities in a household of 12 are amusing and often punctuated with non-sequiturs. Donoghue provides heartwarming insight into the chaos and love of a large family. The Lotterys More or Less will make an excellent addition to anyone’s holiday traditions. The series is a must for any public library with a strong children’s collection.