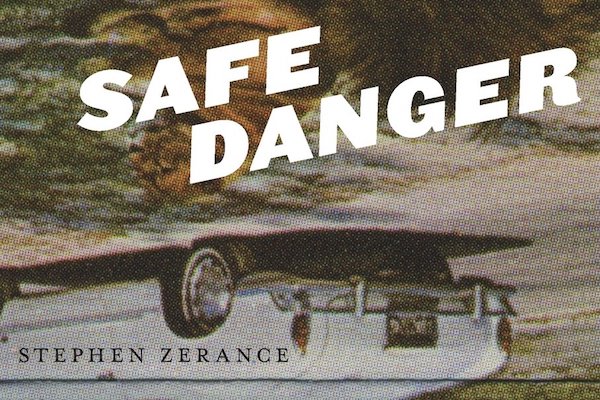 In Safe Danger, Stephen Zerance delivers a volume of poetry that is singular in style and vivid with emotion. It’s a very personal collection, and while Zerance writes of situations both varied and disparate, his energy and spirit can be felt in throughout. These poems are something of a mirror into which the poet gazes, not always liking what he sees, but always capturing his truth. There is a violence that comes to the surface, but it is not gratuitous–just reflective of American culture today.

One of Zerance’s skills lies in the cadence which drives his verse. The lines flow and stop with great ease and clarity, and the reader is either carried along or awakened to the point he’s making. At times, his fluid style echoes the rhythms of popular music, as in the opening stanza of “How to Begin”:

Strip your life
as Venus and Mars align,
catching you
staggered as traffic
swims the wrong way
down a one-way street.

The poem flows like a pop song, and could almost be set to a modern beat, but there’s nothing trite or predictable about it. He brings this modern context to his themes as well; an ode to the mugshot of Lindsay Lohan could have been cliché, but under the poet’s care becomes a thought-provoking contemplation of self-worth and -esteem.

Zerance reflects on the turbulence of contemporary American life, often finding a strange beauty in it. The body is cleaved and sliced, then reassembled to be made whole again. He writes of the corporal in poems such as “Marsha’s,” describing complex feelings and thoughts about self-worth, and that violence is always lurking under the surface, as when he describes his body as “skinned alive” or “knife thin.” One of the most moving poems in this collection is “Inside,” where he describes the clothing innocuously hanging in a father’s closet as explored by his child; again, the violence is just underneath the perfect order, this time in the form of an old war rifle. It’s hidden away, but cannot be forgotten.

Also, Zerance examines the urban gay male’s obsession with the body and all things related to the gym in “Diet of the Saints”:

For the first time I look vulgar,
blown up muscles down my V,
I make love to myself all night.

The poem depicts the vanity of gay men without forgetting the insecurity and human need that drives them in their quest for perfection.

The collection also addresses the AIDS crisis, the best example of this is the poem “Gay Fiction,” in which Zerance pays moving tribute to those lost, even seemingly referencing the title of Edmund White’s masterpiece The Farewell Symphony at one point, one eye always to the past.

Zerance’s work is imbued with a classical style while maintaining an engagement with the modern world. There is much rhythm in his words, and it’s a rhythm that carries the reader to the unique conclusions that he draws. His poetry shows us that modern life is neither boring, nor artless.