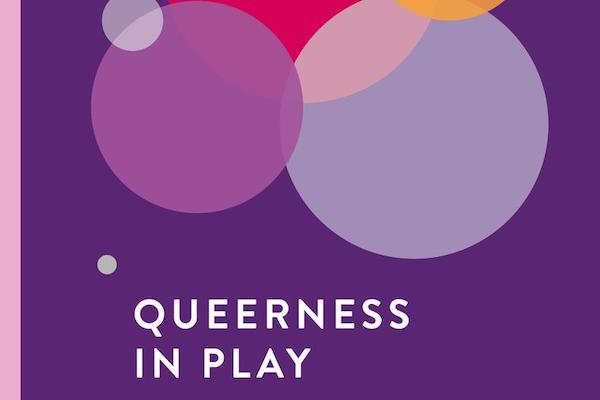 In both queerness and games, the idea of boundless freedom is a mirage, but also for both, there is meaning in exploring the possibilities that occur within the boundaries, especially when that exploration allows to us to see the ways in which those boundaries can be tested, expanded or reconfigured.

It makes sense to examine the rules of one world, to see the expansion of possibility in another.

Where Queer Games Studies, a prior collection of studies and essays taking a snapshot of the field, was something of a hub or a showcase of the many different areas to explore within the young but growing field, this collection has a slightly tighter focus. As the title Queerness In Play implies, the studies and essays presented are interested in both sides of the screen and the interaction between the two. Even when taking a close look at characters in virtual spaces, authors are also shedding light on players’ actions with and towards them inside games and reactions to and conversations around them outside of the games.

Sorted into four parts, “Queer Foundations,” “Representing Queerness,” “Un-gendering Assemblages,” and “No Fear of a Queer Planet: Gaming and Social Futures,” the book examines present, past and potential states of play, players and player avatars.

The first section includes two examinations of games studies itself. Sarah Evans, in “Queer(ing) Game Studies: Reviewing Research on Digital Play and Non-normativity,” presents research into the amount of work regarding queerness in games studies has been published, and in “Envisioning Queer Game Studies: Ludology and the Study of Queer Game Content,” Evan W. Lauteria makes a case for the importance of applications of queer theory in game studies.

“Representing Queerness” examines both characters that players can control and those they encounter and interact with, ranging from those that explicitly identify/are identified to be within the LGBTQ assemblage to those that provide space to examine queer themes. In the former category, there is a look at the portrayal of two characters, Ellie and Bill, from The Last Of Us, a discussion of the lack of same-sex romantic relationship options in the life-simulation game Tomodachi Life, and an examination of how androgyny is ‘allowed’ in protagonists while, in contrast, gender-variance is portrayed in a villainous light. As for queer subtext, there is a survey of gender performance of the various heroes of the Final Fantasy series, an analysis of the reveal of Samus’ appearance underneath the armor in Metroid in relation to similar ‘revelation’ narratives in other media, and a discussion of the discussion surrounding Zelda’s gender identity as Shiek in The Legend of Zelda: Ocarina of Time (and other appearances).

The latter half of the book focuses on the players and the act of play as well as the changing environments for play. Where “Un-gendering Assemblages” takes a look at individual roles and play, “No Fear of a Queer Planet: Gaming and Social Futures” considers gaming communities, small and large.

“Cues for Queer Play: Carving a Possibility Space for LGBTQ Role-Play” looks at the various paths and hurdles for queer roles and queer players in table-top, video game (offline and online), and real-life roleplaying games. Nathan Thompson looks at the gay MMORPG ‘mod’ scene in “‘Sexified’ Male Characters: Video Game Erotic Modding for Pleasure and Power” and how it provides a digital mirror to real-life politics of desire. “Let’s Come Out! On Gender and Sexuality, Encouraging Dialogue, and Acceptance,” presents a case study using a board game, Let’s Come Out!, which requires players to roleplay certain identities, to encourage discussion and self-reflection about assumptions and actions.

“The Abject Scapegoat: Boundary Erosion and Maintenance in League of Legends” examines the gender policing of an e-sports player amongst the game’s players and media. “Outside the Lanes: Supporting a Non-normative League of Legends Community” looks a how members of an LBGTQ friendly e-sports club at a college attempt to create an inclusive space and time. “Out on Proudmoore: Climate Issues on an MMO” discusses the creation and social maintenance of the titular LGBT-friendly server in the massively popular game, World of Warcraft.

This collection does a lot to make it recommendable for those interested both queer and game studies. It provides various angles to understanding queerness using the stories and characters presented in games. It showcases an impressive effort of in-depth research as well an appropriate familiarity with the medium. And, it situates its discussion within appropriate contexts, often in the form of player discussion.

However, I must note the reliance on using or examining popular series, something which arguably leads to a slightly inaccurate picture of queer representation in games. It makes sense to use popular series and games to write about: authors are limited by both publishers’ and readers’ varying levels of knowledge regarding video games. Additionally, more popular games reach wider audiences which in turn provide more things to analyze. However, in a time when indie games can sometimes take up equal mindshare as mainstream “triple A” games, it seems odd that those made by smaller studios, like Undertale or Dream Daddy, aren’t discussed alongside other games.

Media is often a mirror for audiences, presenting a version of the world on screen, on canvas or on the page. Unlike most other media, however, games allow for (increased) interaction with the creation. In addition to the work itself and the reaction to it, another facet to be studied are the actions one can take in relation to it. And, in the case of online gaming, the media is less a separated reflection, but an extension of the tangible world.

As the games industry continues to grow and the field of queer games studies continues to widen, solid foundational texts are needed. Queerness In Play is a deeply researched guidebook whose authors deftly navigate multiple contexts and whose editors understand that game studies is not just an examination of other worlds but our own as well. And while it can only cover so much ground, it also does an effective job of inspiring future work.