‘In Development’ by Rachel Spangler

‘In Development’ by Rachel Spangler 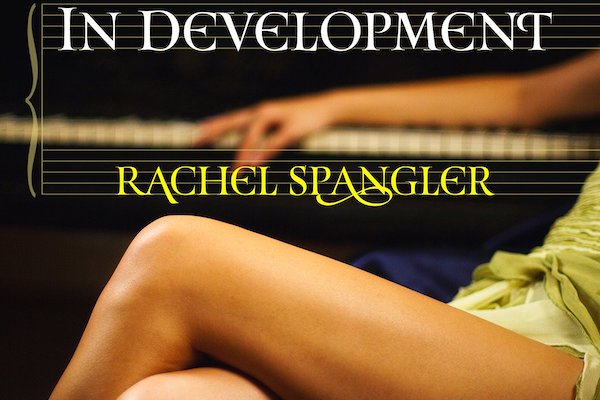 “First times matter. They set the expectations for everything that comes afterward.” So Cobie Galloway will explain to Lila Wilder regarding the reason for the time and place of their first kiss in Rachel Spangler’s new book, In Development. That kiss is not the only first time explored in this contemporary romance.

Wholesomely beautiful, Cobie is an actor who has spent the last decade playing high school cheerleaders and other girl-next-door types in the movies. At 26 years old, she is itching to explore more complex and mature roles before she is too typecasted to change and her career becomes relegated to the Hallmark channel. Remarkably grounded and healthy for a former child star, Cobie has maintained a low profile in her personal life despite being openly lesbian. That low profile needs to change if she wants to convince producers she can play the role of a complex and morally ambiguous lesbian lead in a major film adaptation.

Although she is also 26, Lila Wilder, a highly successful singer-songwriter and performing diva, is quite the opposite. She works to keep herself at the top of the music scene and on the cover of the entertainment magazines. Highly talented and artistic–she has her own line of designer clothing and fragrances–Lila is all about The Image. She tells Cobie, “They’re always going to try to pigeonhole us. You can either pretend that isn’t true, or you can create the box you want them to put you in and refuse to fit anywhere else.”

A rich and famous prima donna of the first order, Lila has cultivated a reputation for dating and discarding the current most eligible male star. The truth is those relationships are very deliberate, shallow, and mostly pretense. The press has become bored with her “man-eater” reputation and she needs something fresh to grab their attention.

When Cobie and Lila’s agents, the dynamo firm of Levy & Levy, suggest another fake romance, Lila isn’t particularly interested. That is until they suggest that fauxmance be with Cobie. The media’s take that bisexuality is novel and the titillation of two rich, famous, and beautiful women might be just the thing to refresh Lila’s brand. She sees this ploy as nothing more than the latest contrivance like her previous affairs.

Initially and despite her desire to change her career, Cobie seems as naive as the ingénues she’s played. However, her ten years in an industry fraught with sexual abuse of its talent have forged in her a steel frame. Cobie has maintained her sense of self and her values. She loves her family and friends and is loyal to them. She treats people with respect and genuine kindness. She feels that even in a fauxmance, the leads can care about one another.

Further, Cobie can act and she does understand the plot of their little ploy. To Lila’s surprise, Cobie contributes easily to the sexual tension of their first date, dinner at a Greenwich Village pizzeria. Cobie teases Lila with a taste of her dessert for a perfect photo-op. As Mimi Levy later describes, “Your girl handfed a man-eating lioness. Oh look, there’s a picture.” It is increasingly clear that Cobie might not just be playing a part with Lila as shown in that first kiss. A kiss that pleases and annoys Lila who “… didn’t like surrendering control even for a second. She didn’t like the unexpected, and everything about Cobie’s kiss had been unexpected.”

Lila’s family of choice are her personal assistant and stylist, Felipe, a flamboyant queen who has known Lila since childhood, and her bodyguard, the large and intimidating Malik, Felipe’s lover. The banter when these three are together is quick, witty, and often double entendre-laden. Indeed the dialog is frequently quite funny. I laughed out loud several times reading In Development.

Lila’s ambivalence after that first faux-date has her feeling oddly lonely and uninspired to write a love song needed for her current project. In response to Felipe’s teasing, she defends her single status saying, “Men are trifling and tiring. I’m building a damn empire. I don’t have time to properly torture someone for real, and that’s the only way you can truly hold their interest.” While Lila initially feels flirting with Cobie might be similar to flirting with a man, Cobie’s expectations on the emotional connection are quite different, putting Lila on uncertain ground.

Spangler presents several thoughts on the challenges of success –commercial and personal–for artists today. As Lila says, “Unless you want to be a starving artist or a hobby artist, you have to have a market, and to have a market you have two choices: you can find one or you can create one.” The single-minded Lila has done both. Another singer-songwriter, Cordelia, provides an interesting foil to Lila’s hard-driven glamorous life. Cordelia confesses to Cobie:

I’ve made plenty of money to live really well. I could never record another thing and be fine. I don’t need the fame or the fans or the contracts anymore, and knowing that, really being okay with what I have, has given me a tremendous amount of freedom and peace and contentedness.

As a romance, In Development is deliciously more complicated than expected for the fauxmance trope. Spangler’s characters have depth. Both women have secrets that motivate their personal agendas. Lila’s determination to keep Cobie at arm’s length while controlling as much of the relationship as possible leads to intentional and accidental miscommunication. We suspect a history between Cobie and her best friend Tal and there is the mystery of Selena who receives a monthly check from Lila. Despite Lila’s highly managed glitter life, she regularly and covertly visits the cancer floor of a local Children’s Hospital.

The sizzling connection between Cobie and Lila and the erotically charged love scenes with the more complicated journey toward a possible “ever after” make In Development an engrossing page-turner romance that kept me up past my bedtime. Spangler explores several current social issues including the #MeToo movement. Most powerful is Lila’s realization that their fauxmance has the potential to mean something to her LGBTQ fans, that her attraction to Cobie clarifies her own identity as bisexual, and that Lila is in a place to make a difference by coming out publicly. On some level, this decision will change Lila more than she knows. There’s lots of fun In Development here and it’s definitely worth the ticket price.