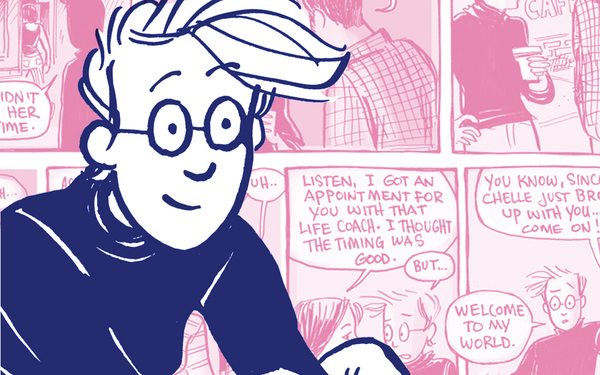 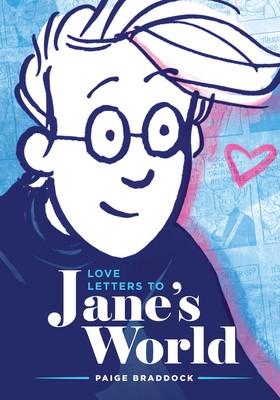 Getting into a long-running series can be daunting, especially if it’s been around for twenty years, like the brilliant Jane’s World by Paige Braddock, which recently ended. Luckily, Braddock’s given us an easy way in with Love Letters to Jane’s World, a special twentieth-anniversary collection that is a perfect sampler of the fun and quirky comic strip.

Jane Wyatt is a sweet, likeable butch trying to navigate her way through the choppy waters of love, life, and career. She’s surrounded by a cast of friends and lovers that include Jane’s roommate Ethan, her sort-of-ex and sometimes mild antagonist Chelle, her best friend and sweetheart Dorothy, and a bunch of other friends, coworkers, family members, and love interests for them all. (If the idea of keeping track of all the different characters makes you nervous, there’s no need to fear because the book comes with a handy guide at the beginning.)

Jane struggles to decide what she should do with her life as her career brings her from a newsroom to a corner store and back again. Braddock takes us to some seriously fun places on that journey, like when Jane grapples with wanting to become a cartoonist and an artist “helps” her out, leading to consequences within the comic itself when he breaks the narrative’s boundaries. These boundary-breaking moments may be hilarious, but they’re especially noteworthy when they present incisive commentary, like when one of Jane’s colleagues at the newspaper complains that he’s portrayed as a typical straight dude simply because he’s in a women’s comic and Jane controls the script.

Jane’s day-to-day life can be a little or a lot more dramatic than ours, since it’s often complicated by things like being abducted by aliens. Even so, she’s still dealing with the same issues as everyone else in the queer community. Jane is openly gay and has been since the beginning, living her truth and experiencing the anxieties that have been part and parcel of being a lesbian in America over the last two decades.

Thankfully, Jane’s support system is rock solid, even as they (usually lovingly) poke fun at her. Whether she’s being sent to a life coach by Dorothy or getting a makeover from Chelle, the people around Jane genuinely care for her and want her to do well. The makeover is a particularly great example of that, because Chelle is careful and makes sure Jane is still herself at the end. It’s these relationships and how they play out, with their moments of genuine care and kindness, that give the series tremendous heart, making it more than amusing escapism.

So, what are the love letters to Jane’s World anyway? The book is peppered throughout with quotes and commentary from people who share what the comic meant to them. Some are from readers, like one who felt seen when she found Jane’s World in her local comic shop as a kid, and some are from other comic creators and industry people like Alison Bechdel, Shannon Watters, and Terry Moore. Placing them alongside Jane and her adventures ensures readers not only gets a sense of who Jane is and what her journey is like, but also the impact that they’ve had on readers and the industry alike.

If Love Letters to Jane’s World leaves you wanting to go back to the beginning and glom the entire series, you’re in luck. There are currently twelve volumes in print, as well as a spin-off novel that was published by Bold Strokes Books in 2016. And if reading one comic strip a day is more your style, well, there’s good news for you too, since the website GoComics is running it again from the beginning as of November 5.

Paige Braddock gave the world a gift when she created and shared Jane Wyatt, and she gave us yet another when she created Love Letters to Jane’s World. It’s the perfect way to enjoy some of Jane’s greatest hits, whether you’re a diehard fan or someone who’s ready to finally see why so many people love it so much. While it’s sad that we’ve all had to say goodbye to new adventures from Jane, it will be exciting to see what Braddock creates next.