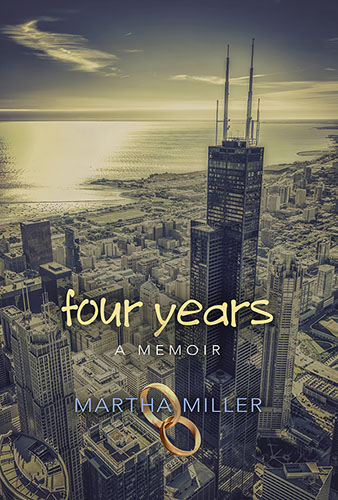 I rarely speak about it, but when I was a relatively young lesbian, a girlfriend locked me in her apartment for three days because she was certain that she could convince me that I was in love with her. She was not physically abusive, but she scared me more than I could admit at the time. I escaped only when her sister came to visit and my girlfriend was too embarrassed to admit I was her prisoner. It took me years to get past telling that story as a joke and to admit that it took me right back to my adolescence and being the prisoner of my stepfather, the man who did physically abuse me. Hardest to admit was how passive was my response. Part of me was convinced I was saving my life by not fighting back too hard. Most of me was just ashamed.

In her new memoir Four Years, Martha Miller provides an x-ray examination of these cycles of abuse and shame. The book provides an unvarnished portrait of the author’s own struggles within a troubled and violent relationship. Set in the mid-1980s, Miller, newly sober and just coming to terms with her sexuality, embarks on a new relationship with a woman she hopes will provide some sense of solace after years of turbulence. Instead, Martha discovers that her new partner has demons of her own and an explosive temperament to match.

Miller looks at the dynamics of abuse and all the resulting passive responses we take up, in the hope that pretending what is happening is not happening will somehow save us from what we truly fear—being destroyed, and worse cooperating in our own destruction. We tell ourselves this should not be the female condition; and certainly not the lesbian feminist condition. But avoiding confronting the range of ways in which we do not look at abuse changes nothing. Hiding, denying and pretending does not save us.

Miller knows this in her soul. What she has given us in this memoir is an eyes wide open look at just how deep is the damage, and by the by, a complicated look at just how we can change ourselves and our culture. Read this book, take a deep breath, and look again at what we all hesitate to acknowledge.

Michelle Theall: On God, Faith, and the Complications of Writing About Family
The Banal and the Profane: Yvonne Fly Onakeme Etaghene
'A Line in the Dark' by Malinda Lo

Dorothy Allison is the bestselling author of several novels including 'Bastard Out of Carolina', 'Cavedweller', and 'Two Or Three Things I Know For Sure'.