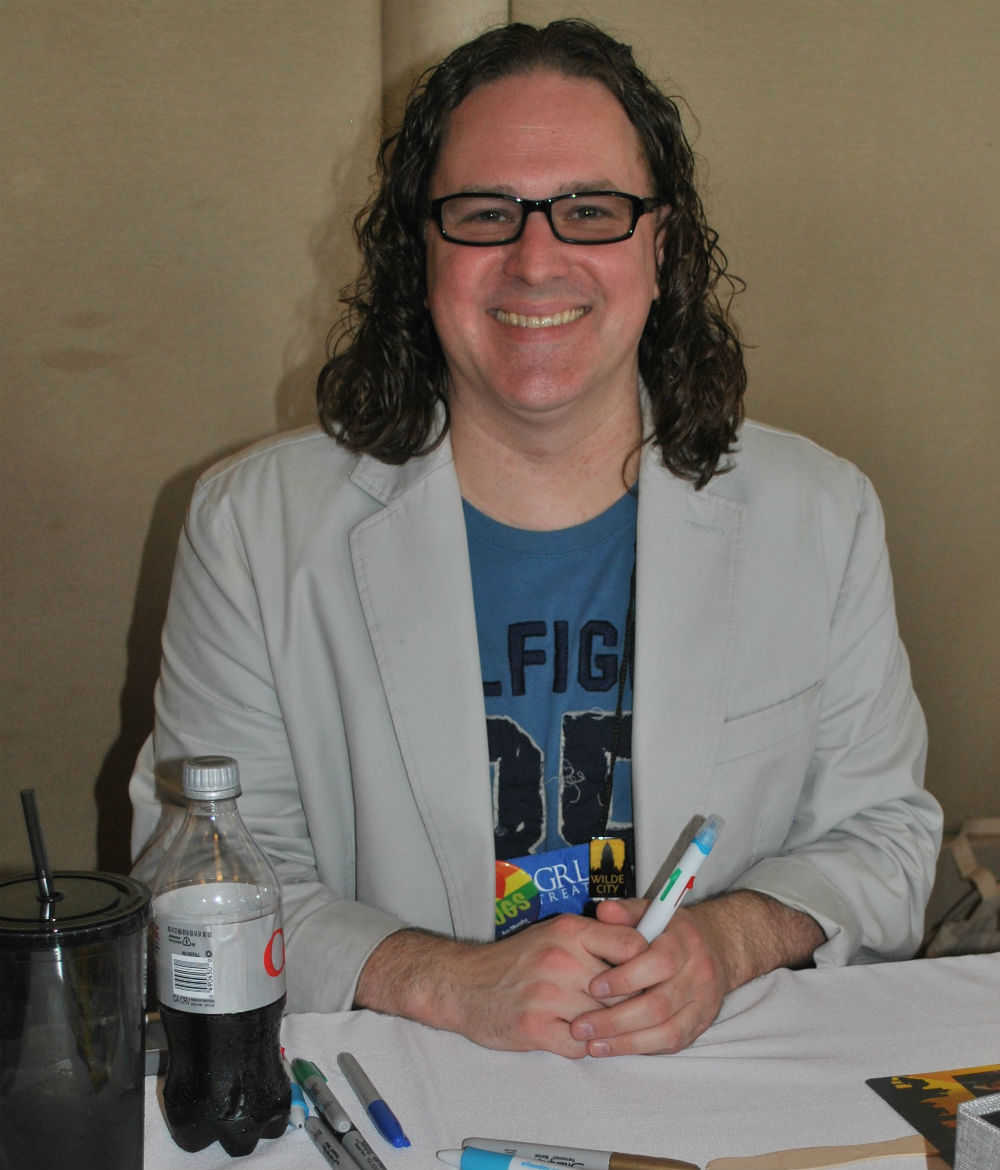 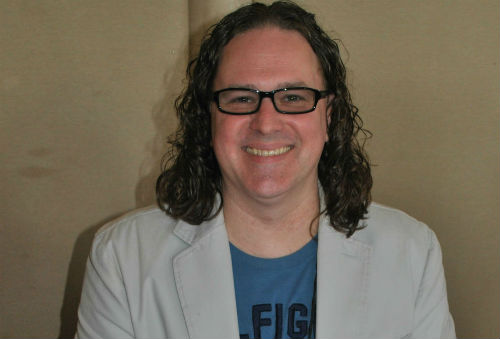 Ethan Day was a romance author and one of the founding organizers of the Gay Romance Literary Convention (also known as GRL Retreat). It was during a recent meeting in Albuquerque to plan the 2019 convention that tragedy struck: Ethan died in his sleep, in Albuquerque, on the night of November 10, 2018, at the age of 47. The cause of death has not been released.

Ethan Day was a friend. I’m not really a social butterfly and I tend to play the wallflower at social events, but Ethan was always the first to welcome me at the GRL conventions and among the last to say goodbye. And that is what happened on October 21, 2018, the last time I saw him. His kindness was one of the reasons I kept coming back to the GRL convention.

Long ago, when he was at the beginning of his career as a romance author, I interviewed him. He was a country boy, all smiles and a big heart: “I am a gay man living in Missouri [….] I can hear the gasps already! How very un-chic of me, yes I know. It was here I was born and here I have stayed.”

Ethan Day believed in love and happy endings. His novels were beautiful; I loved his romantic comedies the best. When I asked him about his private life, he told me:

I’m currently single but always looking for that special someone that makes my heart skip a beat…in addition to being able to put up with my neurotic ass. The worst thing about being a romance writer is finding a real life hottie that can live up to the fantasy I create in my head, and subsequently thrust upon him before actually getting to know the real him. I can hear you getting all judgie…it’s an occupational hazard! To all my past and future boyfriends, my sincerest apologies…I can’t help myself!

He was born on March 9, 1971, and was the youngest of four children and the only boy, and, as he himself admitted, “[…] was spoiled rotten.” But Ethan’s life, as a young boy, was not all pink glasses and glittering rainbows.

“I somehow managed to survive high school living in a small racist town in Southeast Missouri and emerged unscathed,” Ethan stated, “[….] realizing life was too short to pretend to be anything other than who I was. I was the little homo that could…so damn it, I did! It was all very Lifetime Movie Network meets After School Special….”

The first book Ethan read where he was able to see himself was Tales of the City by Armistead Maupin:

What I wouldn’t give to live at 28 Barbary Lane–which is actually saying a lot, considering I hated the fashion of the seventies. I mean really…could they have discovered a more revolting color palette to choose from? I don’t think so! But I’d suffer it all over again to live upstairs with Michael, Mary Ann, & Mona at Mrs. Madrigal’s. I was able to see myself, unapologetically staring back at me from the page. The ever-hopeless romantic, trying on new men–praying one of them would fit–never giving up, no matter how many times I wound up heartbroken and alone.

While I haven’t tried on quite as many guys as Mouse did, I still to this day can’t seem to drive that wishful-thinking-someday-my-prince-will-come-mentality out of my own ditzy head. I keep trying, but no matter how much sarcasm I put on, it doesn’t seem to help. Go figure? Tales is fun, light, at times wickedly funny, and helped me justify a tiny little piece of my own identity as a gay man by showing me I wasn’t so alone after all.

Another story that had a huge impact on Ethan Day was Love! Valour! Compassion! by Terrence McNally:

The story is in my opinion, one of the best and most true depictions of gay men I’ve ever read. I can honestly say I either am or know every single one of the characters and like life–it is at times funny & sad, sexy & romantic, as well as sweet & sarcastic. If you just can’t get into reading the play, then watch the film. For me the play is better, but either way, McNally will have you running the emotional gamut, yet somehow leaving you with this incredible sense of hopefulness.

He attended Missouri State University where he took a Creative Writing course, by his own admission because there were no tests. “For once my scholastic laziness paid off, and I found an outlet for all the fantasies running amok in my head. It was love at first write, and I’ve been doing it off and on ever since.”

Ethan’s first romance, Self Preservation, was released at the beginning of 2009, and since then he wrote another 15 books as a single author, and two co-authored with Geoffrey Knight, with whom Ethan also launched Wilde City Press, an indie publisher specializing in Gay Literature, which closed back in 2017.

When I asked him what he wanted to achieve with his books, Ethan replied “Great characterization, romance, and to emotionally move the reader–whether it be with a few laughs or a few tears. Getting down to the very basic thing I want more than anything else, which is to entertain the reader. I always cross my fingers, hoping that reading one of my books is like going out on a really great date. And with any luck, have the reader ready to turn around and go out with me again.”

In 2010, Ethan joined the jury of the Rainbow Awards, which I founded the year before, and he was part of it until 2016; he just skipped the 2017 cycle, but he had already told me he wanted to join again. Being a judge allowed him to test his reading habits; for example, he read his first historical romance, Lovers Knot by Donald Hardy: “My first historical and surprisingly great with mystery and paranormal aspects to it. Thanks for this–who knows how long I would have gone without reading a historical if it weren’t for your contest!”

Another one of his unique traits was that that he had the habit of falling in love with a fantasy romance novel that was not initially his cup of tea, like Miles and the Magic Flute by Heidi Cullinan: “I really got sucked into this one, and was hooked up until the end, which lost a little bit of the luster for me. It was a little too happy of a happy ending, if that makes any sense? But overall what an awesome book!” And, as if to confirm his words, when the book was on the market, Ethan Day grabbed it and republished the book with his Wilde City Press.

The sadness that is in my heart is mirrored in so many others.  I’m sure our LGBTQ+ community will not be the same without Ethan. We will cope, but we will always feel the loss. His sister Linda shared with me these words:

He was so extraordinary. He had a sharp wit and would give the shirt off his back if needed. He had such a kind heart & soul. He had an infectious laugh and brightened any room he entered. He was not just my brother, he was my best friend. He was the most amazing person I have ever known. I love him beyond the moon and back. I can’t even fathom this world without him in it.

A Bisexual Boxer Biopic, Transgender Sci-Fi, and Other LGBT News
Announcing the Expansion of LGBTQ Writers in Schools
‘Sister Spit: Writing, Rants and Reminiscence from the Road’ Hits Bookstores this September