‘We Go Seasonal’ by Robert Siek

‘We Go Seasonal’ by Robert Siek 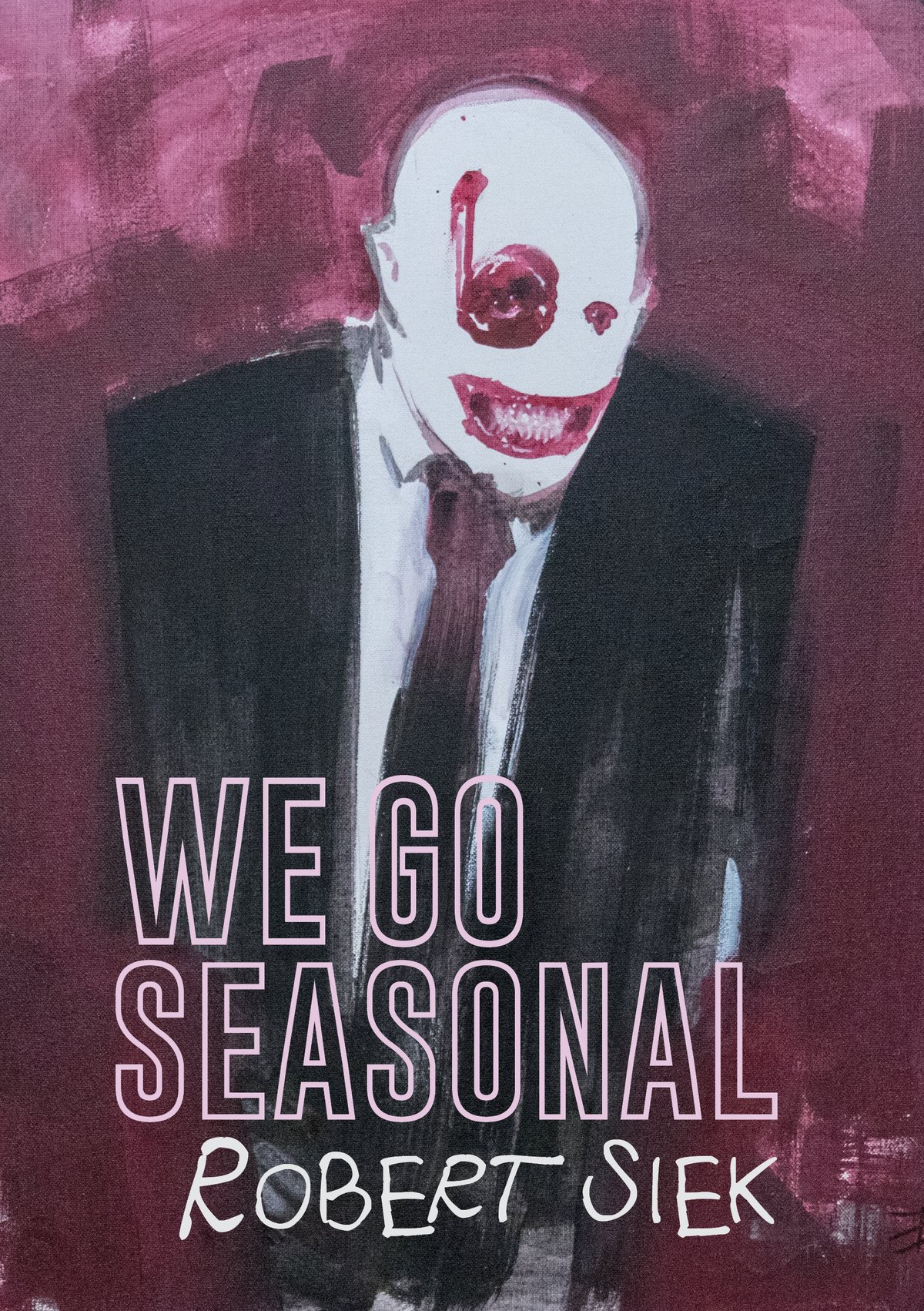 At first glance I heard in Siek a throwback to the 1980s East Village scene, a troubled son of New Jersey’s suburbia fleeing the “bridge and tunnel” life to become a “Second Avenue artist-rebel.” One who sees the world through an abject lens and purges, on paper, his angry wounds from a toxic youth. This was very cynical of me, I know, and dismissive of a whole vital era in queer culture.

Upon closer reading, I could not easily discount the anxious, freakish, hallucinatory quality Siek brings to the everyday; as well as his keen intelligence. I realized his voice was more genuine and original than I first thought, his tone more than mere displays of ersatz rebelliousness and sardonicism.

Siek draws heavily from pop culture, is well versed in his film knowledge, knows about designer names, and unpacks the drugs, sex, and rock-and-roll ethos with a sense of seriousness. He embodies, intentionally or unintentionally, many queer influences past and present. By virtue of his singular voice and vision, he succinctly captures the Zeitgeist of the Trump years. This is not the Reagan-era nihilism of a Bret Easton Ellis and his Brat Pack friends, or the cri de coeur of the AIDS decades and its searing verse infused with melancholy; but rather something disturbingly new, anxious, informed, and dissonant. His writing is rich in meaning and significance; it is also masterful and well written.

There are tinges of Gus Van Sant and Patti Smith, and echoes of Frank O’Hara as well as a whole slew of recent queer poets including Michael Montlack. There are reminders of Mapplethorpe and Peter Hujar. There is the downbeat urban grit of Ginsberg, the queer city grunge of Eileen Myles, the rebelliousness and delinquency of Dennis Cooper, and so on and so forth. The poems draw from the jump-cut visuals of  “slasher” movies; flaunt the shameless trend of product placement and branding; have much in common with Sophia Copland’s The Bling Ring; and capture the darker cinematic tales of indie films from Heathers to Beach Rats.

He explores a fragmented sound-bite world with its instant YouTube and Facebook video postings. His poems stream with the crawl of information. They favor colorless vlogs of the everyday, shot out the windows of elevated subway cars or New Jersey commuter trains, texted into smart phones while zoning out on headphones. They record the momentary, the brief, the discordant, and the social and economic disparities that haunt the urban everyday.

In a blurb for the book, Lynn Crosbie calls Siek’s work “like and uniquely unlike” Frank O’Hara in his focus on the “enormity of the everyday.” And indeed there is a quality of O’Hara’s “I do this I do that” poems, his bent for high-low culture and the city scene. But if O’Hara reveled in a charmed metropolis of galleries, Hampton’s parties, artist soirees, and Fire Island summers, Siek sees a starker and more unsettled world.

Siek gives us the peripatetic city musings of O’Hara, only his are existential blog entries, commentaries narrated on YouTube, trending missives from an East Williamsburg or Bushwick outlier.

One standout poem in the collection,“Gay Vikings in Love,” is a youthful anthem, a declaration of love, that is subverted by Siek’s play with gender roles and stereotypes. Using the language of mainstream pop song lyrics, Siek parodies the culturally sanctioned ritual of an NFL football game while upending the ideals behind pop-fandom.

He opens the poem with: “Awesome, Babe, you and me against the world . . .” And later writes:

entirely us in the physical, battle axes raised,
Viking helmets worn tilted, monsters on the horizon
a football field away, drunk frat boys at a toga party
or shirtless and painted at a stadium in Minnesota.
That song you play at shows, the one titled “Baby,”
with guitar unlacing the front of me, like opening
a corset . . .

The great irony here is that his poem seems to be declaring a love for the pop star, Justin Bieber, and joining the ranks of other infatuated “Beliebers.” Bieber, of course, is the YouTube sensation that at the age of 12 topped the charts and drew the devotion of adolescents, mostly girls, everywhere. Appropriating the lyrics of Bieber’s hit song, “Baby,” Siek turns the tables on our expectations, focuses gay male desire on Bieber and that of the frenzied crowd of male football fans. He portrays them as drunken boys acting out in testosterone-fueled fury. These shirtless “frat boys at a toga party” are wearing mock Viking helmets and painted in the team colors of the Minnesota Vikings. Siek toys with Bieber’s song, suggesting Bieber has bodice-ripping powers: “unlacing the front of me, like opening/ a corset . . .”

The poet further reverses and queers “traditional” gender roles with the following lines:

fan girl front and center, closest to the stage.
Me and you against the world, lovebirds on rocket fuel,
two bullets through a thousand hearts, blood trails drag
from sidewalk traffic, animated birds carrying a banner
beaks clasped at corners; “Always be mine,”
printed in red cursive letters.

Here Siek employs all of the treacle of Bieber’s lyrics with its clichéd heartache to create a strange mash-up of sweetness and toxic masculinity: e.g. the image of “lovebirds” is oddly associated with the harsher more fiery notion of “rocket fuel”; and the cartoonish sweetness of Disneyesque birds carrying a greeting-card Valentine banner “Always be mine” is preceded by “bullets” piercing hearts, and “blood trails” on sidewalks.

Siek breaks the boy-girl pop love imagery by extending the conceit of boy-fans bleeding from bloody “bullet” wounds, a far cry from Cupid’s arrows and closer to the daily narratives of gun violence. He continues the metaphor in his next line: “And here I am:/ stitched up, conscious on a surgeon’s table, /the end of the song, the stairs to the J train.”

Siek not so subtly parodies and contrasts the images of fans swooning, contenting themselves with a selfie, or claiming the Bieber for their very own, with Bieber’s chosen wife driven off in a limo to a fantasy home, while Siek’s broken hearted narrator is “stitched up.” The narrator emerges conscious from the spellbound magic of hearing Bieber and must make the trek back alone on a subway. Thus sentimentality is neutralized and the traditional signifiers of teen idol worship and romance are reinterpreted through masculine culture.

Siek ends the poem with:

My battle axe is raised, Babe. I’m prepared
to swing it, because we’re together,
thousands of drunks loud in a stadium,
a pin through my heart, our love
loud and furious.

This cheeky sexual innuendo of the poem’s raised “battle axe,” the suggestion of virile allegiance, a love so compelling that it could incite violence, is linked with the intoxication of the male fans who roar loudly and furiously. “A pin through my heart” continues the metaphor found earlier in the poem when the poet declares: “I’m a Voodoo doll, claimed and spellbound…” Siek’s choice of this image seems to run counter again with the soft feminine tropes of love-struck, sweet-tempered, Barbie dolls, girls dolled up to entice their idol.

Through a spectacularly queer prism, Siek is a poet that embodies this uncanny American moment, as well as the new bohemian fervor that’s been brewing in New York City’s Bushwick and Astoria neighborhoods. His work is richly rewarding, his poetry a promise of great things to come.

'Damn Love' by Jasmine Beach-Ferrara
'Freeing Ourselves: A Guide to Health and Self Love for Brown Bois' by The Brown Boi Project
'Gender Outlaws: The Next Generation' ed by Kate Bornstein and S. Bear Bergman