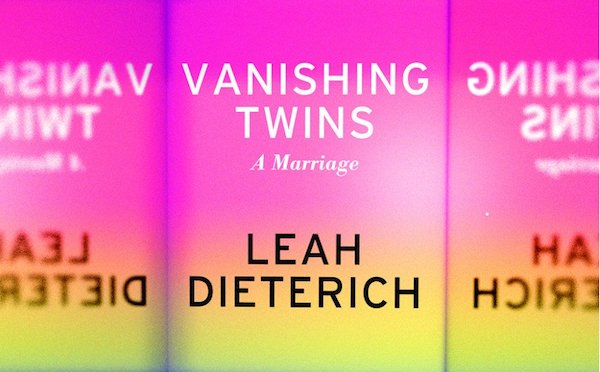 That’s the salvo that ignites the central drama of Leah Dieterich’s new memoir, Vanishing Twins: A Marriage. At the time, she thinks of herself as “straight but interested in women,” having spent her college years making out with girls at frat parties on the pretext of male titillation. As a young wife, she’s still inclined to link her queer desire to a man: “I could still be just like him—a straight person who wanted to sleep with women,” she thinks. “It let me become more me without becoming less him.”

Make no mistake: Dieterich hears your yikes and raises it. This is a book about the pursuit of coupledom past the point where the culturally acceptable search for a soulmate leaves off. Starting with a childhood spent staring into the ballet studio mirror, Leah keeps watch for the twin she believes she ought to have had. Her vigilance roves through realms interpersonal, artistic, and even medical. Vanishing Twin Syndrome is the relatively common phenomenon of a twin pregnancy collapsing into one, and Dieterich reports from her reading that “if the less viable twin is not consumed, it ‘exists in a kind of limbo, compressed by the other to a flattened, parchment-like state known as faetus papyraceus.’”

There is something uncanny about twinship, of course; creators throughout the ages have mined it for camp or horror. An obsession with finding or transforming oneself into a twin is routinely painted as narcissistic, incestuous even. Dieterich plays with all these connotations in due time. “The idea of lovemaking in the womb got me hot,” she says at one point, and whether that line makes you guffaw or gag may indicate how much patience you’re likely to have with Vanishing Twins.

By that late passage, Dieterich has revealed that she’s a bit slyer than she comes across in the first act. No amount of mirror-gazing will produce self knowledge on its own, and adolescent Leah does not dig deep. She gets into journalism because majoring in nutrition requires chemistry, then switches to advertising because interviewing sources is too hard. Of a new friend/crush, she chirps, “I always liked girls with thick hair; I felt I had more in common with them than girls with thin hair.” When she meets her future husband, Eric, she marvels at a series of less-than-astounding coincidences: they’re both left-handed, both the products of long marriages, and both interested in art and being very thin. Still, those points of connection are enough to spark a passionate marriage.

Dieterich outlines the fraught dynamics of a newly open relationship with merciless precision. “I didn’t want to give him ground rules because I worried that if something was off limits for him, it would be off limits for me too,” she recalls. Leah gets what Eric indignantly calls a “lesbian haircut” and becomes enmeshed in a long-distance relationship with a Spanish filmmaker, trading emails about their periods and photos of the moon. Eric, meanwhile, discovers dancing, Marx, and other willing women. During their instant messenger dates, Leah tries to hide her alarm:

I punctuated my responses with exclamations. Whoa! Oh wow! Haha! I wanted to be supportive in the way he had been with me. I wanted to look excited. And I was, at an atomic level. It felt like everything inside me was dividing and dividing. Like it was all going to come apart.

In such disintegration lies room for redefinition, and Dieterich describes that messy process with a level of intimacy that often amounts to bravery. The marriage at the heart of Vanishing Twins may snap back into its original shape eventually, but from the inside it feels bigger than before.

The Creative Brilliance of Louise Fitzhugh: On Sometimes You Have to Lie by Leslie Brody
'Relative Stranger' by Barbara Treat Williams
'The Gods of Tango' by Carolina De Robertis