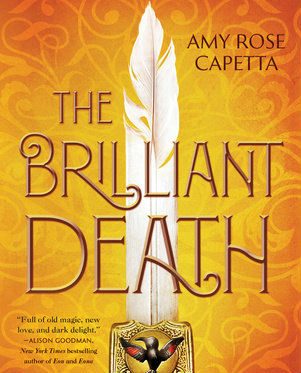 The Brilliant Death is a fast-paced joyride of a novel, containing magic, intrigue, and a genderfluid love story in the midst of high-stakes secrets and courtly lies. Teodora di Sangro is her family’s protector: a strega whose identity is hidden even to those she loves most. As a strega, she contains the power of transfiguration, which she uses to punish her powerful family’s enemies, of which there are many. Thieves who seek to steal from them, or disgruntled townspeople who would wish her family harm; it is up to Teo to deal with them, to dole out punishment, and keep her family safe. It’s a job that keeps Teo isolated: she’s seen as odd, as compared to her older sister Mirella, who is the picture of feminine beauty and grace. She doesn’t fit in with her brothers, either; the violent and unstable Beniamo, or the studious, soft-hearted Luca, the scholar. Yet Teo shoulders her duty stoically, never dreaming that there might be more in store for her than the limited position that second daughter outlines.

When an attack is made on her family – and all the patriarchs that make up the ruling families of her land, Vinalia – however, the world that Teo knew is thrown into chaos. Suddenly Teo must embark on a quest to uncover the motives behind such an attack, all while her father’s life, and the fate of her family, hangs in the balance. The scope of such an attack is more far reaching than she’d ever anticipated, and soon the lives of all streghe hang in the balance. But Teo’s magic is stubborn, and she needs a guide to help her use it if she has any hope of success.

Enter Cielo, a fellow strega whose gender expression surpasses masculinity and femininity to encompass both, and more. Cielo is man, woman, bird, mouse, raincloud, wind. Celio is an orphan, searching for the truth of their own origin story, a truth that is bound up in Teo’s quest. While one might momentarily wonder why Cielo’s (and, later, Teo’s) gender is so firmly bound to their physical form (there is an unsettling insistence on which presentation is a “boy’s” body and which is a “girl’s” body), overall, Capetta emphasizes that who we are is made up of far more than what parts we have or how we are perceived by an uncaring and ignorant world. Cielo, like the sky they named themselves after, “is always changing, but [is] always the sky,” Teo observes. Ultimately, it is Cielo’s fluidity – and, more importantly, Cielo’s constant and joyful embodiment of that fluidity – that helps Teo understand herself and stand firm in her own identity and power. With Cielo by her side, and the lessons Cielo teaches her – about magic, about love – Teo finds the strength to fully inhabit her so-called oddness and use it as her strength. As Teo becomes more at ease with her stubborn magic, she finds what she needs within herself to save her family. More importantly, she finds the confidence to question the sense of duty that has guided her, but has also served as a limitation on who Teo truly is.

The Brilliant Death is a fascinating story, full of nobles and peasants; kitchen witches who bake memories into their bread; and magical young girls’ who breath is vengeful poison. Readers will follow Teo as she goes from stoic and isolated second daughter, bound by her obligations to her family, to a powerful strega in her own right, self-assured and powerful, steadfast and unafraid to use her magic to guide herself home to her own authentic sense of self.