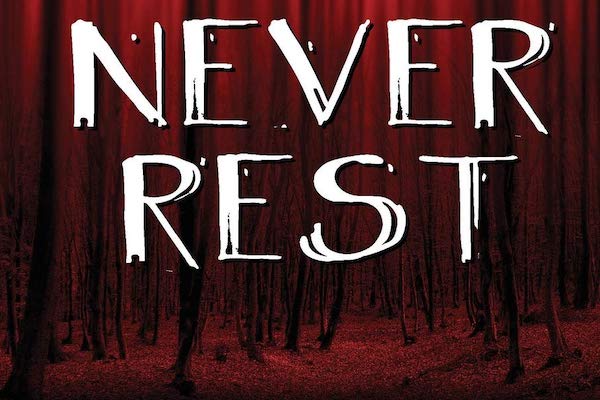 Read This! A Contemporary Queer Twist on ‘Frankenstein’ by Marshall Thornton

Read This! A Contemporary Queer Twist on ‘Frankenstein’ by Marshall Thornton 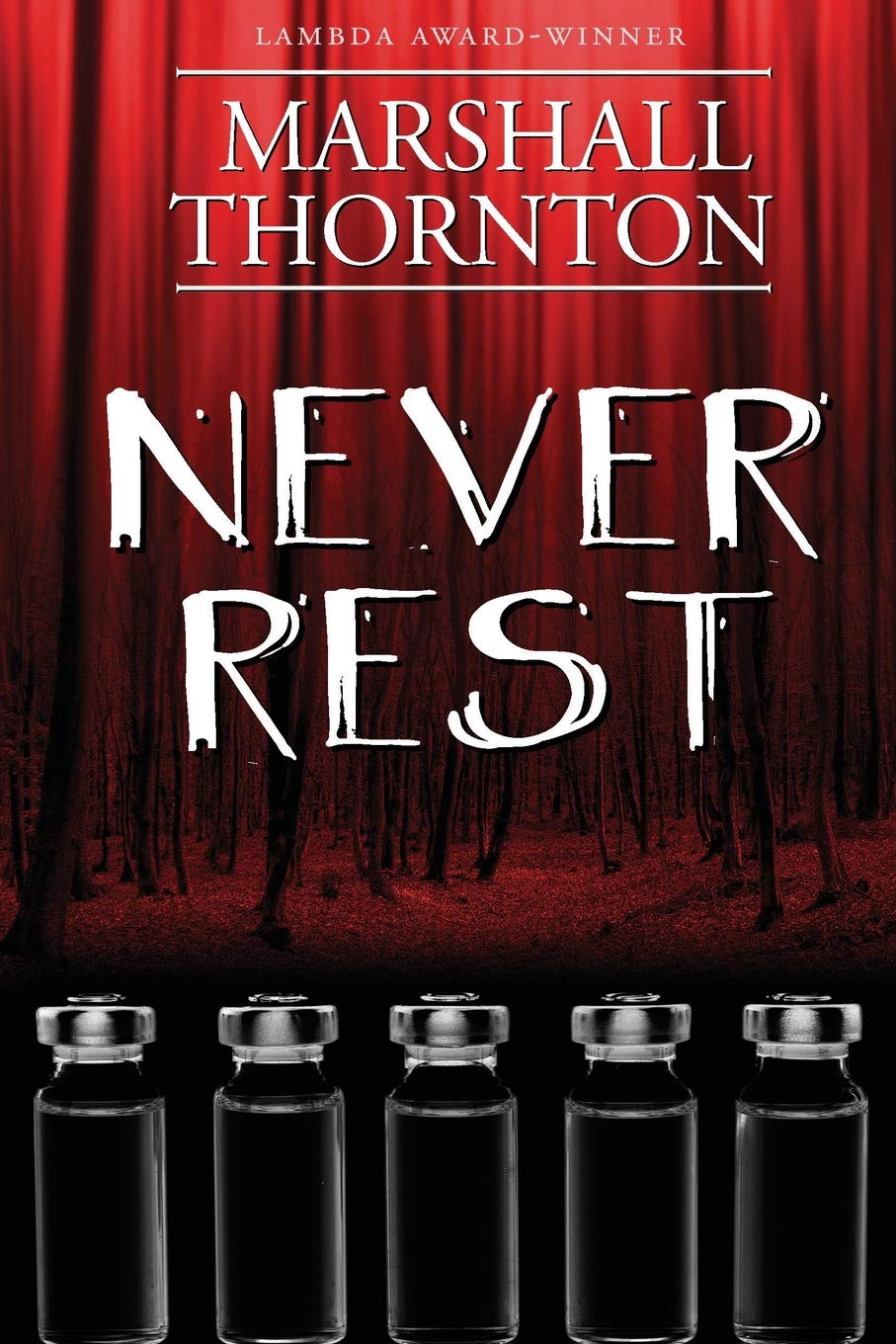 Looking for something a little spooky to read as we get closer to Halloween? Consider picking up a copy of Lambda Literary Award-winner Marshall Thornton’s new young adult novel, Never Rest (Lethe Press, October 2018), “a contemporary queer twist on the Frankenstein monster story.”

To celebrate the season, we are sharing an excerpt from the novel. Here’s a little more about the story, from the publisher:

Nineteen-year-old Jake Margate has had terminal leukemia for five years and is ready to let go but his mother has other ideas. She’s found a rogue doctor pursuing radical treatments and takes her son to a remote institute where he does seem to get better…at first. But then the treatment begins to fail in strange ways just as Jake begins to fall for another of the test subjects. Slowly, he realizes he’s been turned into something truly horrible.

We hurried back to the main building. Goth huffing, his arm around me. I kept checking my wrists for a pulse and not finding one. I felt sluggish, as though I was moving in slow motion. My feet and ankles felt tighter and heavier with each step.

Goth kept giving me sidelong glances. I probably should have just said I didn’t feel well and left it at that. My heart hadn’t stopped. I was still standing, still walking, so it couldn’t have. Why had I said something that stupid?

When we got to the nurse’s desk, I said the more rational, “I’m not feeling so good.”

“He said his heart stopped.”

“Obviously, his heart hasn’t stopped.” She tried not to break into a smile when she said that. She looked closely at me, expecting a practical joke or a hypochondriac, instead seeing someone very sick. “You don’t look too good, though.”

“They’re not always easy to find.” She reached out a hand to take my wrist. Moving her fingers around, she searched for my pulse. She didn’t find it. Kept trying. Still couldn’t find it.

Goth and I went into the examining room. It looked pretty much as it had the last time I was there: neat, orderly, sterile. It was the kind of room where you should feel safe but usually felt anything but. Like a good patient, I got up on the examining table.

“I think I died the first night I was here.”

“No, um, I…” I was tongue-tied for a moment. He called me bae. That was so…sexy. “Um, I mean, I died for a minute or two. I had this kind of vision of myself on the ceiling watching everything as it happened. And then I sort of jumped back into my body.”

“So that’s why you think your heart stopped? Because it has before?”

I nodded. He got a concerned look on his face then looked away for a moment and when he did he said, “Oh, man, your ankles.”

I lifted them up in front of me so I could see them, pulling up my pajama bottoms at this same time; this pair was a deep blue plaid. I’d been wearing an old pair of corduroy slippers most of the time I’d been sick. My ankles and feet had turned an angry eggplant purple. That wasn’t right.

My first thought was “lividity.” In addition to America’s Next Top Model and Project Runway, my mom and I watched all the forensic shows and I now knew exactly what lividity was. It was blood pooling in a corpse after the heart has stopped. Obviously, that couldn’t be what was happening to me, though it definitely looked that way.

Just then, Dr. Harry flew into the room, Nurse Margie trailing behind him. Using his stethoscope, he checked the pulse in my neck, my chest, my wrists. Without looking up, he said, “Goliath, you need to leave.”

He obviously didn’t want to go, but he had no choice. “I’ll be right outside.”

“I had trouble finding his pulse,” Nurse Margie said. “I’m sure it’s there, it’s just difficult to find.”

Dr. Harry pushed me down on the table, opened my pajama top, and slipped in the stethoscope.

“What’s happening to me?”

“Be quiet. I need to listen to your heart.”

I did as I was told. He stepped back and studied me seriously. “Remem­ber to breathe.”

“Not often enough. Nurse, would you get out the defibrillator?”

Fear and confusion filled her face. “But—” 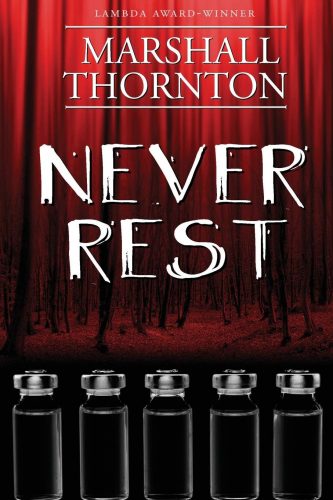 Nurse Margie hurried to get the defibrillator out of the cabinet. She rested it on the counter and stared at it a moment. “Doctor, you can’t use this on him. He’s not in cardiac arrest. Look at him—”

Dr. Harry pushed her out of the way, plugged the paddles into the machine and turned it on.

Cowed by the volume of his voice, Nurse Margie ran out of the office. Dr. Harry set the machine and then grabbed the paddles and pressed them onto my chest.

Dr. Harry hit a button on the paddle, and I was walloped with a bolt of electricity that felt like I’d been tackled by a three hundred pound line­backer—if that’s actually what linebackers do, I really don’t know.

Anyway, I felt like I was in a kind of shock. It hurt even after it was over, but my heart was pounding against my rib cage like it wanted to get out. I took deep, ragged breaths because they felt good, deliciously good. The unpleasant burning smell in the air may have been coming from my chest. I looked down and saw two angry red spots where I’d been shocked.

“My heart stopped. Why? And why am I conscious?”

“Your heart didn’t stop. It slowed. Your pulse was barely perceptible, but it was there. You just needed a little shock to bring you back up to speed.”

He was lying. Nurse Margie said you couldn’t use that machine on someone who wasn’t in cardiac arrest, and I had the feeling she was right. Except she couldn’t be right. If my heart had really stopped, I’d have passed out. I’d have been unconscious. And that didn’t happen.

“What about my ankles?”

“Ankles?” he asked even as he moved down to them and pulled back the hems of my pajama legs. He was quiet.

“Lividity happens in corpses. You’re not a corpse. When your heart slowed, blood collected in your feet. I assume you were standing when the episode began?” He began rubbing my ankles, helping the blood work its way back into circulation.

I didn’t believe him. He was telling me parts of the truth but not all of it. So what was the truth? I was cold all the time. My body temperature ran much lower than it should. I didn’t have an appetite. I felt stiff. Sometimes I forgot to breathe. I smelled bad. My heart stopped, and I didn’t pass out. Blood pooled in my body. I attracted flies. An idea was beginning to form. One that made me feel numb. Number than normal.

“For a few minutes, yes. But I revived you.” He was still rubbing my ankles. It felt good.

“What’s in it? What’s in Property Five?”

He stiffened. “That’s proprietary information. I can’t share that with you.”

“It doesn’t cure leukemia, does it?”

“Why? Why do I need to remember to breathe?”

I exhaled as much air from my lungs as I could. Then I didn’t inhale. I felt like little kid having a temper tantrum, holding my breath. Except, when I was a child and held my breath, I’d had the almost instant urge to breathe, a tugging, aching for air. The more I denied myself breath, the stronger the urge to breathe became until it bordered on panic, and I’d gasp in the sweet relief of oxygen.

But I didn’t feel any of that. I was almost calm. Staring at Dr. Harry. Listening to the quiet of the room. An old-fashioned clock ticked on the wall. I didn’t breathe.

I took a scoop of air. “I don’t know what we’ve done. You need to tell me.” I pushed even more air out of my lungs and then didn’t inhale.

He grabbed me by the shoulders and began to shake me saying “Breathe. Breathe, damn you.” I realized this was the first time I’d ever seen him emotional other than in my visions. “Breathe!” he demanded one more time. And then let me go. His shoul­ders slumped. He stared at me, angry and raw. He didn’t want to tell me what was happening to me. But he was also beginning to understand I wasn’t going to cooperate unless I knew. We were playing a kind of medical chicken. Nervously, I wondered if I really wanted to win.

Then he began to speak. “You need to breathe because your cells won’t function if you don’t. And if they don’t function they could begin to decompose, will decompose. That’s what we’ve been doing since the night you got here. Fighting decomposition.”

He hesitated, then began slowly, “In a traditional sense, perhaps. Death is the cessation of vital function. Heartbeat, breathing, brain activity. As you know we’re having trouble keeping your heart beating and your breathing is somewhat—optional. Your only reliable indication of life is brain activity. Consciousness.”

“I’ll try to describe it as simply as I can. I believe I talked to you about microtubules when you first got here. Microtubules are the part of a cell that anesthesia acts upon to cause unconsciousness. They’re also acted upon by so-called mind-expanding drugs like LSD.” He paused, seeming to decide where to go next. “I began by researching AIDS. I lost someone close to me while I was in medical school. Many. I lost many people close to me. Friends, lovers. It was horrible.”

“One of them was named Godwin?”

I didn’t know what to say to that. Just knowing his lover’s name seemed weirdly intimate. He continued, “There are many connections between HIV and cancer. The drugs used to treat both interfere with cellular pro­cesses. I suppose it’s not surprising I eventually became interested in cancer research. Cancer drugs disrupt cellular function by attacking different parts of a cell. Some of them attack microtubules. I became attracted to that class of drugs, and eventually what I discovered evolved into Property Five.”

“You destroyed part of my cells?”

“Quite the opposite. One of the drugs I was working with when I was researching cancer failed, but it failed in an interesting way. It fixed microtubules so that they’re permanent. That part of each cell in your body appears to be indestructible. The rest of the cell, however, is subject to decomposition unless we find a way keep your organ systems functioning.”

I tried to take it all in. It was hard to grasp. “So you’re trying to cure AIDS? Or cancer?”

My mouth fell open. Was he serious? I mean, it wasn’t possible. You couldn’t do something like that. No one lived forever. No one should live forever [….]

To read the rest of the story, purchase Never Rest here.