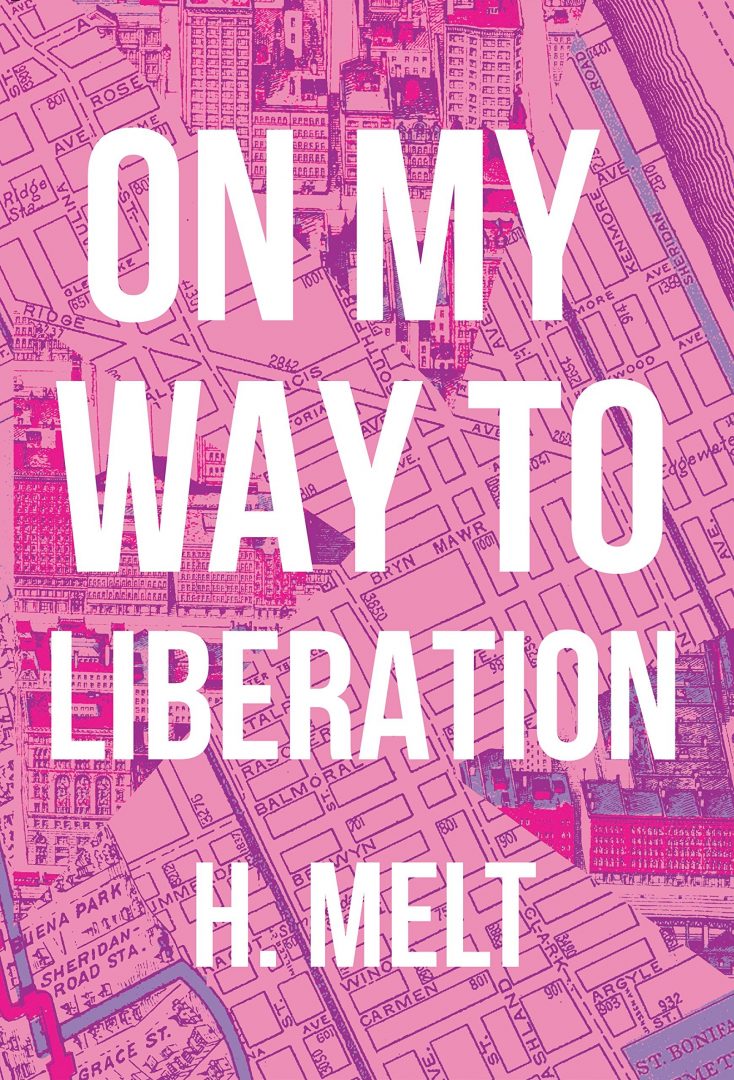 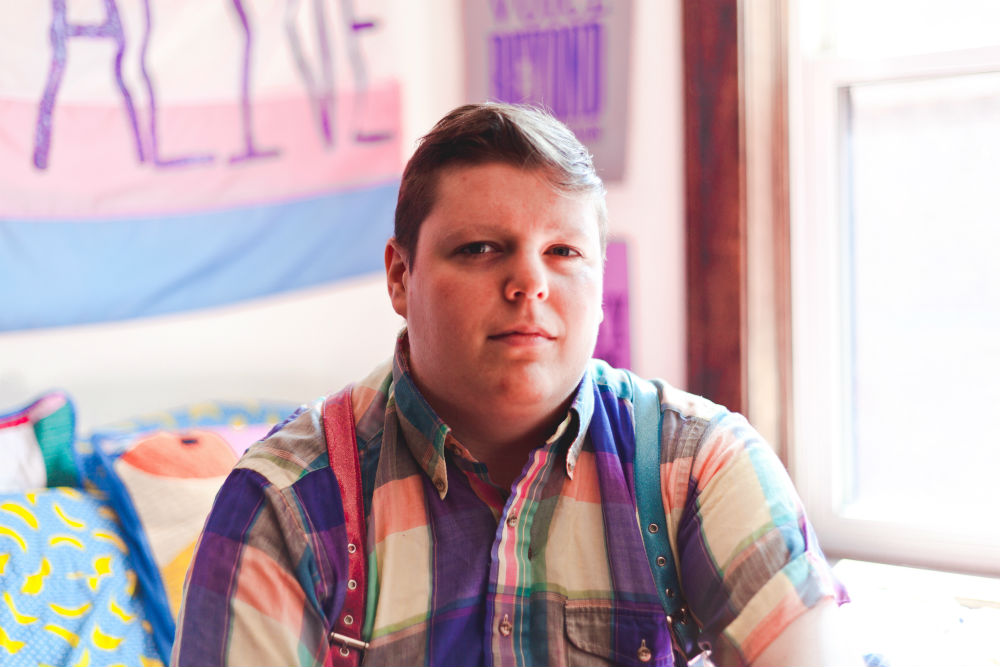 H. Melt’s new chapbook On My Way to Liberation (Haymarket Books) demonstrates the ways in which trans recognition and kinship can and cannot be found in various spaces: the bus stop, the reading, the farmers market, the family Thanksgiving table. If not there, then where? A clarion call for visibility, the book guides us towards a future where all trans identities are celebrated authentically, in all their expanding forms.

Melt is a poet, artist, and educator whose work proudly celebrates Chicago’s queer and trans communities. Their writing has appeared many places including the Chicago Reader, The Offing, and Them, the first trans literary journal in the United States. They are the author of The Plural, The Blurring, and editor of Subject to Change: Trans Poetry & Conversation.

It was my pleasure to learn more about their thoughts on the new project via this conversation over email:

First off, how are you? What’ve you been thinking about lately?

Lately, I’ve been thinking a lot about archives. I’m currently an artist in residence at the Newberry Library’s Chicago Protest Collection, with the support of Sixty Inches from Center and the Donnelley Foundation. I’m studying the history of protest in Chicago, particularly signs, pamphlets, and banners people have made. It’s been heartbreaking how few queer and trans materials are in collections at the Newberry. I would love to start a trans archive.

That sounds really interesting, and like such a cool residency. Do you think your background in printmaking influences your poetry?

I actually don’t have a background in printmaking! At least a traditional one. But I’m flattered you would think that. All the prints that I’ve made have been in collaboration with other printmakers. One of the first prints I made was my “NO HETERO” poster at Spudnik Press, where I was teaching with the former queer arts collective 3rd Language. I first collaborated with the cover artist for On My Way to Liberation (River Kerstetter) when they asked to make a broadside for my poem “Someone Else Entirely.” It was beautiful, and captured the meaning of the poem. We later made a “THERE ARE TRANS PEOPLE HERE” poster together, which is a line from one of my poems in the new chapbook. Making that poster and seeing the demand for it has made me realize that’s one of the central themes of my work. I’ve been exploring that idea, and writing about all the different places where trans people exist.

That collaborative process sounds so valuable, and feels really in line with a queer artistic approach. And some of these prints make an appearance in “To All Those Listening,” where they are labeled “not suitable for viewing” by a property manager who I assume is showing the apartment to new tenants. It makes me think of how “concern” for children is often used as a weapon against establishing queer and trans spaces, without considering how valuable it might be for children to see those messages.

Collaboration is very queer, especially in this country where individualism is praised as success. Working with people who share my values is really important to me. It’s impossible to do anything alone. One of the reasons I wrote “To All Those Listening” is because I wanted to let people know it is okay to ask for help.

It was so disturbing how transphobia entered my own home through discrimination by my former landlord. They never actually showed my apartment to anyone—the letter excerpted in that poem was a form of intimidation. I ended up filing a claim against them and won a settlement. As part of that settlement, they had to go through training, change their paperwork, donate to a local trans organization, and cover my mental health expenses. In that situation, justice to me meant reducing their potential to harm more trans people in the future.

People are identifying as queer and trans earlier in their lives. That scares straight people. Even though I wasn’t aware of the word “trans” when I was a kid, I definitely feel like I had a trans childhood. There were so many moments growing up where I challenged traditional gender roles. Did you have any moments of queerness growing up? When did you first come to the word queer or begin to understand queerness?

“You’re so collaborative you’re turning the interview on its head! My experience with queerness as a kid was complicated. I was always pretty effeminate, and so I had a lot of people either ask if I was gay or imply it through teasing, which I used to deny. Once I was exposed to folks who positively identified as queer in high school a lot started connecting and I started to embrace queerness.”.

I feel like I’ve always been trans. I’ve always been gender nonconforming. It wasn’t until I moved away from my family that I was able to express that more freely. My expectations for queer communities are so much higher than for the straight or cis world. One thread in the book is the pain of people in your own communities not understanding you. I’ve found that gay and lesbian spaces have sometimes been unwelcoming to me, or that they don’t have much trans awareness. This goes for feminist spaces too, like my job at the bookstore, where I have to deal with transphobic customers.

One thing that I love about poetry is that it’s brought so many amazing people into my life, who don’t necessarily share my identities but embrace me nonetheless. I’ve learned so much from the poets in my life. Poetry is one of the places I feel most welcome.

Speaking on the welcome you find in poetry-you’ve also written essays, some of which appeared in The Plural, The Blurring. Is there something specifically welcoming to you about poetry, or do you think it’s a matter of time before you try your hand at other genres? I’m curious if you’ve considered fiction or playwriting.

I’ve worked in a lot of different artistic mediums but my writing has mostly stuck to the realms of poetry and nonfiction. My work is so realist and autobiographical, it’s hard for me to think about writing fiction. However, I’m moving away from writing strictly about my own life and I am incorporating elements of queer and trans futurism into my work. I’m not writing science fiction, but I’ve been imagining trans liberation in my poems. After years of writing about trauma, I’m excited to open up my practice and imagine a more trans inclusive world through my writing.

That’s interesting that you have queer and trans futurism on your radar, because this chapbook closes almost with a historical lens as you explain in the title poem “On My Way to Liberation” that your grandfather survived the Holocaust by dressing as a girl “to stay close/to his mother and sisters.” It seems like a fitting transition to look to the past before you look to the future-which again, seems very within a queer and trans tradition to me, to acknowledge the roots and history we have before we look forward.

Wow, I’m very honored by your close reading of this chapbook and that insight. There’s this notion that queer and trans history doesn’t extend that far back, that these are contemporary constructions, and that’s not true. Challenging gender and sexual norms is not new, it’s present throughout history. Those are just the terms we’re using in the present day. My family is incredibly straight and cis, yet I’ve found this piece of trans history within my own family history. My grandfather is not trans, but his act of gender transgression kept him close to his family for a little bit longer. That’s allowed me to feel closer to my own family and to see myself in the future.

Liberation is a constant journey. We’re always on the way but there are certainly times when it’s easy to feel lost, get caught up in oppression, discrimination, and violence. It’s hard to find examples of trans history and trans futures. I want to remind people that trans history exists and that trans futures are possible. Survival is difficult enough. I’m imagining a future where trans people can easily find employment, access healthcare and secure stable housing, where prisons and police don’t exist, where deportations and familial rejection don’t occur, where trans stories are part of everyone’s education. In the future, I hope trans people can experience more joy in their everyday lives.

Personal Advice from Lucy Jane Bledsoe: Help! How do You Tell Someone They are Bad in Bed?
'The Handmaid's Tale,' the Publishing Triangle Awards, and More LGBT News
'What’s Your Sign, Girl? Cartoonists Talk About Their Sun Signs' Edited by Robert Kirby

Levi Todd is a queer poet and lifelong Chicagoan. He serves as Assistant Poetry Editor for Tinderbox Poetry Journal and Vinyl Poetry & Prose. Levi’s work is published or forthcoming in Pinwheel, Cotton Xenomorph, Glass: A Journal of Poetry, and elsewhere. He tweets at @levicitodd, where he’d love to hear your favorite Carly Rae Jepsen song.