‘The Covert Captain: Or, A Marriage of Equals’ by Jeannelle M. Ferreira

‘The Covert Captain: Or, A Marriage of Equals’ by Jeannelle M. Ferreira 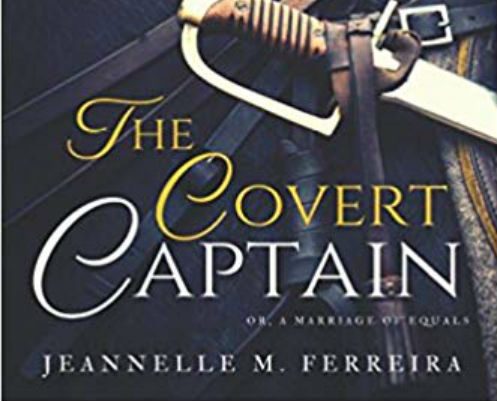 The war with France has long been over, except in Captain Nathaniel Fleming’s dreams. Sleep regularly brings him back into battle as a cavalryman at Waterloo, and sometimes he’s even triggered during the day. In those moments, he’s no longer at a country house in England, but instead living in the past.

Nathaniel is staying with Sherbourne, his closest friend and a Major from the Seventh. When Nathaniel is introduced to Sherry’s spinster sister, Lady Harriet, he finds himself drawn to the clever woman, even as he tries to avoid her to keep his secret from being discovered: no one at the house knows that Nathaniel is actually Eleanor Fleming.

When Harriet’s annoying cousin arrives, she begs Fleming to be her ally, and despite Eleanor’s best efforts, she can’t seem to stay away. And despite the difference in their social standing, they make quite the love match. Can their relationship last once Harriet learns who Nathaniel really is?

With The Covert Captain, Ferreira delivers an intricate, gorgeously written lesbian Regency romance. From the first page, we’re let in on Eleanor’s secret, following along as she lives her life almost 24/7 as Nathaniel. The story opens as she wakes from a nightmare, only to be introduced to Harriet:

“Fleming, may I present my sister, the Lady Harriet.”

Fleming bowed low and kissed the proffered hand, rising to find the other woman’s expression had gone opaque. She knows. I’m caught out. She must know. Nonsense. Jesus.

“And Harriet, this is Captain Nathaniel Fleming, with me in the Seventh since…since a damn long time ago, anyway.”

This first scene works well because it immediately establishes that the people closest to her truly believe Eleanor to be Nathaniel, while it also simultaneously making it clear that she must always be on guard against someone learning her secret and taking away the life that she’s forged for herself. And Eleanor is right to be concerned: as a woman without connections to fall back on and more than a decade of experience passing as a man, she would truly lose everything. She also already has more than enough to deal with, given the daydreams and nightmares she’s grappling with—what we would likely call PTSD today.

The story shifts perspectives between Eleanor and Harriet, so that we also see the restrictions Harriet experiences as a spinster who’s much closer to thirty than she is to twenty. She’s brilliant and headstrong, and it’s no wonder that Eleanor is drawn to her energy. As a (seemingly) heterosexual couple, they must ensure that their interactions are always entirely proper. This makes for an especially interesting dynamic between them, because if Harriet had known from the get-go that Fleming is a woman, they could have spent much more time together without anyone batting an eye.

The world-building and research that went into The Covert Captain is incredible, so much so that it feels like a book that could have been written a couple of hundred years ago. And unlike many mainstream Regency romances, it doesn’t add context or stop to explain what certain words mean. This adds to that sense of authenticity, even if it means that those who don’t know or can’t remember offhand what a “dolman” or a “cavesson” is need to look a few things up.

That’s not to say that the writing feels stodgy, however, because the characters are so real that they bring everything to life, like when Sherry tells Fleming that there’s a package waiting for him at the door:

It was not the captain’s question but the cast of her brother’s grin that stirred Harriet. “Captain, do go carefully. Sherry, if you’ve buttered the staircase again—!”

“Sister, I was twelve,” Sherbourne protested.

This book is highly entertaining. Readers who fall in love with the characters need not despair, because the author is currently working on a sequel. The Covert Captain is some of the best lesbian historical fiction out there.

'Any Other Way: How Toronto Got Queer'
Novelist Tereska Torrès, 92, has Died
'The Late Parade ' by Adam Fitzgerald