‘How New York Breaks Your Heart’ by Bill Hayes

‘How New York Breaks Your Heart’ by Bill Hayes 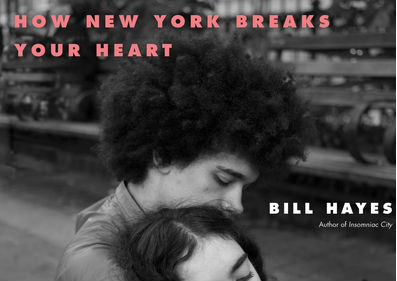 “First, it lets you fall in love with it. And lets you think it loves you back. . .and the love you feel for the city becomes the love you have for another man.” — Bill Hayes

I first came to the photographs of Bill Hayes in his unforgettable, poignant, and resonant memoir, Insomniac City.  The memoir is a collage of his story, narrative, notations, and diaries of coming to New York after the death of a partner, and finding in the city a kind of palate cleanser for grief and a new life. What he also found was a transformative new love with the writer Oliver Sacks, who sadly he would also lose to cancer in 2015. In those first images I encountered in the memoir were indelible portraits of New York from the eye of a non-native of the city. I was enthralled with the freshness and the honesty in every one of them. Also included were some of the most beautiful, and heart-breaking (heart-opening) portraits of Sacks himself over the period of time from their first meeting up to his death. The images of the city, in portraits of its many denizens, landscapes, and bustle, all had one unchangeable quality to me: there was love in every one of them, and it is not saccharine to say so. There is no other word that quite defines more clearly what they reveal. The intimacy with which Hayes found the perfect moment to capture was evident; the eye of someone coming to New York for the first time, and seeing it perhaps more deeply (refreshingly) than a native New Yorker might.

In this new collection of photographs, Hayes provides us an even larger look at a New York we are in constant interaction with–its noises, colors, its claustrophobic (yet somehow thrilling) density, and its openness, welcome diversity, and indeed, its ability to break our hearts. It is the “how” of the title that pursues us, like some constant voice: “Is this how? Is this?”

In its black-and-white, as well as luscious color images, Hayes show us, time and again, the vicissitudes that constantly beckon: lovers, often coupled in private and public displays of affection; the raw skin of New York streets, alleys, parks, and thoroughfares; its almost surreal quality at times, when even a lone, soft pink dress blithely floats, bodiless on a fire escape, calling back the woman who was once inside.

But what is it that New York does that photographs of other cities do not depict in the same way, to move us?  For Hayes, it is the culmination of so many disparate events and personages, all with a cumulative identity that is unique and compelling: street vendors, construction workers, cops, diners, basket-ball players, protesters, subway riders, parade-goers, musicians, mothers, fathers, babies, and always, always, lovers. And it is in those photographs particularly that we find the indelible, transitory, heartbreak of the city.

The book’s voluminous portraits capture lovers in a way few do, and when I think of the great photographers who have depicted this city–Elliot Erwitt, Helen Leavitt, Diane Arbus, Gordon Parks to name only a few–Hayes adds to this bounty with his own tattoo. His New York accommodates its speed, its antics, its ineffable quality of life now: there’s not all that much time. Intermittent texts about how and why Hayes photographs accompany the images: “Sometimes, people ask, ‘Why do you want to take my picture,” “but usually they say nothing, ask for nothing, note even my name. And if they give me theirs, I usually don’t remember it,” “Here in the summer—on the same park bench every night at five,” “Sometimes they disappear.” He is a visual flaneur, with the best photographers’ ability to come right up to you and face you with his question.

In doing so, if only for that small space of time in which his subjects allow a complete stranger to take their image, Hayes finds that instant in which they reveal so much of what they are: an older woman on a bench surrounded by leaves looks to him with lavish eyes and a giant ring on her aged hands; a young woman looks up at us from a lawn of grass, her hair a deep-died red, as she presents a guileless smile; a young man, cigarette in mouth, and his t-shirt wrapped around his head, stands before old coffee cups in front of a store advertising cannabis and a bong; a beautiful young man in a torn shirt displays his hoop earring and long metal necklace; on a park bench, a woman industriously writes in a notebook on the back of her napping male friend, strewn over her lap; a beautiful drag-queen high-heeled leg up, shows an extraordinary muscled gam; against a graffitied wall, a bearded Adonis flexes for Haye’s camera. And one stunning portrait of Oliver, sitting among a blast of pink flowers.

Hayes’s sense of composition is wonderful. He includes just enough of–or eliminates–those things in the frame that will define the subjects and their surroundings. His black-and-white images are graphic in their contrast of light and dark; his color images turn on light that is illuminative rather than just depiction. All of the images conjure New York by showing a city made of one idea of commonality that it shares: “We are all different here. You are welcome to be different too.” And perhaps that is what breaks us: that at its very least, New York does welcome every aspect of diversity that lives, loves, or dies within it, for no matter how short or long a time.

Hayes’s photographs show that peripheral watcher from the sidelines, who is suddenly center stage. These are portraits of secure stares, adamant smiles, shy caution, and outright delight, made with respect for the individual encounter and presence with his subjects. So, in the end, how New York breaks our heart is by its welcome, by its uncanny juxtapositions of overload and the pastoral, and by its seemingly endless capacity for showing its ability to not only thrive–but to live out loud who we are. And yet, one comes away after seeing these images, knowing there is a fragility to this city’s faces too; the fact that all this is so transient, the human interaction perhaps only a camera-second pause in the exorbitant beauty that can be found here on a daily basis. And for me, the images are too, a tribute to Oliver Sacks, in a sense that is palpable, the presence of that love that was shared in this city. That is one way it breaks your heart. Luckily, I believe, Bill Hayes will continue to show us how it opens us, too, to all the possibilities that our eyes can imagine.

'My Avant-Garde Education: A Memoir' by Bernard Cooper
'Fanny & Stella: The Young Men Who Shocked Victorian England' by Neil McKenna
'The Late Parade ' by Adam Fitzgerald