‘My Life as a Goddess’ by Guy Branum

‘My Life as a Goddess’ by Guy Branum 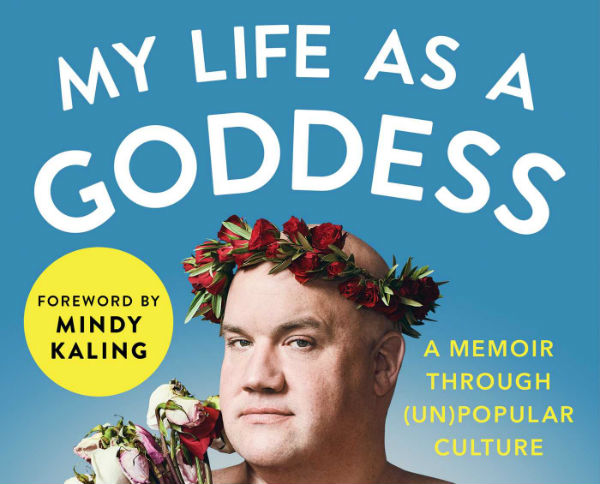 Guy could have taken an easier route. He could have slapped together a book of funny essays, really leaning into being #relatable while dishing a little dirt. It would have been fine.

However, Guy has always been interested in the relationship between real life and artifice as it manifests pop culture, what it illuminates and what it warps, which can be seen and heard as he hosts Talk Show the Game Show and the Pop Rocket podcast, or in his stand-up. So instead of simply being some stories put to page, My Life Is A Goddess is a collection of field notes from a life lived alongside the worlds presented to him in television and movie screens, creating something that is equal parts storytelling and media criticism.

Throughout the chapters, readers follow Branum’s life as gay Jewish man, starting with his childhood in a rural town outside Yuba City, in Northern California. Looking to escape a place that doesn’t understand him, he searches for interesting places in books and on television. Then, he gets his ticket out–physically, not just metaphorically–by attending Berkeley College. Later, while attending University of Minnesota Law School, he finds himself deeply miserable and fearful of a future ahead that consists of him in the closet and trying to make it as a lawyer. After coming out to his parents and finishing his law degree, he does a soft reboot on his life by returning to his college town. It is there where he begins doing stand-up comedy, eventually landing one gig after another writing for TV shows.

Strewn through these tales are various thoughts on television, which serve as either a bizarre window to the outside world or a funhouse mirror reflection. He discusses how most fat people in media only seem to exist as characters who struggle with their weight, how the witches on Bewitched subversively played with the structure of the suburban household, the complicated relationship gay men have with their own representations on screen, and the queer narrative of My Best Friend’s Wedding.

The undercurrent of this book is Guy’s veneration of words and stories. From an early age, there was reverence to the power of words. Reflecting on a situation when he forgot the word of something he wanted, he captures his realization of the importance of language:

This strange little hunger of mine changed me. The same way my hunger for snacks made me fat, my hunger for words engorged me. It made me fit into spaces differently. Whether I realized it or not, I had wanted these words for the power they would give me. […] But there were more private and subtle powers I wanted, too. I wanted to be able to explain ways I felt that did not make sense. I wanted to put words to loneliness, desires, and fears that it seemed my classmates and cousins didn’t have.

It is no surprise then that Guy has been focused primarily on television, a tool for telling stories to a mass audience. Stories often, in one way or another, tell people what society expects of them. They also provide windows to other worlds, possible alternatives. There is a power in an understanding of the former and a power in the imagination of the latter.

What elevates the writing beyond an assortment of thoughts and anecdotes is Guy’s honesty and the heart at the core of the book. Regarding the former, this not a book in which he trumpets himself to be a pure hero, nor is it a story of his triumph. Guy fully admits to bouts of pettiness and less-than-savory moments. There’s a reason why the book is called My Life As A Goddess and not My Life As A Saint: goddesses through out mythologies are often beings of great power, but not always of great nobility. (That and the bookends of the book are about how he’s inspired by the stories of Leto and Durga, respectively.)

As for the heart, I think the best example of this is the chapter, “The Man Who Watched The Man Who Shot Liberty Valance.” Through his understanding of the titular movie, Guy explores the complicated relationship between him and his now late father–the story of two men who don’t quite understand each other as way to understand the real lives of two men who never fully understood each other. This early chapter makes it clear that Guy is not throwing out these discussions of pop culture solely because he has a wealth of knowledge about it, but because he uses it as lens to view the world, even with the most personal of experiences.

The book is a cocktail of asides, digressions, footnotes, hyper-specific references to somewhat obscure pop culture items, and a voice that is equally self-deprecating as it is proud. If the list prior appeals to you, then absolutely pick up this book.

But while I have this cocktail metaphor, let me extend it by saying: one should take a metaphorical sip before reading by watching/listening to his shows and comedy. If you’re familiar with his work, the book can take the vibe of a friend sharing stories, discussing things at brunch. Without the context–knowing that he regularly bounces off people and generously loves other people’s contributions–I could see the sharing of his thoughts coming across as pontificating. That, or wait for the audiobook.

Even though it is labeled as a memoir, it’s a better read as an essay collection, one that also happens to detail a life in chronological order. It may seem like a distinction without a difference, but it will make his digressions, such as a chapter that initially purports to be about football but ends up being a briefing on the history of Indian-American culture in his rural hometown, feel less like detours and more like taking the scenic route.

Again, this could have been a typical Hollywood memoir; the story of someone triumphantly making it from one side of the television screen to the other. But, Guy has rarely fit the expectations thrust upon him. This book is no different and all the better for it. Instead, readers get a tour of his life and the pop culture landscape with one of the funniest and wittiest tour guides in town.

Discussing 'Stars in my Pocket Like Grains of Sand' with Dale Cooper
'Windy City Queer: LGBTQ Dispatches from the Third Coast' edited by Kathie Bergquist
'A Heaven of Words: Last Journals, 1956-1984' by Glenway Wescott (edited by Jerry Rosco)