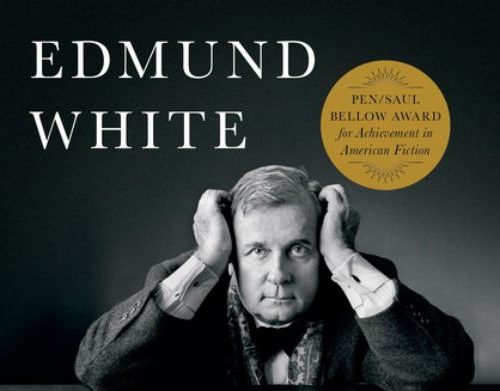 ‘The Unpunished Vice’ by Edmund White

‘The Unpunished Vice’ by Edmund White 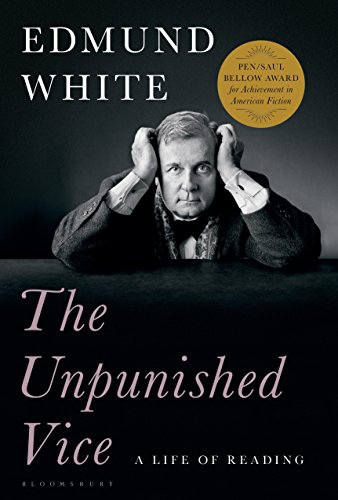 As the consummate memoirist, you would think Edmund White (My Lives, City Boy, Inside a Pearl) had left no page unturned, but then this diamond surfaces: The Unpunished Vice: A Life of Reading. Here is a multi-faceted account of superlative literary reflection, borne from the earthquake (life-quake?) of a heart attack. Here we have memories and discourse on a lifetime of books read, the texts that have influenced White’s art and thinking–books savored, books turned over again and again as new aspects reveal themselves, and most important: the people, the friends and colleagues who delivered these books into his life.

Edmund White suffered a heart attack in 2014, which left him for the first time in his life uninterested in reading or writing. Surreal daydreams swirled up to fill this void, and when this drought broke, he finished work on the novel Our Young Man (it was halfway done before the heart attack) and in reading again, began to consider the habits and desires that had filled his shelves with books. Readers of his previous biographical (both fiction and nonfiction) works will run into a familiar cast: his somewhat wacky mom gifting the young White a biography of Nijinsky, his close friends in young adulthood, Marilyn and Charles, swaying his impressionable taste with books and literary conversations. Boyfriends and crushes appear; his husband, Michael Carroll, once a young lover from Inside A Pearl, is now a published peer with clashing tastes and convictions. As White narrates coming into his own as a writer, The Unpunished Vice grows into a veritable avalanche of interesting books and talented folk: the early admiration of Nabakov, the friendship of John Irving and Joyce Carol Oates, just to name a few, are all described here with wit and candor. The Unpunished Vice itself is dedicated to Rick Whitaker (Assuming the Position, The First Time I Met Frank O’Hara, An Honest Ghost), a favorite author of mine, whose friendship is lovingly, rakishly detailed.

White visits his own books with the lightest of finger taps. Only when a solid correlation in another text, a stylistic point learned or a moment of inspiration, presents itself are we treated to the germinations of his own work, and then often with just a sentence or two. These moments, though fantastic, fall outside the thesis of tackling a life of reading, and those interested can find satisfaction elsewhere in White’s work, the Genet chapter in My Lives, for example, or specific author monographs in Arts and Letters and The Burning Library.

As a memoir, The Unpublished Vice also serves as an important document chronicling gay literary history (more on that later). The characteristically generous dollops of advice also place this book on the books-for-writers shelf.

I like to read great books not because I’m hoping to imitate them but because I want to remind myself how good you have to be to be any good at all. We won’t be read in the light of other writers in our zip code or decade but as we compare to Proust, Joyce, and Nabokov. History has set the bar very high, and one must jump over it, not do the limbo under it.

So simple it could be printed and taped up on the wall as permanent advice to an aspiring writer.  And then there are the frightfully inspiring observations:

I think in fiction we admire energy more than virtue-even in an energetic paranoid, like Kinbote in Pale Fire, who takes all the unbleached floss of experience and weaves it into a tight, gleaming knot. There is an energy, a force, in paranoia; the paranoid might be called a completist. He reassures us that creation follows a design, that things aren’t running down through entropy.

Don’t expect doctrine, but fluidity here. The running commentary on what makes a viable novel, and the conversation with himself as he reviews a lifetime of reading, is breezy and affirmative. And breezy is a compliment to his style, attesting to how enjoyable the ride is-the knowledge shared is just so artfully compact. The titles that pour fourth not only invite you to recall your own favorites, but more than once I dropped something into my amazon.com queue or checked online to see if it was currently available at the Strand. Expect to fall outside of your comfort zone here and there. I was lost when he discussed Russian novelists, not having covered much ground there. Conversely, I was relieved to see my opinions of 20th century Japanese literature justified (though I enjoy Mishima’s novel-length suicide notes and White doesn’t).

I would like to politely chastise the reviewer elsewhere who complained that Ed spends too many compliments on literary friends in this book. Actually, the commentary on literary relationships elevates The Unpunished Vice. The stories of nourishing artistic and intellectual camaraderie make the gift of a particular book all the more meaningful, the lessons learned applicable to life, not just the trade of telling tales. Recounting these connections provides an important history of gay literary output, the intersections of which won’t be found anywhere else.

First and foremost, ours is a history of friendship.

For well over twenty years, I have committed myself to reading one author biography a year to better source the secret to being a successful writer (and the answer is a rather dull one, my friends: talent + time management). These biographies, however, big and small, all share a singular failing: they never fully plot out the reading life that makes a writer. Sure, the drama of relationships, the pathologies found in bottles of liquor and the like lend themselves to much more theatrical reading than, say, a list of books. Still, these wholly unique libraries should be cataloged for a deeper understanding of influence, of development, those secret competitions and thirsts that form a successful writing career. I’ve only encountered one such book, Thomas Wight’s estimable Built of Books, a celebration of Oscar Wilde’s reading habits. Surely there are others. (Though it’s worth noting that White clarifies my thesis toward the end of The Unpublished Vice by warning us not to judge a writer by his library, as favorites are passed to friends and shelves fill up with books to blurb and review.) This makes this book all the more valuable. Early on, he quotes his younger self’s Wildean pronouncement, “I may never be so well known as John Updike, but to my few readers I’m indispensable.”  Well that’s certainly changed, as attested by the PEN/Saul Bellow Award for Achievement in American Fiction that was bestowed on him earlier this year; Edmund White now is every bit as well-known as Updike or any of his contemporaries in American letters.

The Unpublished Vice is an exquisite, winding staircase though the rich and varied library of an important writer’s readings; one that, like the very best books, delivers the reader to secret but familiar chambers seemingly—if only—without end.

'Hold Tight Gently: Michael Callen, Essex Hemphill and the Battlefield of AIDS' by Martin Duberman
'Playing by the Book' by S. Chris Shirley
'The Photographer’s Truth' by Ralph Josiah Bardsley