‘The Life and Death of Latisha King: A Critical Phenomenology of Transphobia’ by Gayle Salamon

‘The Life and Death of Latisha King: A Critical Phenomenology of Transphobia’ by Gayle Salamon 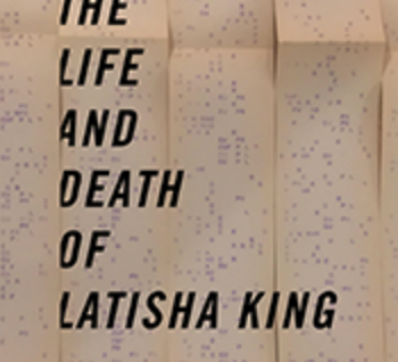 On February 12, 2008, a fifteen-year-old student sat down at a computer in a classroom at E.O. Green Junior High in Oxnard, California and typed out the name “Latisha King” at the top of the page. Moments later, fellow student Brandon McInerney stood up and calmly shot Latisha twice in the head. Local and national media coverage swirled around the case, portraying Latisha as “Larry”–a gay, rather than trans, Black teenager–and erroneously speculating that she had been killed for asking Brandon–a fourteen-year-old straight white boy with connections to a white supremacist group–to be her valentine. Regardless of its veracity, this version of the story subsequently inspired a heartrending monologue on The Ellen DeGeneres Show, a celebrity-laden PSA, two novels, and a play.

One could be forgiven for assuming that the true story behind the life and death of Latisha King would be the subject of Gayle Salamon’s new book, The Life and Death of Latisha King: A Critical Phenomenology of Transphobia. After all, that’s what it says on the tin. However, what readers will find inside is a handful of moments from the trial transcripts given a close reading in between arduously long, esoteric discussions of phenomenological theory.

Salamon’s book shines in these close reads, though. Throughout the book, she turns our perspective on the trial away from its gruelling examination of the gender non-conformity of Latisha King and onto the gendered embodiments of the teachers and attorneys instead. When one teacher, Shirley Brown, expresses on the stand how appalled she was that Latisha King dared to wear high heels, Salamon unpacks Brown’s “gender envy–an affective cloud around the fact that Latisha’s motility in the boots seemed to evince more ease and comfort than most grown women would be able to manage by [Brown’s] own report.” Salamon adds, both humorously and insightfully, that “it may or may not be relevant to observe that Shirley Brown delivered this testimony as she sat in the witness box wearing a pair of shoes that had at most perhaps an inch of lift.”

This turn of the camera illuminates the level of disgust nearly every adult in Latisha’s life, as well as the defense attorney pushing an illegal gay panic defense, had towards Latisha that in retrospect lead inexorably to her murder. Salamon in effect reverses the horror of a court case that put Latisha’s gendered embodiment on trial as a form of “aggressive sexual behavior,” instead subjecting those responsible for her death to the same level of scrutiny. It would be satisfying, if only it weren’t so depressing.

Salamon’s book may be most insightful to those already deeply invested in the study of phenomenology. Half the book is taken up discussing phenomenological theory, with a few dips in the Freud pond for good measure. To those outside the field, the discussion becomes increasingly arcane. Due to the length of these sections, it’s easy for the casual reader to get lost and have no idea what is being discussed until finally, thankfully, the book washes up on another island of court transcript.

Ultimately, we walk away from The Life and Death of Latisha King having learned very little about Latisha’s life or death. The book seems almost purposeful in its refusal to discuss Latisha’s difficult home life, her stay in a shelter at the time of her death, the near-constant harassment and violence she was subjected to by both students and teachers, and the upper administration’s tentative attempts to respect her emergent transgender identity. Nor do we learn almost anything about the violent upbringing and white supremacist beliefs of her murderer, Brandon McInerney. The missing story combined with the deep dives into academic theory ensures that this book will not make the leap from academia to a general readership.

Latisha King, a fifteen-year-old Black trans girl, was murdered by Brandon McInerney, a fourteen-year-old white supremacist, because he thought he was getting rid of a problem that was upsetting everyone at his school, from the teachers on down to his fellow classmates. In 2008, this act of brutality set off a national conversation but seemingly made little impact on the adults who fostered an environment in which this became inevitable. Though trans people have come a long way in the intervening ten years, and McInerney is now serving a lengthy sentence after his second trial (the first spectacularly ending in a mistrial because jurors couldn’t decide if Latisha deserved to be murdered), Salamon rightly reminds us not to assume that this couldn’t happen again today. In her closing coda, Salamon warns us of the rising tide of anti-transgender backlash throughout the United States buoyed by the Trump presidency. Ten years on and while the youth of today lead the nation in a critical battle for gun control, Black trans women like Latisha King face an epidemic of murder with no end in sight.

'Oscar Wilde in America: The Interviews' by Matthew Hofer and Gary Scharnhorst
'No Tea, No Shade: New Writings in Black Queer Studies' Edited by E. Patrick Johnson
'The Deceitful Heart : The Cult of JT LeRoy' Directed by Marjorie Sturm