‘The New Woman’ by Emma Heaney

‘The New Woman’ by Emma Heaney 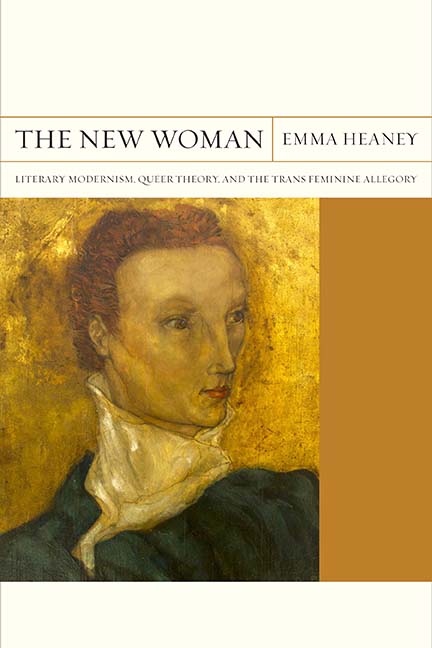 Emma Heaney’s The New Woman (Northwestern University Press) is a piece of new feminist scholarship that tails western society’s failure to consider transwomen as women sans stipulations. The text hones in on what Heaney calls the “transfeminine allegory” we’ve opted for in lieu of trans realities. As Heaney observes in The New Woman’s preface, this is the same tired line of thought that Piers Morgan unsuccessfully attempted to apply to author Janet Mock (Redefining Realness) during a 2014 interview:

Morgan’s questions focused on genital surgery and the responses of cis male lovers, what Redefining Realness calls “the titillating details that cis people love to hear’” (Mock, 227). When the interview aired, Mock was outraged to see that CNN producers has edited out her resistant responses and also captioned her image with the phrases “formerly a man” and “a boy until 18.” Via Twitter, she demanded that Morgan “stop sensationalizing [her] life and misgendering trans women.” CNN promptly invited Mock for a repeat appearance. An aggrieved Morgan asked “to learn why it is so offensive to…say that [Mock] grew up as a boy” and then “had surgery…to become a real woman.”

This time Mock was prepared to answer Morgan’s insistent framing of womanhood in cis terms. All babies, she pointed out, are assigned a sex at birth: “a matter none of us [has] control over.” Her story, she insisted, is not about what surgeries “I may or may not have had. It is not about how I disclose my gender to people. It’s about who I am now.”

Mock’s sentiments are the broken record of transgender history. Luckily, transfemme innovation knows no bounds. There are many different ways of saying the same thing. These words can be heard in Mira Bellweather’s Fucking Trans Women, a zine that establishes the transfeminine body as being capable of diverse pleasures without medical intervention. They can be explored in the Trigger: Gender as a Tool and a Weapon exhibit at the New Museum. They can be seen in Liz Rosenfeld’s short experimental film, Frida and Anita, that presents the queer dancer Anita Berber as a transwoman (a delightful character who, following Heaney’s observations, would’ve been viewed by gay rights gods Magnus Hirschfeld and Karl Heinrich Ulrichs as her Weimar Republic contemporaries: “entrapped” in “his” body and in need of surgical intervention in order to truly “become” a woman).

Heaney thumbs off Morgan’s four primary beliefs: that transfeminine existence is new, that trans women must present their credentials before cis people to be assessed for authenticity, that all individual trans women feel exactly the same way about their bodies, and that trans feminine experience is ultimately impossible to understand. Then, she gets to work.

The New Woman is a rigorous text. It pores over early psychiatric observations by Richard von Krafft-Ebing and others, pre-WWI gay rights advocates, modernist writing by Huxley, Joyce, and their peers. Works by queer theory’s seemingly impenetrable darling like Judith Butler also receive due critique for dismissing womanhood before allowing transfemininity residency within the category. Along the way, Heaney sizes these literary and medical artifacts up against what she deems “vernacular” statements by transwomen who’ve happily considered themselves women, regardless of their bodies. The dissonance between theory and actuality is substantive.

Heaney’s title boasts a double meaning. “The new woman” alludes 1.) to the liberated women, often bourgeoisie, who emerged in the States and Europe in late 19th century and 2.) the transfeminine people whose existence was scrutinized by sexologists around that same time. One such liberated woman was the modernist author Djuna Barnes, primarily known for her 1936 novel Nightwood.  New Woman also addresses the under-acknowledged moments of connection and solidarity between cis and trans women (this includes a mutual struggle to share community with men, both homosexual and heterosexual). Heaney cites the story of Franny Park and Stella Boulton, two transwomen residing in 1870s London. Arrested, they were subjected to the same invasive examinations as cis women accused of prostitution, their anuses treated in a violating manner akin to the accused cis womens’ genitals.

The New Woman approaches Barnes’ work–long dogged by feminist scholars for depicting cis feminine characters in varying yet inventive states of physical distress–with fresh ideas, arguing that Barnes’ oeuvre produces “a female essentialism that is located in bodily structures and experiences” that also broadens “the kinds of bodies that can have these experiences.” By making misery an all-inclusive feminine trait, Barnes teaches us about what could be easily kept under wraps in the name of social propriety. Heaney focuses her attention on Doctor O’Connor, a transfeminine character who makes appearances in two of Barnes’ works: Nightwood and the gutting roman à clef Ryder (1928):

Belying all of this commonality, however, and lest we ally Barnes too cozily with Freud, we must remember that O’Connor is also expressing a desire that is uniquely impossible and literally unthinkable within the terms of Freudian psychoanalysis. O’Connor expresses an identification that in Freud does not exist. Freud arrives toward the end of his essay Femininity with the claim that “we are now obliged to recognize the little girl is a little man…. It seems that with them all their masturbatory acts are carried out on this penis-equivalent, and that the truly feminine vagina is still undiscovered by both sexes” (“Femininity,” 146). Nowhere does Freud consider possible O’Connor’s frustrated desire for “womb as big as a king’s kettle.” O’Connor desires the disappearance of her troublesome penis; she desires the castration that for female and female child alike is the ultimate horrifying threat.

This is Heaney’s most “favorable” reading of a modernist author who elided their era’s day’s medical and psychoanalytic savvy into his/her creative work–which is to say, closest to the historical grain of transfeminine experience.

The New Woman’s content implores the reader to get on its level. Transwomen are women, have always been, and–in some cases–were more recognized as such in the past. A number of the book’s chapters will be invaluable to women and gender studies instructors who wish to excerpt readings on trans activism and/or history on their syllabi, namely Ceased to Be Word and Became Flesh and Materialist Trans Feminism against Queer Theory (the latter of which can be partially found in the May 2016 issue of Transgender Studies Quarterly).

While it’s not exhaustive (imagine if such a documentation existed!), Heaney’s work is thorough, managing to draw in “perishable” histories that we stand to benefit from today. For example, Heaney makes reference to Black trans activist Marsha P. Johnson’s positive experience with New York City’s lesbian community during radical feminism’s most fervent years:

Once in a while, I get an invitation to Daughters of Bilitis, and when I go there, they’re always warm. All the gay sisters come over and say, “Hello, we’re glad to see you,” and they start long conversations. But not the gay brothers. They’re not too friendly at all toward transvestites. . . . [because] a lot of gay brothers don’t like women!…. And when they see a transvestite coming, the reminds them of a woman automatically, and they don’t want to get too close or too friendly with her. (Jay and Young, 114-15)

The New Woman is an exciting breakthrough for scholars and armchair readers alike who are seeking to put the femme in feminist studies, lesbian studies, and even queer theory. As a comprehensive text, it cracks open the door for future academic work and auto-theoretical transfemme writings that might mirror and spar with Paul Preciado’s Testo Junkie. New evaluations of post-modern literature that dabbled with Freud and his friends (such as Sarah Schulman’s 1992 novel Empathy and her earlier fiction) are also likely to be motivated by and indebted to Heaney’s work.