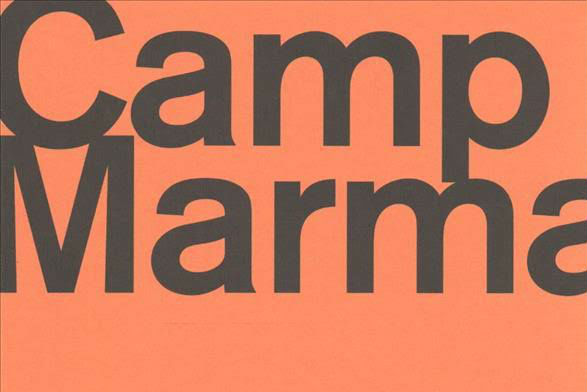 The second installment of a trilogy of trance notebooks, Camp Marmalade picks up where Wayne Koestenbaum’s first book in the series, The Pink Trance Notebooks, leaves off. Which isn’t to say it follows. These books are not really a line and they don’t connect end to end. They are more modal than sequential. In Camp Marmalade the reader is thrown right back into the snarl and constantly retangling snatches of Koestenbaum’s stream-of-consciousness musings and reflections. Susan Sontag, hook-ups, habits of consumption (food, writing, art), habits of creation (painting especially), family, friends, dead celebrities, dreams: all of these swirl into a kind of existential cotton candy cloud spun big as life.

Like many contemporary performance artists, Koestenbaum deals in discomfort and mundanity. He doesn’t ask what transcends the everyday, but what is it about the everyday that’s worth looking at. Seemingly everything. In any other review I would select an especially crystalizing line here that seemed to sum up Koestenbaum’s central concept of the everyday, but, for better or worse, Koestenbaum doesn’t write like that, which is to say the purpose is not driving each line forward nor is each trance stanza somehow supporting it. If there is argument it exists rhetorically on the scale of the stanza, and subconsciously in the larger connections squirreled away in the book as a whole.

If I thought there was some sense of a core for Camp Marmalade it might be this early passage, which stuck in my mind as I read everything after it:

tautology, closed set—
terms create each
other and lead to a dance,
a faith-based
system rather than a
narrative corridor
with exits and entrances

It is less important then that the reader find a corridor down which they walk from point A to point B, from nursery to ballroom to bathroom. After all, as Koestenbaum says, “aimed language / is destroyed language.” This faith-based approach may very well be what is resorted to in a text that lives in the chaos of the “delirium of not knowing / how to frame or contextualize / the process.”

But there is a question as to whether or not we believe that these stanzas, written in trancelike states and reshaped in only the most minor ways, really just come out this way. The recognizable underwire of some sort of structure either indicates a superior intellect shining through the subconscious (which very well may be the case in Koestenbaum) or the retroactive shaping of “an assembler” as he calls himself (specifically in contrast to being an intellectual, an identity I think the lady protests against a little too much in light of the sophistication of the text itself).

But another nostalgia nonetheless remains strong, one for an older kind of faggotry—high-meets-low-brow, a Warhol faggotry, a French faggotry, the sinister and morbid playfulness of old nursery rhymes (“London bridge is falling down”). “Orange is vulgar or wrong or us” Koestenbaum writes at the end of one stanza, the next seeming to complete the thought “we are orange people—orange / defines our otherness and rage.” This resonates deeply with the writing of James L. White in “Autobiographical Fragment” from the late 70’s, the era in which Guibert too was beginning to write Mausoleum. “Don’t be confused when you see a swishy homosexual man being campy and outrageous: you’re observing anger, and it’s anger and outrage the homosexual is often not aware of and so he takes his feelings of violence and frustration out by breaking the icons.”

Camp Marmalade is not as concerned with pageantry or spectacle as it is with simple quotidian drama, the small turns that seem in the moment of living to be important enough to influence everything afterward though, once in the unpromised future, we find they influenced nothing really, sometimes recurring, sometimes simply fading into the long syntax of life as it has been lived. Koestenbaum seems on the page to debate “time spent forming / sentences versus leaving / sentences unformed,” though a careful reader will also see that “skillfulness abides in / seemingly random and / unthought decisions—”.

And part of that skill I think is Koestenbaum’s ability to sustain playful grotesquery as a unifying mode. “Disgust creates a frame / for eroticism”  he says, and this book sees eroticism as the great glittery ghoul lurking in every room. And even without his glitter, you can

________find
eros in blankness,
then behold his blotches—
don’t cry, he survives his
blotches and neither splices
nor censors them—

And, because what is a poem but civic space, Camp Marmalade feels like it too is interchangeable with these two activities—a Delphic prayer to the great and blotchy god Eros; a man seeking some small part of that god in himself.

What Koestenbaum gives us is the catalytic spark for “the grimy circuit / language makes / in a body, round / trip from mouth to mouth.”  Language, that great circuit of telling and retelling, the grand ritual of line looped into narrative. And “rituals give pleasure but / also we receive pleasure / from destroying ritual”  don’t we? Though it can be hard to discern which side Koestenbaum is really on, the side of ritual or unritual (must he be on only one?), by the end of Camp Marmalade the reader, however confused they get along the way, feels happy to have danced the ritual dance in the grimy mess with him. A fun, weird, gay old time.

'Broken Like This' by Monica Trasandes
'Cornered: 14 Stories of Bullying and Defiance' edited by Rhoda Belleza
'Patsy' by Nicole Dennis-Benn