‘The Fletcher’ by K. Aten

‘The Fletcher’ by K. Aten 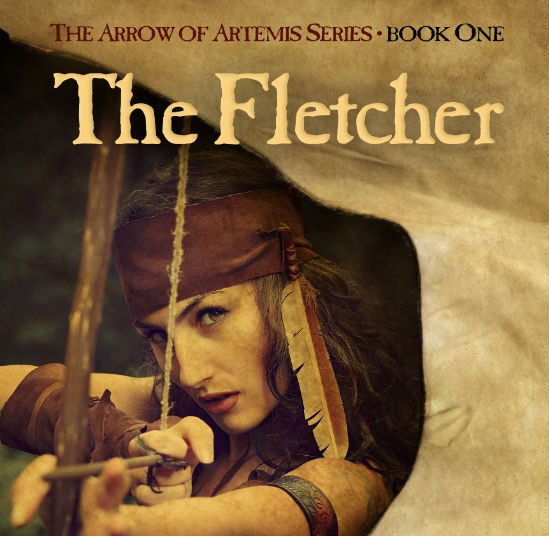 Kyri has been reared by her father as a fletcher, a maker of arrows in a land and a time when that weapon is a valuable and vital resource. The Fletcher (Book One of The Arrow of Artemis) is set in a mythical landscape inspired by ancient Greece. A fantasy not restricted by the need for historical accuracy, The Fletcher follows Kyri who, facing her father’s death and the loss of her home, is encouraged to join Shana, an Amazon warrior whom Kyri saves from a roguish band of King’s Guard. Shana is on a diplomatic mission when the guards accost her and Kyri’s dying father sees the Amazon’s arrival as an opportunity to protect his daughter.

The Fletcher is K. Aten’s debut novel. This first person account is Kyri’s coming-of-age story. At 19 years old, Kyri is a talented archer and fletcher, yet shy and naïve, having grown up in the isolated woods with little exposure to society. As Kyri travels with Shana, she begins the process of finding herself. Kyri resolves to become an Amazon like Shana, with hope of claiming a new family and identity. This coming-of-age story arc makes The Fletcher a good young adult reader recommendation.

The Fletcher had its nascence in Xena fan-fiction. The author has used the original TV show for inspiration to create a thought-provoking relationship between Kyri and her love interest, the Amazonian Orianna. The tall, dark-haired, blue-eyed Kyri is the younger and more innocent of the dyad, while Orianna, the petite, blonde, and green-eyed woman is the older and more experienced Amazon Queen, whose skills and expertise are already established and respected. These women are not mere retreads of the source material. Indeed, Kyri’s insecurities regarding her self-worth despite her contributions to the community are a refreshing character trait that provides new opportunities for character exploration.

The couple’s “meet cute” is delightful. Kyri feels a bit overwhelmed by the number of Amazons she is meeting. This is a culture shock for a woman reared in the forest with her parents. One morning, Kyri meets a woman who takes her breath away. She is lovestruck by the Amazon Orianna, who introduces herself as Ori. Ori welcomes Kyri and asks to play with Gata Antoli, the leopard cub that Kyri rescued on their journey. Kyri is immediately quite taken with Ori. Encouraged by Ori’s friendliness, Kyri confesses her anxiety over meeting the Amazon Queen. Kyri is worried that the Queen will not approve of Gata. Ori reassures, “Oh, I think you’ll be fine. I don’t think the Queen will turn you away because of this adorable gal.”

Later, Kyri enthusiastically describes her meeting with Ori to Shana. When Shana finally gets Ori’s name from the besotted Kyri, she says nothing of Ori’s identity. The savvy reader is in on Shana’s joke that Ori is Queen Orianna. The formal audience with the queen happens later that day, much to Kyri’s chagrin and Shana’s amusement.

Aten introduces some lovely leitmotifs around archery, as well as trees and leaves; even more could have been used to enrich the storytelling. The characters’ dialogue is a bit inconsistent, moving from implied archaic to very contemporary slang, that doesn’t consistently relate to character or the established culture.

Nevertheless, The Fletcher is a very engaging, action-filled, and readable story. One cares about Kyri and her companions, one roots for their successes, and one cannot help being charmed by the budding romance between Kyri and Orianna. Nor does one need to be a cat-lover to enjoy Gata Antoli’s antics. Aten has valid observations about communication in relationships as with Shana and a former love interest, Coryn. Further Aten’s treatment of the worship of Artemis holds thoughtful commentary on faith, its role in community, and even a woman’s right to control her own body and sexuality by choosing to “walk in the footsteps of the Goddess.” The Fletcher is a pleasantly page-turning volume of escapism, perfect for that summer vacation reading. This reviewer hopes that Aten continues to develop her craft.

'Looking for Lorraine: The Radical and Radiant Life of Lorraine Hansberry' by Imani Perry
'Collaborators' by Deborah Wheeler
'H' by Jim Elledge