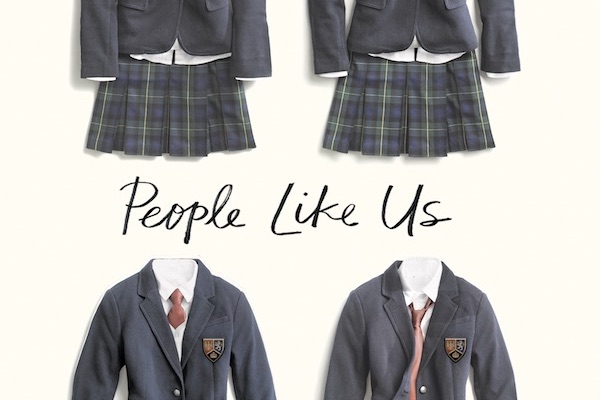 Dana Mele’s first novel, People Like Us, begins at midnight on Halloween. A group of laughing teenage girls peel off their clothes and streak through the woods to a nearby lake for their annual midnight swim. On this particular New England evening the water is chilly, but when one of the swimmers bumps into a dead body floating in the lake, it turns ice cold.

Set in Bates College, an all-girls boarding school nestled in the woods of New England, Mele’s novel smartly mixes mystery with a coming-of-age story that hits all the uncomfortable buttons. Protagonist Kay Donavon is in her graduating year and has struggled from a working-class background and a personally tormented past to climb to the exulted level of “it” girl, the fear-inspiring top clique at Bates. The girls in this inner circle are poised for graduation, scholarships, careers, and the lives they’ve dreamed of. Like mortals gazing up at the gods on Mount Olympus, the other Bates College girls look at Donavon and her crew with envy—and often, with much darker feelings than that.

After the dead body is discovered, the top girls fall and fall hard, one by one, as past transgressions are revealed in a brilliant, from-beyond-the-grave twist.

As in John Knowles’ 1959 novel A Separate Peace, the boarding school has long been a literary site of youthful longing and menace, as well as a closed world with a defined cast of characters, perfectly suited to murder and its investigation. Mele takes this familiar setting and modernizes it; dark forces claw at these untouchable girls via hacked computer accounts, cruel blog posts, and hidden electronic devices. The story is unabashedly set in the present day, giving the issues addressed an additional shot of realism. Mele captures the raw emotions of teenage years—today’s especially—where joy and despair hinge on social acceptance.

Told from Kay Donavon’s viewpoint as a first person narration, the reader is plunged into the action and, once the body is discovered, the pace moves quickly and rarely lets up. Donavon is a believably complex character whose role of hero often slides into the realm of anti-hero as the sheen of her perfection, and that of her friends, wears thin. Through Donavon’s actions and the trauma they instill in herself and others, Mele’s brilliant first novel provides an astute reminder that no one is an angel. Not even the most popular girls at Bates College.

Hope Thompson writes for stage, film and television. Her plays have been produced in Toronto and Los Angeles, her award-winning short films have screened internationally, and she recently wrote for the CBC television show, Baroness Von Sketch Show. Hope is currently completing her first novel, The Blonde, and is a MFA candidate in the Creative Writing program at the University of British Columbia. Website: www.hopethompson.net