‘My Favorite Thing is Monsters’ by Emil Ferris

‘My Favorite Thing is Monsters’ by Emil Ferris 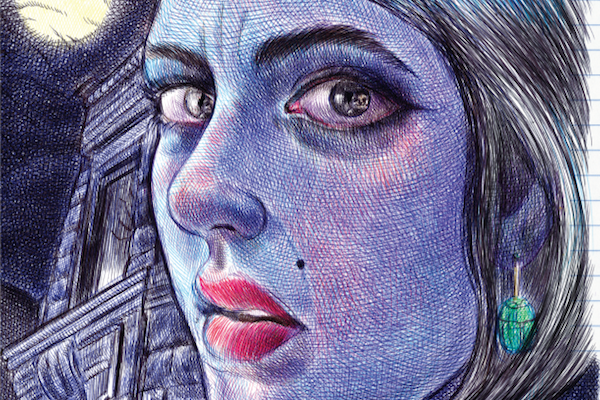 “Sometimes you don’t let yourself know what you know,” writes Karen Reyes, the 10-year-old narrator of Emil Ferris’s debut graphic novel, My Favorite Thing is Monsters, Volume 1. The text is made up of the pages of Karen’s notebook, where the aspiring artist records her thoughts alongside careful renderings of the images she encounters around her, from the walls of the Art Institute in her Chicago home to the covers of the pulp comics that she collects. While most girls she knows seek out models in the glossy pages of teen magazines, Karen begins to “let herself know what she knows”: her queer identity, through finding herself in the demons, vampires, and other monster figures she finds in both camp horror and high art. She draws herself as a werewolf, chasing after beautiful women while on the run from mobs of villagers.

Karen’s search for clues to her identity is one of several mysteries woven into the overarching whodunit story at the center of My Favorite Thing is Monsters. Karen’s beloved neighbor, a Holocaust survivor named Anka, dies mysteriously in what is ruled a suicide. Karen, however, is convinced that Anka was murdered. Recalling another iconic coded queer child, Harriet M. Welsch from Harriet the Spy, Karen dresses as a detective and sets out to investigate who killed Anka. 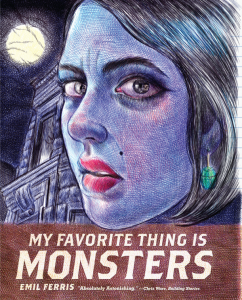 Karen comments, “the word monster comes from the Latin word ‘monstrum’ which means ‘to show’ … there are a lot of things we don’t see everyday that are right under our noses … just maybe–monsters are right under our noses, too.” The comics that she reads show her a distorted yet recognizable version of herself, expressing desires that otherwise remain hidden in the closet in mainstream society. However, as Karen finds, there are other kinds of monsters, who “want the whole world to be scared so that bad monsters can call the shots.” Her investigation of Anka’s death leads her into tangled questions about guilt and complicity, as Karen is confronted with a different kind of monstrosity in the form of both individual and state-sponsored evil. This kind of evil not only evades meaningful prosecution, but seems to be reborn in a new form in every place she looks, from the racism, gay-bashing, and misogynistic violence she encounters on a daily basis in late 1960s Chicago to the larger world-historical crises threatening her community, such as the Vietnam War and the assassination of Martin Luther King, Jr.

Ferris’s obsessively detailed cross-hatching produces images that at once appear to be draft sketches and nuanced, fully-realized works of art. Her technique masterfully echoes Karen’s experience of being in the process of growth and moving towards understanding while at the same time knowing deep down both who she is and the answers to the frightening questions that drive her. Ferris’s artistic and narrative style makes readers feel, like Karen, that all of the clues they need are right in front of them, yet resolution remains just beyond reach.

Volume 1 of My Favorite Thing is Monsters ends with Karen learning that she has “to enter hell” to find the answers that she seeks, signaling that she is on a hero’s journey that will be continued in the second volume of the series, which is to be released in October 2018. Over the past two years of the Trump administration, as we have seen increased attacks on the rights of the minoritized groups at the center of My Favorite Thing is Monsters–immigrants, people of color, women, and the queer community–the questions that Karen poses to 1960s America are timely and urgently relevant.