Lambda Literary’s Jeanne Córdova Prize for Lesbian/Queer Nonfiction, in memory of the beloved activist and author, honors lesbian/queer-identified women and trans/gender non-conforming nonfiction authors. The award goes to a writer committed to nonfiction work that captures the depth and complexity of lesbian/queer life, culture and/or history.

Judges Lynn Harris Ballen, Judith Branzburg and Claudia Rodriguez were unanimous in choosing Melissa Febos as the winner for this prize from among a large group of wonderfully talented lesbian/queer non-fiction writers who submitted their work.

From the judges: “The fearless intimacy of Febos’ past writing captures depth and complexity through a lesbian/queer lens. The raw and lyrical work in her upcoming collection of essays Girlhood–about coming of age queer and female in America–illustrates that she continues to be committed to producing groundbreaking lesbian/queer nonfiction.”

The award includes a cash prize of $2500. Febos will be recognized as the winner of the Córdova Prize at the 30th Annual Lambda Literary Awards ceremony on June 4th in New York City.

Tickets to the awards gala can be purchased at Lambda’s website. 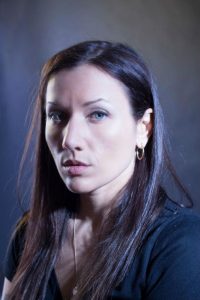 Melissa Febos is the author of the memoir, Whip Smart (St. Martin’s Press 2010), and the essay collection, Abandon Me (Bloomsbury 2017), which is a Lambda Literary Award finalist, a Publishing Triangle Award finalist, an Indie Next Pick, and was named a Best Book of 2017 by Esquire, Book Riot, The Cut, Electric Literature, Bustle, Medium, Refinery29, The Brooklyn Rail, Salon, The Rumpus, and others. Her second essay collection, Girlhood (Bloomsbury), will be published in 2019. Her work has appeared in The Kenyon Review, Tin House, Granta, The Believer, The New York Times, The New York Times Book Review, Lenny Letter, The Guardian, Elle, Vogue, and elsewhere, and she is the recipient of prizes and fellowships from Prairie Schooner,Story Quarterly, Bread Loaf Writers Conference, Virginia Center for Creative Arts, Vermont Studio Center, The Barbara Deming Memorial Fund, Lower Manhattan Cultural Council, Ragdale, The BAU Institute, and The MacDowell Colony. An Associate Professor of Creative Writing at Monmouth University, she serves on the Board of Directors for VIDA: Women in Literary Arts and lives in Brooklyn.