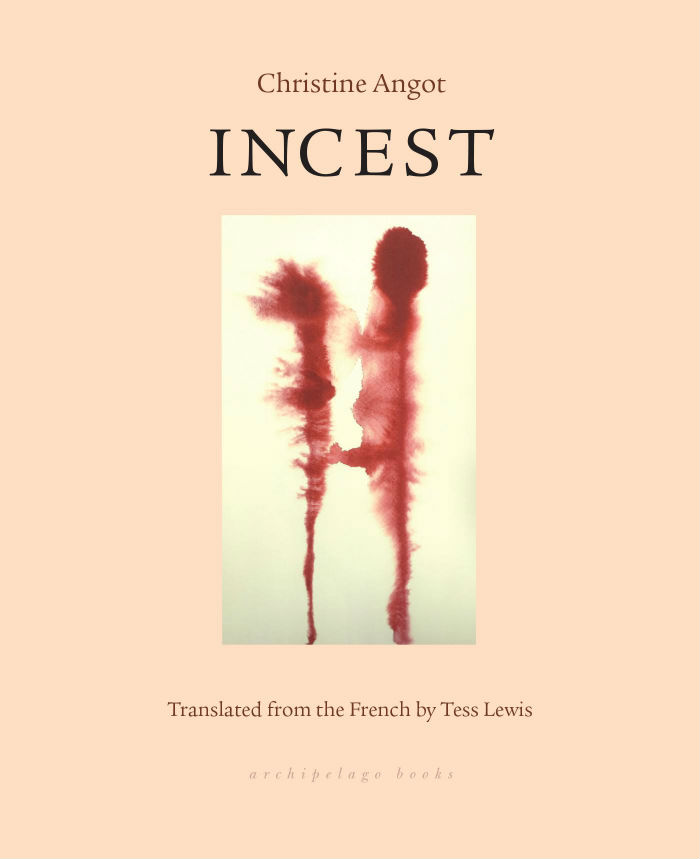 In her reflexively titled novel, Sujet Angot, French author Christine Angot quotes her ex-husband Claude, telling her, “Your writing is so unbelievable, intelligent, muddled, but always luminous, accessible, direct, physical.” Whether Claude actually said this (in l’univers Angot the possibility that a real person really said something is about the same as the possibility that they didn’t), the assessment is spot on: perhaps the best, most accurate review Angot could possibly receive. Angot works the spirit over. One is exhausted, but one also cries, Finally, an authentic experience! Rude and raw, artful but brash and unpredictable, like fighting with an animal. Not necessarily pleasant but of great value. Authors that write with clarity and decorum may never do it for you again.

Now, nearly two decades after its publication in French, we finally have Angot’s turbulent and controversial metafiction Incest (L’Inceste, 1999) in a translation by Tess Lewis (the only English translation I can find of any Angot book), published by Archipelago, a Brooklyn nonprofit whose list includes works by Breytenbach, Cortázar, Kafka, Laxness, Joseph Roth, and many others.

That brouhaha around Incest comes from its probably-pretty-much-total-but-maybe-not-quite-but-you-can’t-be-sure correspondence to reality, specifically the reality of the heterosexual Angot’s turbulent six-month liaison with the French lesbian actress Marie-Christine Adrey. “Performative” is Angot’s word for her autofiction, characterized as it is by obsessive self-examination and unbridled, visceral, nearly deranged emotion. The concept is explored again in her metafiction, Quitter la ville, which recounts the personal and media brouhaha that surrounded the publication of L’Inceste.

In L’Inceste, most of Angot’s rage and anxiety centers on what the couple will or won’t do for Christmas, and Marie-Christine’s breezy declaration that Angot is not welcome at her family’s holiday celebration. The details of Angot’s obsession with Marie-Christine are expressed as a deep, ragged, open, and very bloody wound. It is a sight mesmerizing and horrifying, but in spite of its horrors, the reader does not turn away from the muscles, tendons and bone Angot says are there and makes the reader believe are there, but whose bloody, agonizing vulnerability are routinely denied. (Fittingly, the Archipelago cover image is a blood-colored and frankly erotic abstract watercolor by Louise Bourgeois.) Angot flays herself alive, in the process making the reader as guilty as the allegedly demanding and insensitive Marie-Christine.

Angot’s agonizing over Marie-Christine ultimately turns out to be a long but necessary prelude to something simpler and more horrifying—the author’s youthful molestation by her father. Angot turns from rage and paranoia to a laser-focused slow burn. Her prose becomes somewhat easier to navigate, though her emotions and her self-abasement, along with her father’s abuses, appall the reader so frankly that the effect of these passages is almost cleansing.

For her raw rage and talent Angot is immensely admirable, but she is never cuddly or affable. Queer readers of L’Inceste might bristle immediately at her repeated insistence that she was “homosexual” for only three months. In the book’s second sentence she actually says she was “condemned” to be so. Angot often analyzes feelings and situations until her words disintegrate into a Gertrude Stein–like babble. In disintegrating and attempting desperately to reintegrate, Angot examines the process of writing—of expression—itself, along with every twist and turn of an obsessed, violated, powerless mind. The book is insanely alive, jolting the reader awake, daring to the reader fight to it; the reader emerges from these challenges dazed but uncertain who has “won.”

Claude was absolutely right: “unbelievable, intelligent, muddled, but always luminous, accessible, direct, physical.” This is what we might all hope to write, to make, to communicate. This should be everyone’s letter to the world. Let us hope more of Angot’s work reaches the English-speaking world, and soon.

'Through the Valley of the Nest of Spiders' by Samuel R. Delany
Ariel Gore: Taking Care of Mother
‘The Princess Affair’ by Nell Stark