“Whatever Doesn’t Stick to Your Body is a Word”

“Whatever Doesn’t Stick to Your Body is a Word” 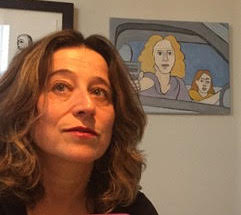 As a part of the Poetry Coalition’s new initiative Where My Dreaming and My Loving Live: Poetry & the Body, Lambda Literary invited poets to respond to the theme with a short essay. (Read last week’s contribution by CAConrad here.)

Whatever Doesn’t Stick to Your Body is a Word*

I am at a part of my life where I am confronted by, and think a lot about and feel a lot about, illness, loss of capacities, and death. And menopause—a physical and psychic force of the world that is, in my opinion, a scandalously untapped source of radical power.

Alongside menopause, I happen to be recovering from a generally traumatic part of my life, a series of events that destabilized me profoundly. I think of ‘it’—all the events wrapped into one—as a psychic near-death. That sounds dramatic but the more I read about trauma, the more accurate and not dramatic it sounds to me. Trauma (+post-traumatic trauma) is a physical fact of one no longer being as they were before. You can’t do what you used to do and you no longer derive happiness from that which was pleasurable before. Which means your fragile sense of belonging to a thing goes missing. Furthermore, reactions to events that are dire or good or bad or middling are out of whack. It’s dangerous—you don’t naturally act appropriately in your own self-defense or the defense of what you care about most. I wonder if we on the left in the United States are in a collective state of trauma and its wavery continuance…it’s not that we can’t do anything, lots is being done and unforeseen (today Richard Meier and James Levine reckoning, nothing less than amazing), historical shifts are happening that will be enormously meaningful if we can somehow interrupt the endangering of all life on our planet, endangerment now being executed with renewed fervor by that very mind-boggling yes and no cause of our collective left trauma.

But, I want to say, and this will become about me saying, that in the wake and recovery period of my near psychic death, not being evangelical (being biologically birthed through a jewish holocaust lineage), I have no special feeling for being born again.

Not because I don’t loathe being frozen, terrified, sad. Ugh. I loved my way of queer and radical pleasure, which always felt itself like political disobedience, both destructive of the system in its refusal** and constructive/making of something utopian. Always at least something out of the order of things. Loving. Dirty. Fun. I feel lucky and am mindful that it was a great and also white privilege that I got away with it for as long as I did. Which is perhaps a capsule of a more collective white queer refusal and its limits in still vulnerable bodies.

I have the great good fortune of not dying actually, like so many of us and so many of my beloveds. I get the chance to collect and activate shards into an afterlife.

I am interested in being a poet again or some sort of other kind of artist, amid the actual broken pieces of a storied feminist, queer and radical life. “Begin again” is a phrase that works on one hand, but fails me in how Calvinist and pressured a sentiment it evokes, of pulling oneself back up with the right attitude of Nike brand can ‘do it’ capitalist individualism. How many of my beloveds, have said to me, “But you’re resilient!” using a word that, when I first started hearing it popularly spoken, had meaning, in the sense that it produced an image (and a meaningful concept for the survival of endangered and precarious peoples and cultures and species). But, like corporate uses of “mindfulness” and “care” I now can only hear the word, resilient, as symbolic and disciplinary in its usamerican [sic] usage, yet another one of the bludgeons that keeps us in line as productive workers. “Be Resilient”…get over it, there is no space for your history, your brokenness and its pre-speech demands here.**

The fact of the matter is, the aging body, like the anxious or post-traumatic body, is physically and factually less resilient. Equally or more complex than the youth body. Filled with pleasures and the possibilities of them. Aging body as emergent yet anti-colonial body. Becoming ever more chiseled into itself. Unfinished sculpture. Literally less resilient. Not more or less beautiful, pleasure-ridden, wonder-filled with each new pain, challenge, effect of the years.

And therein the possibility of an autonomous buoyancy. New perversions, which is where queer politics and autonomy lie. This morning from my little dog’s body pressing against my legs. A relational, interspecies, inter-being eros. Perverted not pervy, I don’t come. But. The pleasure in and on my skin. Support. To lift myself up. As the surround of my chest negotiates grief-laced love.

Poetry, among other things, makes of us a demand not to get language correct, but to push language into exactitude of the moment, to make of language something beyond the body and of it, something that’s shared and distinct within your own poet body and the bodies of those who happen upon the poem.

What happens when the words that are supposed to do one thing to a feeling body…heal it or help it lift up out of bed or feel that something private has been translated and broadcast, or break a silence or…end up doing the opposite? Because the word, uncomfortably in our system, isn’t owned. Claiming words is powerful, charged and righteous. That’s not wrong, it’s political. As a poet, a lesbian and a communist, I refuse the (corrupted***) use of the word resilience as a disciplinary tool, and seek a not yet legible space for my perverted, anti-capitalist, physically and psychically unpredictable, gorgeous ruins. Their golden hour.

*The title of this essay comes from a line from Camille Roy’s play Bye-Bye Brunhilde  in her book Cold Heaven, O Books, 1993. The quote came to my attention this week when I read it quoted by the poet M. Ryan Murphy as one of the epigraphs on their manuscript Late to the Grieving Ground.

**Davy Knittle, a poet and scholar of queer geographies, interviewed me for “Cities, Planning and Poetics” on queer refusing poetic bodies, which you can listen to here.

***Another word I consider ideologically tainted/corrupted, is Hope…more on this in the future.

RACHEL LEVITSKY is the author Under the Sun (Futurepoem, 2003), NEIGHBOR (UDP, 2009) and the poetic novella, The Story of My Accident is Ours (Futurepoem, 2013) as well as numerous chapbooks, most recently, Hopefully, The Island, part of an ongoing collaboration with the artist Susan Bee. Levitsky builds and participates in a variety of publishing, collaboration and pedagogical/performative activities, such “Geometries of Recognition” a movement poetry workshop turned super8 film by Stephanie Gray. In 1999 she founded Belladonna* which is now Belladonna* Collaborative. She teaches writing Pratt Institute, Naropa Summer Writing Program and lay institutions in NYC.