‘Unspeakable Horror 2: Abominations of Desire’ Edited by Vince A. Liaguno

‘Unspeakable Horror 2: Abominations of Desire’ Edited by Vince A. Liaguno 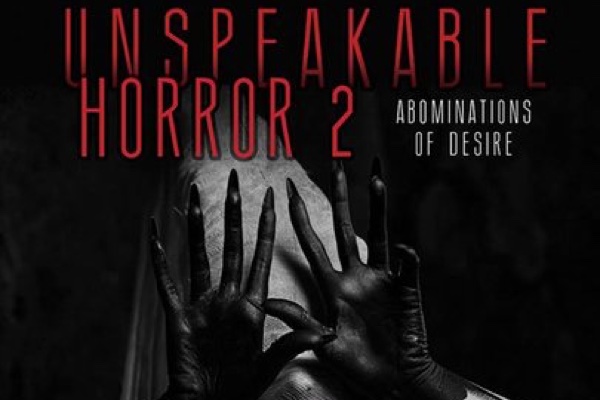 I have a confession: I almost declined to review this book out of fear, and I still faced a little trepidation when it arrived in the mail. What scared me? Was it the spooky cover, or the haunted material within its pages? No, it was really a couple of more mundane concerns that stalked me. One, in general, reviewing a collection of essays or short stories presents a bigger challenge than a book or novel because of their diverse and varied nature. And, two, I remembered the first volume, Unspeakable Horror: From the Shadows of the Closet, quite fondly–and sequels never live up to the hype, right? Add to those issues the fact that the first volume came out at a time when not much LGBT horror hit the bookshelves, while all sorts of scares, thrills, and chills make it into print for the queer community now. Would it feel as unique this time? So my first instinct told me to run for the hills. A voice in my head cautioned, “don’t mimic the idiots in a horror film who plunge right into the terror and their own death while the entire audience screams to go the other way!”

But into the dark basement, scary forest, and haunted house I went. And thank the ghosts, vampires, spirits, and other horrific elements that I braved it! My curiosity and love for all things LGBTQ horror got the better of me and I decided to tackle these short stories. As you can deduce from these ramblings, it indeed took me a while to wrap my mind around how to review a collection of stories and give the volume justice without doing a long, drawn out summary of each and every story. So that first bit of fear held true. But! The second point proves why we resist stereotypes and must approach everything with fresh eyes. Overcome those inhibiting fears! Because in a somewhat rare turn of events, I think the sequel outdoes the original, which says a lot about these stories because Unspeakable Horror: From the Shadows of the Closet remains a great and fearful read.

Vince Liaguno collected an amazing group of stories for the second manifestation of Unspeakable Horror. Three authors return from the first collection, joined by eighteen writers new to this volume. The stories include both gay and lesbian antagonists and protagonists, though more come from the gay side of things than the lesbian side. Liaguno created a theme of “speculative fiction centered on the abstract of desire gone awry,” and every story somehow fits that creepy notion. More noteworthy, every single story resonated with me. Not a dud in the bunch. If Unspeakable Horror: From the Shadows of the Closet helped to establish speculative fiction as a mature and important genre for queer fiction when it was published about a decade ago, then Unspeakable Horror 2: Abominations of Desire takes it to new heights and creates an expectation of excellence. Tightly written and edited, free of tropes and mundane writing, these stories propel the queer horror genre to scare us while making a statement about our world, and accomplish it with the best of writing possible.

So what can a reader expect? All sorts of terrifying monsters and experiences confront you in these pages. Ever hung out with a minotaur? Probably not, but you will here. And you might not like what you discover about them. Ever had a crazy friend, or at least someone you suspected might tilt toward the insane? Better watch out because you never know what family secrets of rape and torture hide in their minds. Sexual exploitation abounds, jumping out from the darkest parts of the mind to both entice with an erotic allure and then pounce with horrific – but tantalizing? – terror. Ever wondered what kind of creature your neighbor hides in the attic? Or what sexual proclivities your significant other may engage with that said creature? My advice – better not check it out because you may not like what you discover.

Ghosts haunt these pages, too, but not in a conventional sense. If a ghost story made the cut, Liaguno picked it because it offered something new. Yeah, a dead partner may come back as a ghost, but not to comfort and protect you. And that happens more than once. What if, on the other hand, you became a ghost, taking on the sin and fear of someone else in order to liberate them from darkness? A vampire or two invade these pages as well, but like the ghosts offer up a new take on the legend and the deeds of the undead. Zombies – contemporary horror could not ignore their presence – lurk inside the book but they only make the cut when they offer something beyond typical story lines.

Mysterious train rides. Hot but dangerous hook ups in Central Park. Special agents. Magic books. Nuns. Gore. Spooky stuff on a boat. Nasty jail scenes. I hope you get the picture. Horrific episodes born from desire gone awry reach out to frighten you time and again. The collection offers a roller coaster ride of love and desire, followed by terror and evil.

If you read this review to the end and feel a little cheated by my not telling you much detail about the stories within, good. I did that intentionally. Because no single review of this short story collection could do it justice in the space provided. So let me cut to the chase: if you like queer horror, read this volume. With a proliferation of novels and edited volumes in the field today, rarely does one stand out heads and tails above the rest. I overcame my horror of writing this review, and you should overcome your wondering about whether to read this book and go grab it. Time and again, you won’t be disappointed. Even if those desires of yours now take on a creepy tone, causing you to fear that they may go horribly awry.