‘Some Hell’ by Patrick Nathan

‘Some Hell’ by Patrick Nathan 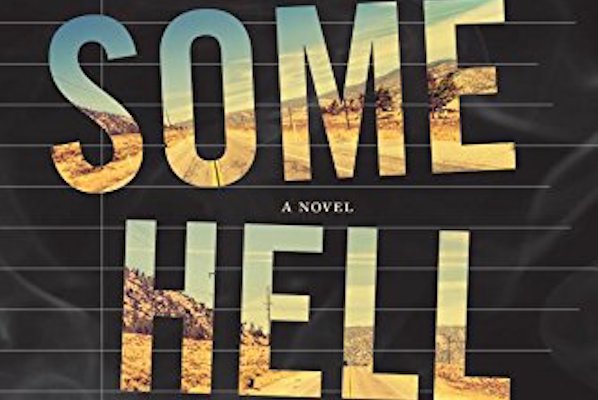 Many of us have sighed, shrugged, and explained to a well-meaning friend, “Oh, thanks for the recommendation, but I’m kind of done with fiction. I’ve gotten into reading [aviation history / comparative religion / cookbooks / insert nonfiction genre of interest].”

“But,” the friend insists, “it’s a debut LGBT coming-of-age novel!” That’s when we excuse ourselves to use the restroom, and climb out the window.

I’ll confess that I probably would not have chosen to read Some Hell, much less embraced this opportunity to review it, if I had not been familiar with the author’s nonfiction. Patrick Nathan is a thoughtful and provocative essayist, critic and interviewer whose work is reminiscent of Daniel Mendelsohn’s in Mendelsohn’s most generous moments. On the eighteenth anniversary of the 1999 massacre at Columbine High School, Full Stop carried Nathan’s essay “What Happens Next,” in which he addressed with incisive passion the National Rifle Association’s dominion over U.S. politicians. He suggested that we, the indolent consumers of reality-TV-style reportage, are complicit in the dozens of ensuing massacres. Among Nathan’s most multi-layered work is the 2016 personal essay “Parenthesis,” published at wordsinlight.org, concerning his grandfather’s obsession with his one-of-a-kind career—fashioning human dummies of wax and wood that were destined to be vaporized in U.S. government nuclear tests during the Cold War. In December, at the site Literary Hub, Nathan eloquently took on the Trump presidency: “Aside from expressing genuine compassion or indicating a shred of intelligence, there’s nothing the president can say, at this point, that should shock anyone.”

Some Hell is a character-inspired novel whose plot, when one reads recitations of its events, sounds as if it could overwhelm its characters. Accordingly, I find myself avoiding, more than usual, spoilers that might give away the story. The characters hold their own through the book’s many surprises. The writing is compelling, the characters heartbreakingly believable, and, although their circumstances can sound astonishing when described out of context, they are very much like the circumstances that have challenged, tempered, hardened, and sustained me and people I love.

“Coming-of-age novel,” the label generally being applied to the book in publicity materials and press reports, unfortunately will constrain readers’ expectations. Yes, Some Hell tells the story of an American middle-schooler. His name is Colin, and when we encounter him he is dealing with the universal pains of adolescence. He experiences familiar hardships including a crush on his best friend, sibling adversities, and a less-than-nurturing school environment. But many of Colin’s challenges are far from predictable, and his ways of dealing with those challenges even less so. He is a boy with a rich interior life, and the novel is driven by his growing alertness to the worlds around him and within him. His age places him squarely in Young Adult fiction territory, but the widely acknowledged if unwritten rules of that genre—particularly those governing explicit sex, underage sex, and kinky sex—disqualify him. Some Hell declines to conform to the rules of any established literary category.

Wisely, Nathan chose to give us a close view of Colin without writing in first person. We do not watch the world exclusively from Colin’s point of view; his mother, Diane, also maintains an active interior life to which we have access. When we are inside Colin’s head, we are not trapped with pubescent cynicism or petulance. We find room to understand, particularly when he does not, the difference between his posturing and his yearnings. His fantasies animate him even as he recognizes that he is using them to fuel denial: he approaches a pathologically isolated family member and we learn that for Colin, “It was easy to pretend he was rescuing stolen plans or launch code, and he slunk along the wall to avoid unseen trip wires. You couldn’t sneak up on the evil anarchist by strolling out in the open.”

Shifts in point of view can be jarring in the hands of an awkward novice. Nathan is skillful and very conscious of what he is doing when he concludes a chapter in Colin’s point of view with the single paragraph: “She could protect him.” The following chapter’s opening paragraph, “She couldn’t protect him,” launches a dark passage in Diane’s point of view. When Colin’s and Diane’s perspectives intersect, we read episodes that reveal the complexity of their relationship: “Why hadn’t he understood, until now, that when she waltzed around the house, reached for things like a ballet dancer, sang half of what she said, and closed her eyes with each deep breath, his mother was at her most depressed?”

Colin watches himself, sometimes with great skepticism, and learns more than he wants to know. Probably his greatest lesson is the universal one that each of us must learn from personal experience: that hell is our own creation. Like most of us, Colin tries to believe the surrounding culture’s platitudes about self-knowledge being a tool of growth and a step toward actualization, or at least a pivot away from despair. But the more intimately Colin comes to know himself, the more excruciating the torment he can customize for himself. Without asking us to suspend disbelief, Nathan has made bold decisions that push Colin’s hell to the borders of magical realism.

Nathan writes beautifully, without sentimentality. When we think a maudlin moment may have arrived, he yanks our chain: “His prayers sounded like questions, lilting up at the end as though God might simply pat him on the head. There was too much to worry about, his worry itself a growing thing—an infected organ inflamed and toxic.”

Notably absent from the book is any attempt to entertain the reader with humor. If we laugh, we laugh with wry recognition. Diane visits a therapist who is comically out of his depth—while she speaks of profound trauma, he compulsively clicks a pen, which he hovers over a note pad, and makes awkward, inappropriate jokes. “Just put down the fucking pen and listen to me, she wanted to say.” But she returns for follow-up sessions and laughs at herself for feeling that an ineffectual rookie therapist is just about right for her. Her son recalls a compassionate gesture from a schoolmate and we read, “Colin remembered her eyes, how they darted away and came back to him like fish hovering around a hook.” The image is funny in a jarring way, but many readers will remember agonizing during adolescence—With these feelings toward other people, am I a predator?—and relate to the inability of a person asking such questions to accept comfort.

Nathan introduces the effects of private, internal catastrophe with a detailed account of the devastation caused by a 1960 Chilean earthquake—still the most powerful seismic event ever recorded. This unsettling image would make its point even if it appeared as a random reference to generic cataclysm. But in his painstaking way, Nathan soon lets us know that one of Colin’s enduring memories, from his kindergarten days, is of televised images of the 2004 Indian Ocean tsunami that killed over 230,000 people in fourteen countries. The boy studies earthquakes to better understand the inner turmoil he deals with each day. In his magically realistic style, Nathan returns to the theme long after the reader has set it aside it as a dramatic metaphor.

More clearly than anything else I have encountered, Some Hell shows a person growing into the eroticized experience of punishment, fear, humiliation, and even pain. In Justine and One Hundred Twenty Days of Sodom, the foundation texts of S&M, which fell into my lap when I was about Colin’s age, the Marquis de Sade wrote entirely from the point of view of the dom. He never revealed what’s in it for the sub, except the gratification of knowing that the dom has been satisfied. At 15, I shelved this among the many mysteries that would reconcile themselves to my understanding as I grew older. When I re-read de Sade a few decades later, the mystery remained intact. Edmund White, in his 2006 memoir My Lives, plunged into this territory in 356 overwhelmingly explicit pages. Nathan takes us deeply into this private space, credibly and with empathy, and weaves the essentials into a few well-placed, to-the-point paragraphs—“…stories on the Internet that could waste an afternoon. What boys were for, he was learning from these stories: kidnapping, controlling, shaming, binding, tormenting, enslaving, and, in the end, rewarding.”

By the way, in case it’s not too late, please do not read anything about Some Hell outside of this review—not even the liner notes! The tagline on the publisher’s website promises “A wrenching and layered debut novel about a [spoiler] teen’s coming of age in the aftermath of [enormous spoiler.]” For me, this kind of advance material made reading the book’s early chapters difficult; instead of settling in with the narrator’s voice and becoming acquainted with the characters, I found myself waiting for a very specific, very big event.

Once I had encountered that event, I went back and re-started the book at page one. This constitutes high praise from a reader who often claims, “I’m kind of done with fiction.”

2020 Writers Retreat for Emerging LGBTQ Voices Applications due February 7
RJ Gibson, "Poem With Bodies In It"
Eric Joonho, "My Banker"