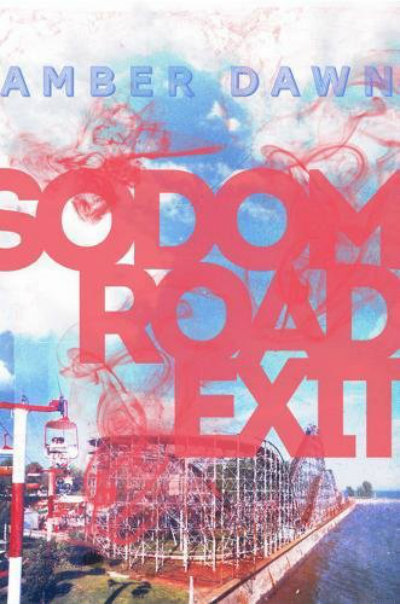 Starla Martin, the sardonic narrator of Amber Dawn’s second novel, Sodom Road Exit, is a twenty-something college dropout with a penchant for pricey art, designer clothes, and one-night stands. When her mounting debt finally catches up with her, she’s forced to leave Toronto, where she’s been living the high life on credit, and return to her childhood home in Crystal Beach, once “hailed as the ‘Coney Island of the North,’” now gone to seed after the shuttering of the local amusement park.

Old family wounds emerge the moment the prodigal daughter steps foot into her mother’s cottage, but quickly Starla discovers that her strained relationship with Barbara is the least of her concerns. Unpacking a stunt, impulsively purchased at auction by Barbara as a surprise gift, Starla unwittingly unleashes a restless soul: “Something that tugs my stomach and weights my head, not unlike how suicidal urges push and pull.” Thus begins her haunting. But she’s not the only one affected by the seductive, dangerous spirit. As Starla re-inhabits her hometown—getting a job, running into an old friend who quickly turns into a new flame, exploring the abandoned amusement park—she gathers around her a motley crew of locals, each ensnared in their own lives’ hardships, most seeking salvation from an otherworldly force.

As a narrator, Starla is sassy, weird, and a bit of a cultural know-it-all (she references all the hip books, has been to all the cool-kid shows, spends a chapter explaining who Barbara Kruger is to her mother). She’s wired for conflict from the get-go, having let childhood trauma fester and possessing a strong disdain for almost everyone she comes across; she’s the perfect foil for the ghost because she’s already odd—and like the ghost, she’s queer, a fact she at turns flaunts and hides. At times, especially in regard to her antagonism toward her mother and her reckless self-righteousness, Starla comes off as bratty. Push beyond the entitled demeanor, though, and you’ll discover a grieving woman who just wants to be loved. Again, not unlike the ghost who haunts her.

Starla’s narration is occasionally interspersed with dispatches from the ghost herself—a female trapeze artist from the town’s heyday named Etta, who died after being flung from the amusement park’s rollercoaster. Etta’s voice is at once creepy and beguiling: “This girl here is my Venus in a clamshell, my kewpie doll. My naked angel singing on a cloud of our shared melancholy. Hot damn, I’m a poet and I didn’t know it. Starla, she calls herself. That’s poetry too. I’ll still call her Dollface.” But a possessiveness like this only spells trouble as Etta gains power and physicality from her liaisons with Starla, and the community at large becomes convinced the dangerous Etta is an angel.

One of Sodom Road Exit’s best features is its unabashed, in your face, smart rendering of female sexualities: the women of Sodom Road Exit don’t exactly own their bodies, but they wield them—clumsily, messily, noisily, sexily. There is also a certain amount of anger fueling this story; it’s especially obvious in Starla and Etta, but every woman here wears the emotion—deservedly, and like a badge of honor.

At times, though, Sodom Road Exit feels rushed, like it wants to go deeper but can’t quite take the plunge. It’s not that the book isn’t daring, because it is. What it lacks is a certain sense of richness, which would propel it beyond its racing plot and occasional outrageousness and into territory that might yield up a more complete sense of healing. That said, the exuberance and energy of the book, and its cast of diverse and compelling characters, really help drive the book.

Sodom Road Exit is billed as a paranormal thriller, and while it doesn’t exactly contain the tension or mystery needed to meet that description, it is a fresh and unusual story that encompasses both the dark and the hilarious. Starla is a narrator who can’t quite decide if she wants to be sympathetic or not—and that makes her all the more real. Even if you don’t really like her, you root for her, and for her friends and family, and for the abandoned town they all love. If you’re jonesing for a dose of early 90s, Gen-X ennui, with a side of the supernatural, Sodom Road Exit is worth the price of admission.

'In Full Velvet' by Jenny Johnson
Read Jewelle Gomez's New Foreword for 'The Gilda Stories: Expanded 25th Anniversary Edition'
'They Could No Longer Contain Themselves: A Collection of Five Flash Chapbooks' by Elizabeth J. Col...