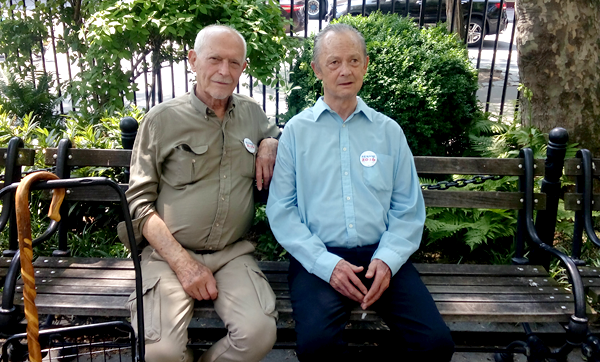 Writer and New York City artist community member Neil Derrick has died. The cause of death has not been released.

A longtime Greenwich Village resident, Neil Derrick was born in 1931 and grew up in California. After one semester of graduate school at Berkeley and a stint in the Army, in 1956, he moved to New York City to pursue a career as a writer.

He obtained a position at the Museum of Modern Art and there he met poet Edward Field, who was to become his partner of 58 years; the couple co-authored various writing projects. As Field later remembered: “I was working in the typing pool of an advertising agency, and the supervisor assigned the typewriter next to me to a new temp, a terrific-looking young man from California named Neil Derrick. It was a case of immediate attraction between WASP and Jew.”

Field suggested that Derrick submit his writings to a pornographic publishing company, which paid a $1,500 flat fee for books. The first piece Derrick submitted was accepted and published under the title Up and Coming in 1969. It was followed by Sticky Fingers, about a young woman who was the mistress to the President of the United States.

As Bruce Elliot, Derrick published The Potency Clinic and The Office. With Edward Field, he co-wrote the bestselling novel The Villagers in 1980.

Since 1972, Field and Derrick were artists in residence at Westbeth Artists Community. Together since 1959, “with a two-year hiatus when we broke up, and then we straightened out our heads” according to Field, they were a familiar sight in Greenwich Village, walking side by side. Derrick, who was blind since 1971, always kept his hand on Field’s shoulder.