Performer Taylor Mac sat down with the Los Angeles Times to discuss gay history and his 24-hour performance extravaganza.

The artist’s producing team at Pomegranate Arts requested through CAP’s press representative that gender-specific pronouns be avoided, but Mac seemed more fatigued than fazed when I asked whether there was a difference between Taylor Mac the stage creation and Taylor Mac the white, gay man tucking into a steak before me.

“There is a difference,” Mac said. “Right now, I’m wearing relative man drag. I’m trying to blend in. On stage, I have a responsibility to expose the inner workings. So I say my gender isn’t male or female. My gender is performer and my gender pronoun is ‘judy’ because I wanted a gender pronoun that is an art piece, that makes people pause and consider and laugh because everyone is so uptight about getting it right.”

The finalists for the Publishing Triangle Awards have been announced! Check out the nominees here.

To celebrate the release of his new book, The Sparsholt Affair, The New York Times Magazine conducted an interview with beloved English author Alan Hollinghurst.

Have then/them pronouns been throwing you off? Archie Bongiovanni and Tristin Jimerson have made a great comic to help you out: 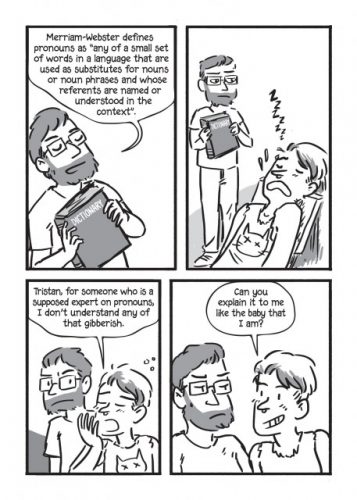 When asked what books she would take with her to the proverbial desert island, Roxane Gay provided these ten choices.

Writer Robert Reid-Pharr asks “Do queers ever grow old?” Reid-Pharr explores Brontez Purnell‘s books through the lens of ageing in the queer community.

The movie Love Simon, based on the book Simon vs. the Homo Sapiens Agenda, was released this weekend. Have you seen it yet?

The late photographer Bill Cunningham’s memoir is being released this fall.