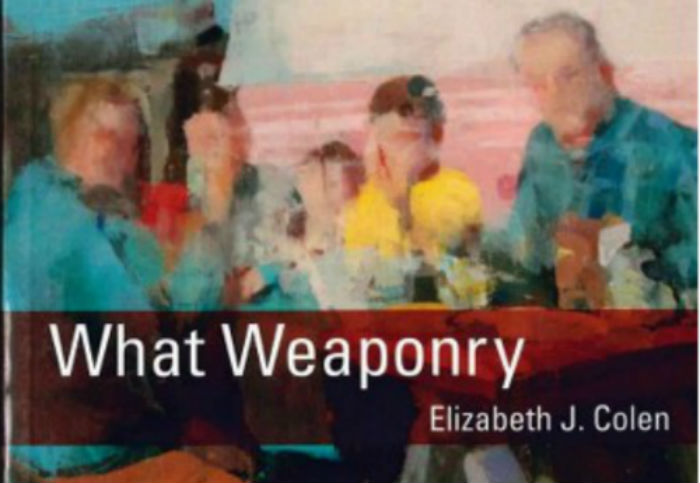 I read once about a fascinating technique that was employed in the film industries in the 80s and 90s. To create stormy skies, props masters injected black ink into water, and filmed it spreading out and out, recording the reach of it and then using the footage as backdrop for a scene. The result is perfect. You’d never know (unless you already had insider information of some sort) that it was manufactured.

This is the concept that came to mind while reading Elizabeth J. Colen’s exceptional prose-poem novel, What Weaponry. In “Breadfruit”, she writes: “and the time we tried to make love in the back of the truck, which had filled partly with dropped plums, overripe and messy. Juice stained our skin and our clothes. We looked butchered.” The poem starts with an image of a cat trapped by (seemingly harmless, though taunting) dogs, then a tense conversation between lovers, then this image, then the cat mewling up again.

The reason the effect of ink in water came to mind isn’t because I think Colen is tricking us (the readers) into something theatrical and artificial. Rather, it’s the fact that once she lays an image down (and she lays images down one at a time, like celluloids or tracing paper), it’s impossible to un-see or un-know it. And—the most remarkable of all— the truths she constructs are far more nuanced and intuitive to the human condition.

The images and narrative exist in real time. They don’t, as poetry sometimes can, exist in an inaccessible, esoteric space only for academics. Colen’s novel of poems clearly shows (without stating) the landscapes of American sparseness (Kansas), juxtaposed with the landscape of American lushness (Washington):

I love you when—you told me not to talk that way. We went down to the 76 to buy some cigarettes; Ralph’s was cheaper, Camels on sale, but the road was so wide, four lanes, five lanes, six at the light.

This book has managed to earn its rightful place among other brilliantly-crafted prose-poem novels (like Anne Carson’s Short Talks, or Claudia Rankine’s Don’t Let Me Be Lonely), giving a voice to complicated narratives that manage to be both fragmented and complete. This book is a resounding victory.