Read This! An Excerpt From Patrick Nathan’s ‘Some Hell’

Read This! An Excerpt From Patrick Nathan’s ‘Some Hell’ 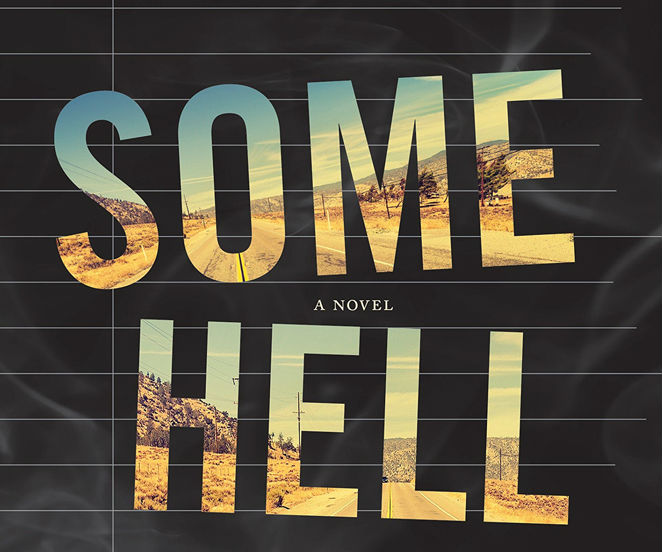 This month, Graywolf Press is releasing Some Hell, a new novel about familial strife from author Patrick Nathan.

Author Garth Greenwell states, “There’s nothing metaphysical about the hell Patrick Nathan takes us to in this brave and harrowing novel. It’s the hell we make for one another, out of silence and grief and desire, a hell whose necessary precondition is love.”

Middle school hasn’t been going well for Colin. His teenage sister teases him mercilessly, his autistic brother lashes out at him, and he has a crush on his best friend, Andy. But after the tragic night when his father commits suicide, none of that matters. Diane, his mother, seeks solace in therapy. Colin is awash in guilt, and casts about for someone to confide in: first his estranged grandfather, then a predatory science teacher. But nothing helps as much as the strange writing his father kept in a series of notebooks locked in his study. Colin looks for answers there—in fragments about disaster scenarios, the violence of snow, mustangs running wild in the west—but instead finds the writing infecting his worldview. Diane, meanwhile, has a miserable fling with a coworker, and leans more heavily on Colin for support as things go from bad to worse. But spring is unfolding, and a road trip to Los Angeles gives them a tantalizing glimpse of what the future might hold

Patrick Nathan’s short fiction and essays have appeared in Gulf Coast, Boulevard, the Los Angeles Review of Books, and elsewhere. This is his first novel. He lives in Minneapolis.

Diane sighed as she looked over the waiting room. Even the sign above the reception desk—Jacobson Family Therapy—was sans serif and without color. It was hard not to answer sarcastically as she filled out the insurance forms, signed the privacy policy, put an x adjacent to Struggling With The Loss Of A Loved One. She returned the clipboard and smoothed the wrinkles out of her vest. Against what, she wanted to know, was she supposed to be struggling?

In the beginning, she thought she could handle it. Winter had helped, settling in soon after his death. Winter even found its way into their house, the snow quieting not only the yard and the street but also the living room, where she slept, and the bedrooms at the other end of the house. Colin did well in school. Heather did poorly. Paul rocked when the teachers spoke to him. It was as if nothing had changed, especially when you imagined that Alan had simply banished himself downstairs, back to writing more nonsense in those notebooks.

When Jack London first saw snow, he wrote that “one could not survive it.” Born in California in 1876, on a warm January day, he began traveling when he was sixteen. First to Japan, on the schooner Sophie Sutherland, and— in July of 1897— to the Canadian Yukon. Like tens of thousands of other would- be prospectors, he did not arrive until the summer of 1898, malnourished and stricken with scurvy. He likened snow to a “silent assassin” that could “slit a man’s throat.” Since she’d read this, scrawled in Alan’s hand, flat on his desk as she waited for the police, Diane had welcomed snow in all forms. It was silencing. You could hear it hush the neighborhood, even the traffic on Lexington Avenue a few blocks away, like it’d come from behind and put its hand over the city’s mouth. Alan had written this between a list called “Curious Parasitoids” and a quote copied out from the New York Times: “Louise McPherson, head of the department of entomology at the University of Illinois at Urbana- Champaign and a participant in the study, said that examination of dead bees had found residues of more than 100 chemicals, insecticides and pesticides.” Alone with his remains, she couldn’t decide if her husband was a genius or a madman. She kicked his leg and called him a fucking idiot, and she kicked him again until it no longer felt like kicking a person, someone who might kick back. It was just an object on the floor.

His office was how he’d left it. The gun was now emptied of bullets and returned to the bottom drawer, against the investigator’s advice, against her mother’s wishes, against her own sense of self- preservation. But she would never go that far. She knew that the moment she found him. Standing over his body, she’d looked into the future to see if she too could end her life. Instead, the future conceded to Heather and Colin, standing just outside, and Paul somewhere upstairs making a noise she’d never heard. She left the gun in his hand and waited for the police. He’s gone, she wanted to say when she let them in— or, Help him—but she only shook her head.

Almost every night she went to bed early, carrying her pillow and her blanket to the couch. It was snow, or the thought of snow, that kept her asleep until morning, even when it wasn’t falling. It wasn’t until spring came, quickly with a week of forty degree rainy days, that she began to worry. She’d always loved spring and its morning thunderstorms, its birds you heard on the way to work. Even though she’d given up gardening for motherhood, she loved spying on the neighbors in their flowerbeds, wiping their gloves on old jeans, cradling geraniums or snapdragons like infant animals as they untangled their braided roots. But that spring, watching them trade spades or boxes of growth hormones, putting words to their silent bickering— she felt cheated. She no longer slept through the night.

As they approached summer she still woke up sobbing three nights a week. Against the May sunshine and evening warmth, her grief was suddenly abnormal, and her friend Shannon came armed with the name of a therapist.

“What can a therapist say that you can’t?” Diane asked, moving her mug in a gentle circle to watch the coffee inside try to catch up. They had brewed their usual Sunday- night decaf and sat with the windows open.

“You’d be surprised at what they come up with,” Shannon said. “When me and Frank were fighting a few years ago— nonstop, you remember—we tried it out. It wasn’t like he knew something we didn’t, but without him it might not’ve worked. They’re just good listeners.”

She tried to be patient as Shannon listed on her fingers what was left of Diane’s life as though symptoms of a common infection.

“You haven’t stopped smoking,” she said after Colin came into the room to light her cigarette. “You’re spending how much a week on this? Without your husband’s income?” Diane rubbed her hand on Colin’s shoulder as he slipped the lighter back into his pocket, hoping he wasn’t ashamed for supporting his mother’s habit. But he wasn’t ashamed. She could tell by the way he raced to find her, every time she called to him, and even when she didn’t—even when the crinkling cellophane was enough.

“You’re still sleeping on the couch. It’s been— ” Shannon looked down at her coffee. It was clear she knew how a word like months could be offensive, just like weeks. Right then, Diane felt like years would be offensive, or decades. A lifetime. “I don’t know,” Shannon said. She took a sip of her coffee. “Are you still missing a lot of work?”

It was hard to get people like Shannon to understand. Diane would talk about things like the kids, her job at the plant, how the car took three turns to start on a cold morning, her trays of makeup in the bedroom. These were things that hadn’t changed. Everything, except one thing, had stayed the same. “That’s the cruelest thing of all,” she’d tried to tell Shannon. “Talk about God’s mysteries.” Even now, on the way to therapy that very afternoon, she had the wind knocked out of her by the sight of a maroon Oldsmobile with rings of rust around the wheel wells. In high school she’d suffered anxiety attacks; a grief attack wasn’t all that different. Her vision glossed over and she missed her exit, one hand on the wheel as she dug through the glove compartment for a napkin. By the time she turned around and got back on the freeway everything around her looked strange, as if she’d never been there before, and she was no longer bound by love.