‘The Prince and the Dressmaker’ by Jen Wang

‘The Prince and the Dressmaker’ by Jen Wang 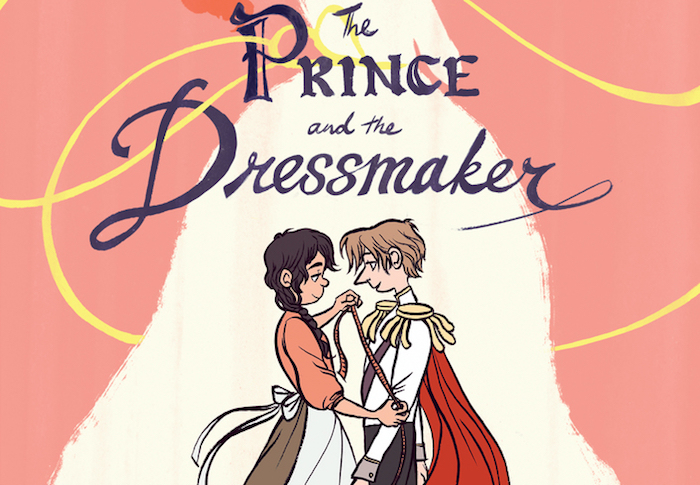 The jacket blurb for The Prince and the Dressmaker describes it as a “fairytale for any age,” set in “Paris, at the dawn of the modern age.” Welcome to the Belle Époque, the late 19th century Paris of Jane Avril, Toulouse Lautrec, the Eiffel Tower, trains and bicycles, Arthur Rimbaud and Puccini’s opera La Bohème—a time when industrialism was quickly modernizing both ways of life and ways of thinking.

Our story opens in true fairytale fashion, with the announcement of a spring ball hosted by Prince Sebastian. His parents are invested in maintaining the royal lineage; the prince has just turned sixteen and they want him to find a bride. But the prince has a secret: he likes to wear dresses. Lucky for him, he finds the perfect dressmaker instead.

Frances has longed to be a fashion designer ever since she first visited the city and was awed by a poster for the ballet “The Muse of Crystallia,” with costumes designed by Lady Aurelia. Working as a minion to a dress designer, Frances creates a cutting edge dress for the young Lady Sophia Rohan. Lady Sophia is pleased, but her parents are not, and the dressmaker chides Frances by saying,

Still, the dress draws the attention of a mysterious client, who wants to both wear her dresses and pay for them. When Frances trips and falls, her hand accidently brushes away the enigmatic guest’s veil, and she discovers Milady is the Prince. Although initially shocked, Francis and the Prince realize they can be mutually advantageous to each other. Francis creates elegant, nouveau gowns for Lady Crystallia (the Prince’s female persona); the Prince pays her and gives her the opportunity to design instead of just stitch.

The two become tight friends, bonding on secret excursions out with Prince in drag and Frances as his dressmaker. Peter Trippley, whose father is soon to open the big new Trippley’s Department store, befriends them without knowing their secret.

But you can’t be a fashionista without getting noticed. Lady Crystillia takes Paris by storm. All the ladies covet her dresses and her beauty captivates the gentlemen.

Frances is angry and hurt at this failed opportunity of a lifetime. What started as a fun, shared secret now controls their lives and has ruined their friendship. Frances tells Sebastian: “You’re a secret, which means I’m a secret! Maybe you can spend the rest of your life living like this, but I can’t!”

Wang’s lovable story and talented, friendly art are a great match for young readers of graphic novels like Raina Telgemeier’s Drama and Victoria Jamieson’s All’s Faire in Middle School. Fans of boys’ love and the gender switching aspects of manga and anime will find lots to love here too, as will readers into cosplay and drag.

Wang’s book is a rarity among kids’ books, in that it doesn’t try to assign a gender or sexual identity to its young characters, choosing instead to let them define themselves, and allowing them the freedom to both change and grow into their future selves. Instead of a stereotypical straight marriage fairytale ending, it’s a modern fairytale for both 19th and 21st centuries. It’s what living happily ever after is all about.