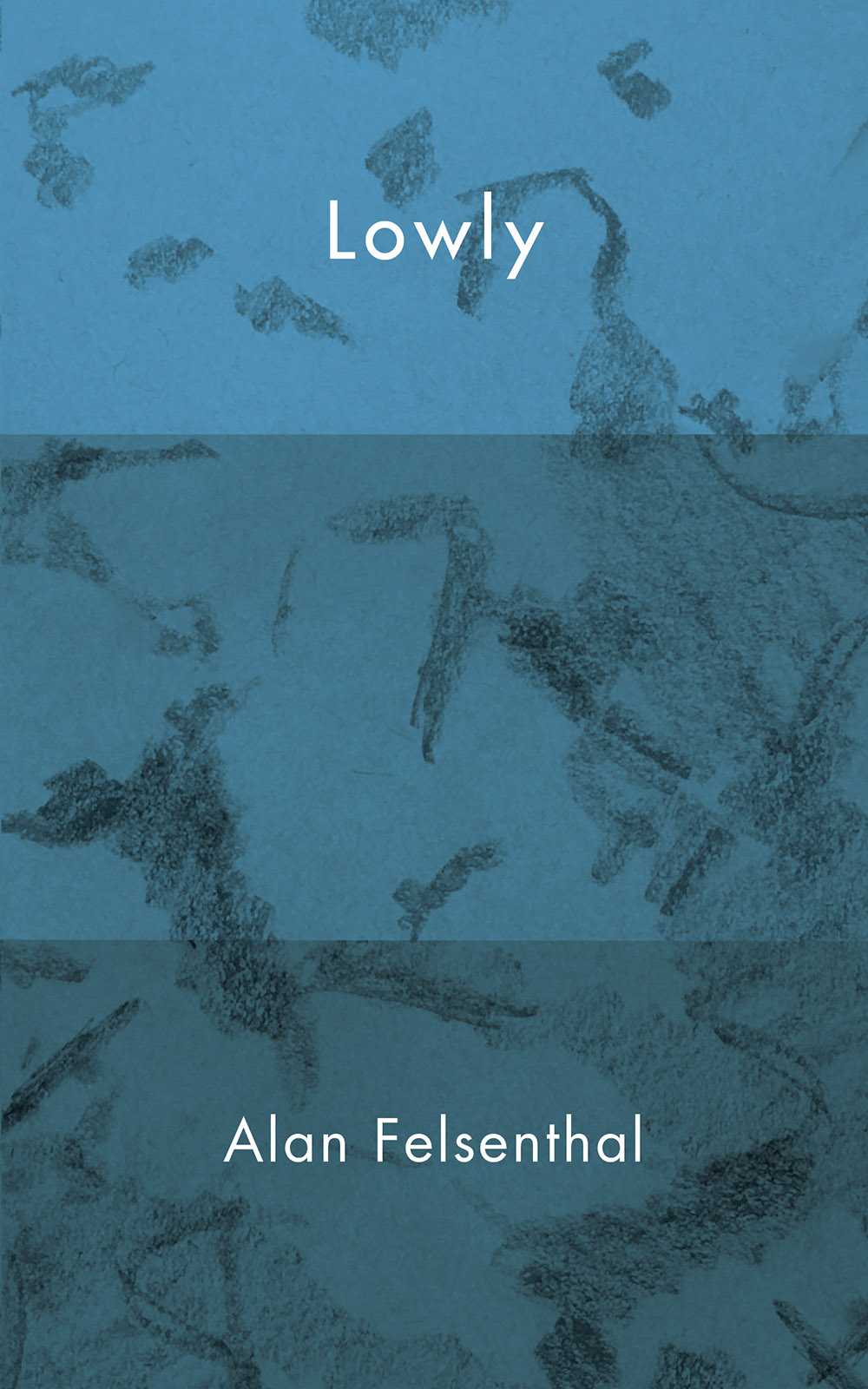 Alan Felsenthal in Lowly shows a strong affinity toward previous generations of Language poets, especially the work of Susan Howe. As the critic Stephen Paul Martin states in regards to Howe: “We are asked to see and hear the shapes and sounds of the words instead of reading through them to what they supposedly refer to.” Felsenthal’s internal rhymes, consonance and general sense of the musicality of the verse line are strongly foregrounded in this collection.

His language draws from philosophy, the Bible, and classical literature to provide ghostings of historical forms such as psalms, Socratic discourses, aphoristic and fabulistic writings and hymns, odes, orations and parables. The poetry is very clean and it is a delight to read the poems aloud for their sheer aural precision and craft.

Case in point is a poem such as “Psalm For Upright Visions.” Here, Felsenthal writes:

___________________________—sing
of the blood that, as it sings, is turning
back to water. I am hardly ever thirsty and
my soul abhors meat, the plant said, here
is all the fruit I can assemble; take, take
the fruit and praise it as though weak
from fasting; lift your head and hearten
for you praise the soul keeping your feet
from falling.

Such elevated language and diction may register oddly with contemporary ears, but Felsenthal masterfully sustains the tone of the poem, which culminates with the lines:

______________The heart’s ambassador
is never too perverse. It goes into the warmth
of the tabernacle to praise a footstool. Make
my soul at ease with my heart’s contempt—
make my soul my heart’s footstool.

Here the poem takes a turn toward the contemporary and shows a certain wit to lead us toward a very ornate metaphorical end. Indeed, Susan Howe, who is quoted at the beginning of the Lowly, says: “we might call Felsenthal a new Metaphysical Poet.” A pronouncement I rather agree with.

The intricacies of Felsenthal’s word patterns are exemplified in a poem such as “Ensue,” which retains a certain gravitas as it plays with eye-rhymes, internal rhymes, and sibilance:

If I ever lie like that, a lid missing,
all dim signs, I give you permission
to retain no impression.

In “Like Someone Once Was” Felsenthal employs a series of aphoristic statements with ingenious and surprising conceits which pack a deep sense of irony. He writes:

A man can be equal to a lyre. His beloved used to play songs.
I know myself as his garment. But I never knew him.

I could not look at things. Out of fear that seeing was a sense
and senses make the world a vortex. The earth seems to
balance without the crutch of air.

This extraordinary juggling of metaphors and philosophic reasoning, while sometimes mysterious, can greatly intrigue the reader. Though some may find Felsenthal too esoteric, there is much humor and surprise in his verse. In perhaps his most accessible poem, “My Domestic Poem,” Felsenthal opens with:

The remedy for your ruminations is bedbugs.
When you acquire bedbugs
you are blessed
for you only have one problem
like when you’re addicted to drugs.

There is an epigrammatic edge to Felsenthal. He gives us a rather arcane logic and wisdom, with oddly disjointed and surprising non-sequiturs. His diction can turn on a dime from the sacred and the elevated to the contemporary every-day, from nymphs and the underworld to the use of the search engine, Google. One statement may jump in a completely different direction. He writes:

The underworld’s unpeopled palace
is colder than I thought, but nothing wretched
belongs there. If nothing is wretched,
thoughts misled me with my permission.
The bedbug is where it belongs, a body
was built to be vanquished. Trust the lovers
of beds and bodies. We hardly know
whom we’ve slept with. Somewhere else
a mosquito survives August by killing
a child who just learned cursive.
They don’t teach cursive anymore.

Though not overtly gay in content, Felsenthal is a queer writer. By his usurping of expectations and norms, logic and dictates he is a trickster at heart. He is a queer John Donne, playing with metaphor like any queer court jester to delight and fool his readers. He is also a poet like Donne and George Herbert of strong spiritual feeling and emotions, at times elegiac, at others moralistic.

Something to Talk About is a Slow-burn Lesbian Romance
A Poem by Jake Byrne
'Mark Dirt' edited by Nicole Katz, Mathew Swenson, and James Brundage with Ramsey McPhillips