Troubling ‘Call Me By Your Name’: Stylized Writing as a Way to Complexity

Troubling ‘Call Me By Your Name’: Stylized Writing as a Way to Complexity 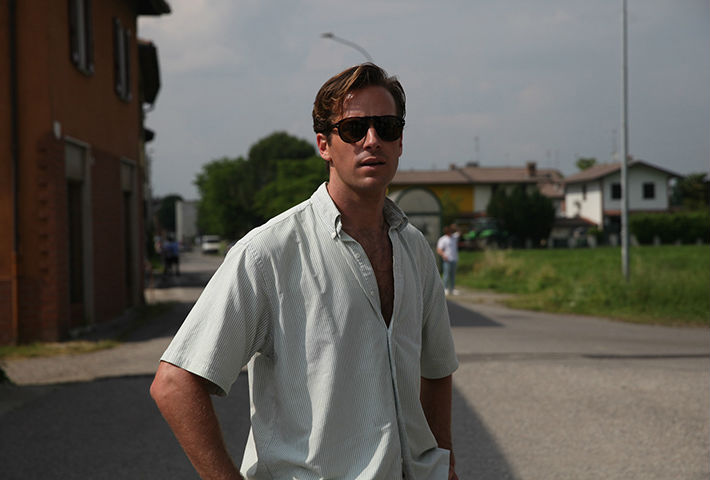 It is not a surprise that award winning director and writer James Ivory–nominated this year for his fourth Oscar, an occasion for the Academy to provide him recognition for his long career–took on the challenge of writing the Call Me by Your Name screenplay, a romance between a young American man and an Europeanized Anglophone teenager in the Italian countryside during the 80s. From Maurice (1987) to The City of Your Final Destination (2009), the passion of Elio and Oliver looks straight from Ivory’s filmography. Nor is it shocking that Ivory’s work would pair so well with director Luca Guadagnino. Given Guadagnino’s previous films (I Am Love, A Bigger Splash) it is clear that he is at his ease with the description of a cosmopolitan and bourgeois milieu and its sentimental interconnections.

But that does not mean the recent adaptation from André Acimman’s novel, appearing on the big screen now, wrote itself. If compared to the novel, Ivory’s screenplay shows several original qualities. He took the well loved if not traditional novel about a long term affair which began as a summer fling and delivered to Guadagnino a deftly crafted script that played with structure and meaning. Together the director and screenwriter have produced a nuanced exploration of two men in love over a single summer in which the machinations of what they did in private are at the subtle heart of the film as the drum of the outside world beats on.

Their most obvious adaptation was to drop the voice-over deployed in the book. Instead, visuals and soundscapes are used to illustrate the passing of a summer spent “somewhere in northern Italy” by a couple discovering their mutual attraction. Similarly, gone is the Grand Tour itinerary of Italy as experienced in the book and in its place is a more intimate panorama of the countryside, and rather than the whole cast of the book making the celluloid leap, Ivory and Guadagnino deleted characters to better concentrate the plot on the tight knit family and their invited guests.

These shifts for the film compliment the soul of the text, and are insights into how the movie navigates the blueprint of the book while also keeping in mind the rules of the melodramatic genre. The lifting of setting and spatial relations from a text to create drama reveal a cinematographic purpose. In the screenplay the slow erotic build between Elio and Oliver is symbolized by a perpetual tension between “above” and “below”, between higher and lower positions in the frame or in physical environments. Elio, still suspicious, observes from a high window the arrival of the blond guest; later, he spies him from the garden into his room on the second floor, after their first sexual approach. In this perspective the desire moves always along the same trajectory, in relation to the place of the desired and desiring “ones.”

Likewise, Elio’s love confession is whispered around a monument to the First World War: while the boys are sharing their sensations, the camera connects the fallen eagle over the base and the victorious soldier on the top of the rocky pedestal. Passion is therefore satisfied through a perpetual ascent (when the two characters leave, all alone, for an excursion they choose the Orobie Alps and the Serio falls); and, following the same movement but in the opposite direction, the discovery of the classic bronze figure in the deep waters of the Garda Lake symbolizes the blossoming of repressed feelings in the codified communication between them (for the first time, during a swim after the discovery, they call each other using their own names).

Ivory and Guadagnino are at their most audacious yet subtle when we focus on the role of books in the film. Looking to key passages from Aciman’s plot, we can see that the screenplay modifies meanings, recontextualizing details to play with and explore relationships between the characters. For example, Stendhal’s novel, Armance (1827), is mentioned in both versions of Call Me by Your Name. Aciman evokes the French book in his second chapter between the scene of the pond and the first night shared by the men. In the book, Oliver–whose name is the Anglicized version of the novel that Stendhal took as a model, Olivier by Hyacinthe Latouche (1826)–says that he ordered a copy of Armance in a bookshop near the villa where they are spending the summer. Elio offers to pick up it and discovers that the bookseller has ordered two copies. He bought them both and he decides to keep one book for himself: so Armance is transformed into a bond between the two lovers, and anticipates their future separation.

In the movie, Oliver holds a pocket-edition of Armance during the breakfast after the first night he spent with Elio; and if we think of the ‘secret’ that is the conceptual center of the French novel, this circumstance assumes a significant weight. In the book, Stendhal’s hero is an “Olivier,” as the author defines him in a letter to Prosper Merimée written on the 23rd December 1826; he is an “impotens,” as Stendhal specifies in a different message to Sutton-Sharp the 23rd March 1828. The use of a Latin word, which Stendhal uses not only for a purpose of politeness, also unveils a double meaning. The hero of the book, Octave, is described by Stendhal as an “impotent,” from both the point of view of his temper (he is a man without any self-control) and of his sexual impuissance. Therefore, the presence of Armance in the movie can be considered a counterpoint for the chaste erotic scenes that precede its appearance, throwing a different light on them.

While much has been made of the camera panning to the tree as the pair began to have sex, little has been discussed beyond accusations of prudishness for why. The same, shared love between Elio and Oliver is described by the screenplay according to very different dynamics compared to those told by Aciman. The writer is clear in reserving the active role to Oliver: “his shoulder rubbing my knees,” “he was inside me,” Elio reports. At the same time, Elio underlines, as a consequence of their “mock wrestling position” during the embrace, that Oliver is the one cleaning up the semen from his own body: “Had we made noise? […] I think I might have sobbed even […]. He took his shirt and cleaned me with it,” Elio says. This very precise passage is significantly modified in the movie, urging a deeper reflection. In the corresponding sequence on the screen, the character played by Armie Hammer (Oliver) makes a similar action, but instead of cleaning Elio’s body he wipes his own belly from the sperm while the other is lying near him (Elio dries his own chest, after Oliver).

Breaking with a canonical tradition of homophile educations in literature and cinema, this sequence suggests a more equal relationship of the couple; and it hints that the younger boy could have played also (if not only) the active role in sex: however, in the very coherent structure of the screenplay, this symbolic redistribution of the roles fits the broader profiles of the two characters. During the movie, in two occasions, we witness Oliver’s passionate attention for the sex of Elio (in his room, in the attic) while the only time that Elio goes for Oliver’s penis, the contact is limited. “Just don’t,” Oliver commands. The long sequence dedicated to the sexual act between Elio and a fresh peach suggests a similar dynamic; and also the scene where the boy smells Oliver’s swimming suit on the bed, mocking the position of a coitus, is surprisingly undetermined, opening to different interpretation about the boy’s masturbatory rêveries. At the same time the screenplay reserves to the youngest partner a more audacious part in the love hunting.

Related, the movie pays more attention than the book does to Elio’s relationship with Marzia, a girl in love with him, placing her at his side as a more complementary character. In the film we see he desires her and wishes to meet with her again. More so on the screen than on the page, Elio is rendered as a young man in search of the nature of his own desire, open to possibilities, a queer figure, anti-binary in his approach to sexuality; and, in the context of Elio’s quest, the arrival of Oliver can be interpreted as one to love, a revelation in the boy’s young life not troubled by fears or issues around his own attraction.

Considering this narrative structure, all the cross-references suggested by the movie find a better understanding. Some inspiration could have been taken by Guadagnino from Teorema (1968), the Pier Paolo Pasolini’s masterpiece dedicated to the advent of a beautiful stranger in a rich and cultivated family with its liberating consequences on the passions of each member. Behind the melancholic texture of the images and the numinous atmosphere of the sets it is possible to recognize the lesson of such Italian masters as Valerio Zurlini and Franco Brusati: above all the venetian villa used by Brusati as the set for To Forget Venice (1979), the background for the birth and decline of homosexual desires within a closed community, looks as an “archeological past” for Elio’s exacerbated sensitivity, destined to a higher happiness.

While much discussion of Call Me by Your Name has centered around if it is in fact a gay film, such chatter may miss the forest for the tree (if you will). The whole structure of the movie considers in a very sharp way the peculiar structure of the love shared by Elio and Oliver, analyzing roles and bonds between the couple as much as the shifting nature of their affection; it relates this narration to the universal rules of the melodrama, anchoring the story to a clever application of the tools and canon of the genre. Doing so, Ivory and Guadagnino are able to transform the story of a private passion into a broader parable.

Tommaso Mozzati is a researcher at the University of Perugia (Italy). He writes for the Italian review “Segnocinema” and for “Alias-Il Manifesto.” His work focused on Irene Brin, Pier Paolo Pasolini, Patrice Chéreau and Xavier Beauvois cinematographic production.