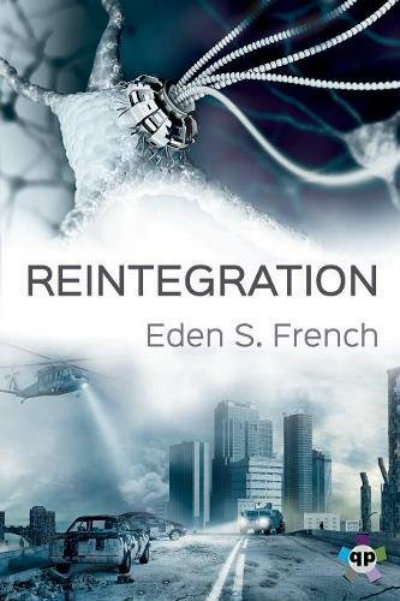 Many generations into the future, things don’t look good. Or maybe they do, if you’re in the right class and believe the right things. In the city Foundation, it all comes down to whether you follow the Code or not. Codists’ lives are orderly, regulated, and plentiful. As long as they abide by the Code—strict rules that ensure social cohesion by prizing the greater good over the rights of the individual—each person has a place in their peaceful society, and those who don’t suffer terrible consequences. Outside of the Codists’ enclaves, life is total anarchy. Gangs fight over their territories, drugs and other sins run rampant, and the Open Hand keeps soup kitchens open, trying to help the most vulnerable in Foundation.

Lexi Vale is a cyborg with the money and status that comes from brokering peace between gangs, ensuring everyone in Foundation’s underworld can prosper. An implant in her head lets Lexi read minds, giving her a huge edge in her job, in picking up women, or in anything else she’s doing. She’s the only person who’s survived having the chip installed, and when the Codists who created it figure out who she is and what she can do, they send their best hunter to track Lexi down and bring her in.

Despite being a solitary smartass, Lexi manages to get to an Open Hand hideout thanks to Mineko Tamura, a brave Codist who’s beginning to think for herself and warns Lexi, as well as a handful of Lexi’s old friends and acquaintances who join her in an unlikely party. Now Lexi and her group—including new friends from the Open Hand—just have to stay one step ahead of the hunter while they figure out what to do next.

Reintegration is many things at once—beautiful, brilliant, thrilling, and terrifying. The worldbuilding is incredible, making it easy to sink into the book and understand what’s going on without relying on infodumps to guide the reader along. For example, the author lays out Reintegration’s tone and helps us see its setting by opening with:

Music droned beneath her, a sonic lure that held the promise of drinking, dancing, and sex. The crime lord who owned the club below was one of Lexi’s regular associates, and the bouncers never gave her any trouble, even though she caused plenty of it herself.

The distant music coaxed her down a hall plastered with posters from a bygone century: musicians long dead, films banned and burned, world tours to countries that no longer existed. She slinked into the lounge, blinked at the strobing confusion of the dance floor, and caught an incoming high-five.

Lexi squinted to make out the grinning face of the man who’d accosted her. He was a scrawny gangster with bad breath and a stupid nickname Lexi could never remember—the Cobra or the Viper, something dumb like that. “How you doing, Anaconda?”

“Viper. ”The gangster—it was hard to think of him as the Viper, no matter how charitable Lexi might be feeling—scratched his tattooed cheek, his grin already replaced by a peevish frown. “C’mon, you knew that.”

Although we only ever read about what’s happening in Foundation, we know that there are other places in the world, all of them with the same fractured societies. Reintegration is a vision of a future we could easily get to, especially with news reports and Twitter feeds this year making it feel like we’re already living in the prologue of a dystopian novel. It describes a time and place where it’s not safe to be queer and the punishments for being trans or loving someone of the same sex are dire. It shows the future as a time of extremes, with the rich being massively rich, the poor unbelievably poor, and little else in between—with the Codist’s collectivist ideology reigning as the (don’t call it a) religion of the day.

Lexi Vale might be the focal character in this story, but it’s Mineko and Callie Roux, one of the members of Lexi’s group, who best exemplify the extremes of Foundation. Callie is a smuggler, the daughter of a dead junkie who lives in a scrapyard. Despite the grudge she carries because Lexi betrayed her in the past, she’s bubbly, warm, and incredibly caring. Min, on the other hand, grew up in ultimate privilege, the daughter of one of the most powerful families in Foundation. And while she cares deeply about protecting Lexi and all of the ramifications that come with that, she’s also razor sharp and has the anger that comes with her full awareness of the lies that Codism causes people to accept. By all rights, Min and Callie shouldn’t get along, and yet they do, showing how difference doesn’t always have to mean staying on your own side of the enclave wall.

Even if post-apocalyptic sci fi isn’t your usual thing, you may still want to give Reintegration a chance. The writing and worldbuilding is so impressive that it’s worth checking out just for that, plus it offers excellent character work across a wide span of characters. It’s also beautifully and unabashedly queer, with excellent gay, lesbian, trans, and nonbinary representation, delivering characters who fight to be themselves in a world where they aren’t welcome. Eden S. French is a magnificent storyteller and I hope she takes us back to this world soon, and many more times after that in the years to come.