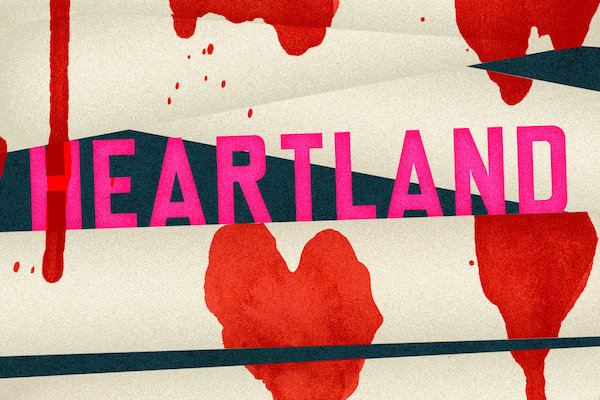 In a word-drunk romp through an alternate, pre-apocalyptic United States, Ana Simo’s fiction debut, Heartland, is the uproarious story of a thwarted writer’s elaborate revenge on the woman who stole her lover, blending elements of telenovela, pulp noir, and dystopian satire.

“Alice is about to ace this whole dating thing,” or so she hopes in Claire Kann’s debut Let’s Talk About Love (Swoon Reads): 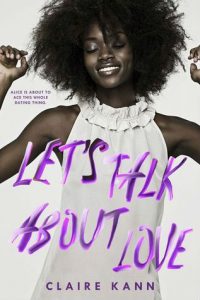 Alice had her whole summer planned. Non-stop all-you-can-eat buffets while marathoning her favorite TV shows (best friends totally included) with the smallest dash of adulting—working at the library to pay her share of the rent. The only thing missing from her plan? Her girlfriend (who ended things when Alice told her she’s asexual). Alice is done with dating—no thank you, do not pass go, stick a fork in her, done.

But then Alice meets Takumi and she can’t stop thinking about him or the rom com-grade romance feels she did not ask for (uncertainty, butterflies, and swoons, oh my!).

When her blissful summer takes an unexpected turn and Takumi becomes her knight with a shiny library employee badge (close enough), Alice has to decide if she’s willing to risk their friendship for a love that might not be reciprocated—or understood.

In tracking an obsessive relationship that treads the devastating line between dysfunction and abuse, Joseph Osmundson explores how vulnerability, need, and shame echo across a life, and meditates on the complexities, both emotional and ethical, of writing that life. Inside/Out is a beautiful and brave book.

2017 was a pretty great year for poetry and 2018 is off to a great start with the publication of Andrea Gibson’s Take Me With You (Plume):

Andrea Gibson explores themes of love, gender, politics, sexuality, family, and forgiveness with stunning imagery and a fierce willingness to delve into the exploration of what it means to heal and to be different in this strange age. Take Me With You, illustrated throughout with evocative line drawings by Sarah J. Coleman, is small enough to fit in your bag, with messages that are big enough to wake even the sleepiest heart. Divided into three sections (love, the world, and becoming) of one liners, couplets, greatest hits phrases, and longer form poems, it has something for everyone, and will be placed in stockings, lockers, and the hands of anyone who could use its wisdom.

In Wild Is the Wind, Carl Phillips reflects on love as depicted in the jazz standard for which the book is named—love at once restless, reckless, and yet desired for its potential to bring stability. In the process, he pitches estrangement against communion, examines the past as history versus the past as memory, and reflects on the past’s capacity both to teach and to mislead us—also to make us hesitate in the face of love, given the loss and damage that are, often enough, love’s fallout. How “to say no to despair”? How to take perhaps that greatest risk, the risk of believing in what offers no guarantee? These poems that, in their wedding of the philosophical, meditative, and lyric modes, mark a new stage in Phillips’s remarkable work […]

From award-winning author Barrie Jean Borich comes Apocalypse, Darling, a narrative, lyrical exploration of the clash between old and new. Set in the steel mill regions of Chicago and in Northwest Indiana, the story centers on Borich’s return to a decimated landscape for a misbegotten wedding in which her spouse’s father marries his high school sweetheart. The book is a lilting journey into an ill-fated moment, where families attempt to find communion in tense gathering spaces and across their most formative disappointments. Borich tells the story of the industrial heartland that produced the steel that made American cities—while also being one of the most toxic environmental sites in the world.

As concise as a poem and as sweeping as an epic novel, Apocalypse, Darling explores the intersection of American traditional and self-invented social identities and the destruction and regreening of industrial cityscapes.