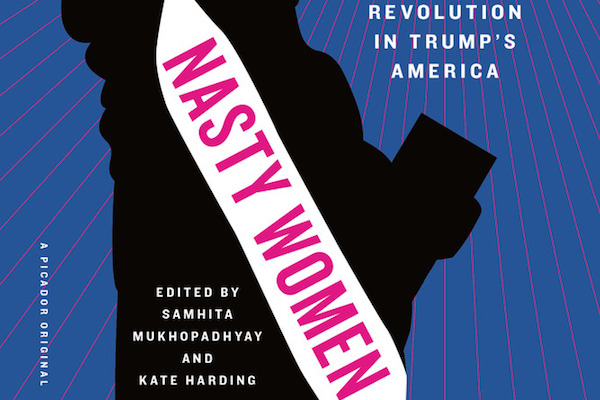 On October 19, 2016, in the third U.S. presidential debate, Hillary Clinton introduced a statement pledging to raise taxes on the wealthy with a jab about Donald Trump’s personal tax evasion.

“Such a nasty woman,” Trump retorted into the mike, and a popular meme and loosely articulated resistance movement was born. Like many on social media, the editors of this collection have adopted this descriptor to encapsulate the range of sites of struggle advocated by the twenty-three female contributors to this volume.

One salient point asserted by this book is that, while all the essayists oppose Donald Trump and his presidency, this group of Nasty Women is not monolithic. Besides big-name white, cisgendered, heterosexual feminist writers like Katha Pollitt, Rebecca Solnit, and Cheryl Strayed, the collection includes lesser known contributors writing from multiple perspectives and addressing a variety of topics. For instance, Sarah Michael Hollenbeck, an owner of Chicago’s legendary feminist bookstore Women and Children First, decries Trump’s treatment of people with disabilities; Jill Filipovic, a lawyer and journalist based in Nairobi, analyzes the effects on Ghana of Trump’s Global Gag Rule that defunds any foreign organization providing information about abortion; and Mary Kathryn Nagle, a Cherokee activist and playwright, places the Trump White House as only the latest in the series of presidential administrations that have systematically oppressed and deracinated Native populations. Adjunct English Professor Melissa Arjona also provides a disturbing account of heavily monitored life in South Texas marked by high-tech aerostats and harassment from vindictive immigration agents.

Another notable feature of this volume is that several essays revise, recapitulate and argue with each other. African American journalist Collier Meyerson’s “Pulling the Wool Over Their Eyes: The Blindness of White Feminists” criticizes the Nasty Women movement’s commodification into T-shirts, buttons and memes by invoking BitchMedia cofounder Andi Zeisler’s derisive label of such phenomena as “Marketplace Feminism.” Several writers are highly critical of the January 21, 2017 Women’s March, affirming trans activist Meredith Talusan’s assertion in “We’ve Always Been Nasty: Why the Feminist Movement Needs Trans Women and Gender-Nonconforming Femmes” that “Now is not the time to be conciliatory.” Similarly, in her provocative analysis “Donald Trump’s War on the Working Class,” writer Sarah Jaffe observes: “in considering what resistance looks like, I would caution against cheering for marches that win hugs from police and frown at a thrown brick.” Yet Black Lives Matter cofounder Alicia Garza, who also identifies as queer, shares her conflicts about participating in the march before concluding, in “How To Build a Movement”: “I decided to challenge myself to be part of something that wasn’t perfect, that wouldn’t articulate the values I did, but that I’d still show up for, clear in my commitment, open and vulnerable to people who were new in their activism.” Garza affirms finally the long-held feminist tenet that coalition building is the most viable avenue of resistance.

As with most collections of this nature, some pieces are more persuasive than others. Nuanced analysis occurs in “Refusing to Numb the Pain,” Sarah Hepola’s account of her personal recovery from alcohol dependency during the Trump era, and Sady Doyle, in “The Pathology of Donald Trump,” argues carefully that the current trend of ascribing mental illness to Trump demonizes the mentally ill and disguises Trump’s very sane but deliberately abusive nature. Kera Bolonik in “Is There Ever a Right Time to Talk to Your Children About Fascism?” recounts being reminded of the Holocaust constantly as a child and thus learning that “hatred never goes away.” Now, as she and her wife Meredith struggle to acclimate their five-year-old black son to Trump’s America, Bolonik speaks for many of us when she reflects on the current political climate: “I’m not shocked that we’ve arrived at this place. For so many communities this has always been America—if you’re black, or Muslim, or Latinx or a woman or LGBTQ.” Yet she concludes that “confronting these bitter truths doesn’t need to wholly define us—because it’s too easy to succumb to despair.” Accordingly Bolonik and Meredith undertake a course of resistance by raising their son in the company of “passionate activists” who regularly attend political actions with him.

I am writing this review the weekend after Donald Trump signed the Republican Tax Bill, a vicious measure depriving millions of citizens of their health care and authorizing drilling into Alaska’s Arctic Wildlife Refuge, as well as perpetrating unconscionable economic crimes against the U.S. middle class, working poor and the otherwise disenfranchised. We need an army of resisters, including a strong contingent of self-identified “Nasty Women” and also those who reject the term but espouse its philosophy, to combat this toxic administration and its leader now more than ever. I am hopeful that reading this anthology will not only inform and provoke us, but also that it will strengthen our collective resolve.