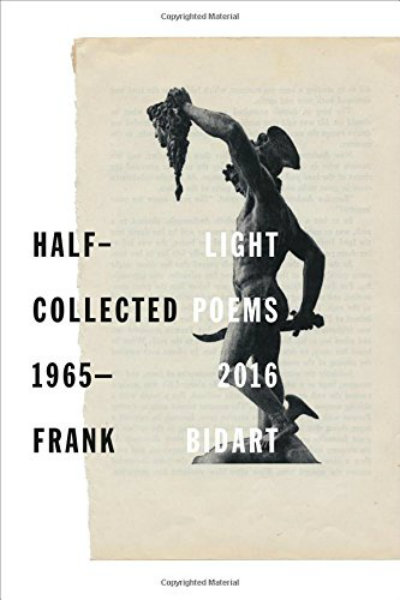 Half-light: Collected Poems 1965-2016, winner of the 2017 National Book Award for Poetry, is a magnificent addition to and compilation of the oeuvre of one of contemporary poetry’s most impressive and compelling voices.

Bidart’s poems have for many years concerned themselves with the perspectives of broken people (serial killers, ballet dancers, movie stars, tragic figures of myth), all worn to nothing by the lives they lived. There seems, so often, to even be a broken version of Bidart presented to us, one he acknowledges in one of the three interviews included in Half-light’s backmatter. In “Another Life,” he writes:

In this monstrous twin the self that is split, the self as half-light. In many ways it is a purely human poetry, obsessed with humans and humanity, the shadow by which whatever light we can produce is recognized.

What makes these broken personae so profound is none of them seek redemption as their ultimate goal. Perhaps some of these speakers are just irredeemable—Herbert White certainly seems like a good candidate for that. Perhaps, though, being irredeemable is not actually a fault; Bidart often seems to be gesturing to brokenness as the most natural state of life, the eternally recurring phase, the most basic arc of the human story. In this way, it is not required for any poem to outline the attainment of wholeness, that greatest lie of narrative. Instead, the universes of these poems and everything in them are recognized as universes for broken people not universes that persist in spite of them.

So if these personae don’t seek redemption, what do they seek? Perhaps it’s the cessation of the main symptom around which this fundamental brokenness always orbits: desire, a concept so central to Bidart it was the title for his 1997 collection. Sometimes erotic on its face, this desire is always, fundamentally, a contradictory striving both for completion and the failure of completion. The problem with desire is it is suicidal; in completing itself it does away with itself. Bidart, and to some extent each of his personae, understands this essential contradiction. Desire feeds itself by saying there is some better, more complete version of oneself that could be redeemed if this or that were achieved. This contradiction is what has led stories and myths throughout human history (frames and narratives Bidart uses regularly) to erroneously assume wholeness or unity of the self as our ultimate goal, when, in fact, it is desire alone which drives us forward and requires us never to achieve that wholeness.

Bidart’s relationship to queerness falls in line with this, queerness being an especially exquisite brokenness, the most beautiful destruction. Bidart has lived in two eras with two unique usages of the word “queer”—one where it was almost exclusively a slur, and one where it has become a badge of honor, a huge category of belonging. Bidart’s queerness bravely bridges these two iterations. He doesn’t shy away from the shame that he feels society and his cultural genesis as a member of an earlier generation foisted upon him. From “Queer:”

For each gay kid whose adolescence

was America in the forties or fifties
the primary, the crucial

But this recognition does not require him to fully divest himself of the public celebration that queerness, as a state of being, as a community, has in recent years allowed so many to experience. Bidart is in select company within the realm of poetry in this respect, joined by the likes of D.A. Powell and Eileen Myles in chronicling a queer culture of an earlier time while remaining observant of and malleable to a new generation with a new cultural relationship to queerness.

If we shift our lexicon a bit, Bidart’s poems are also not confession, though they sometimes gesture toward it; he is not seeking forgiveness or to be told he did nothing wrong. Instead each poem is an exposure of details and associations, the sort of exposure one performs for a psychiatrist—unapologetic, fearing no judgment either because of the listener’s indifference or because one has ceased to care what the listener thinks.

And like a therapist, Bidart is obsessed with memory. These memories can take a shape as small as the way his mother said, “Honey,” or as large and inclusive as the Greek myth of Myrrha, mother of Adonis (who was the result of Myrrha’s seduction of her father). The past manifests as heritage. Heritage as memory. Memory as guilt. Bidart so often seems to be saying that to have a memory is to have regrets, or perhaps that remembering is always a traumatic act. Even when the content of these memories is not overtly traumatic, the act of calling forth the past suddenly rends the speaker into past-self and present-self, and that comparison is always traumatic. This is perhaps best illustrated in his long poem exploring the steady decline of the famed Russian ballet dancer and choreographer Vaslav Nijinsky in “The War of Vaslav Nijinsky.”

Bidart’s steady focus on history often illustrates that the current moment is dependent on a lineage of past moments. So too every thought descends from some past thought, each present image from a history of images, every personal narrative taps into the history of mankind, thus the power of legend, myth, religion, these grand stories we tell ourselves, is not that they tap into universal truths so much as they resonate with the immediacy of each present and unique moment in our separate lives.

This obsession with memory often gets Bidart into conversations within his poems. Between individuals, between past and present, history and now, cause and effect, the self and another iteration of the self. Yes, some dialogue (often with his mother, but also in the discussion between the speaker and the son of a dead friend in “The First Hour of the Night” a poem that acts as the opening salvo in a series that is perhaps Bidart’s magnum opus), but it often breaks down into something less delineated, less hampered by call and response. It is the eternal conversation of things and people and relationships passing in and out of being. It’s the power of these poems that often hold within their syntax a calculating distance that never quite reaches coldness, but certainly feels as if it has let go of some of the searing heat of the moment to allow the speaker and reader to dwell in the specific situation more fully. This syntax is sophisticated and tangled, something that becomes especially clear when one attempts to extract lines from a Bidart poem (say for the purposes of a review), quickly realizing that, even on the scale of a collected works like this, every line and sentence exists within one thread. Sentences pirouette and bend through em-dashes and semicolons for pages, beautifully intricate while avoiding the tendency for such sentences to become fussy or unclear. The poems themselves all ring together across the years through myriad specific and divergent subjects, somehow all feeling as if they are of a single but diverse genus.

In this way Bidart’s poems, based on their content and their form, operate in the mode of conversation. They are lively, lithe. Listen to a conversation happening near you one day. The sentences almost never actually finish; they link up and diverge. Half-light simply seems to be the great notating of the long sentence Bidart has been speaking for years, and I hope he continues to speak for years to come. He seems to be saying to each of us, “Ah, there you are, my friend, broken like me—come, let’s talk about it for a while.”

And these new poems too, collected in Thirst, enter into the focal conversation of contemporary poetry as it is happening now. Bidart questions the great lie of Western, imperialist history: that we are moving forever forward, inevitably progressing toward the utopia our philosophies promise us must come to be. The poems are socially conscious and personally significant. Bidart can still step into the white-hot center of the moment, reflecting the light of others, shining a light of his own.

Half-light is a stunningly vital volume, each poem, whether new or one widely read by many for years, glints and holds its sharpness. Any reader of American poetry will be able to return to this tome, like a well, and, for at least a few moments, find a deep abiding sense of being understood, of not being the only one who is broken.