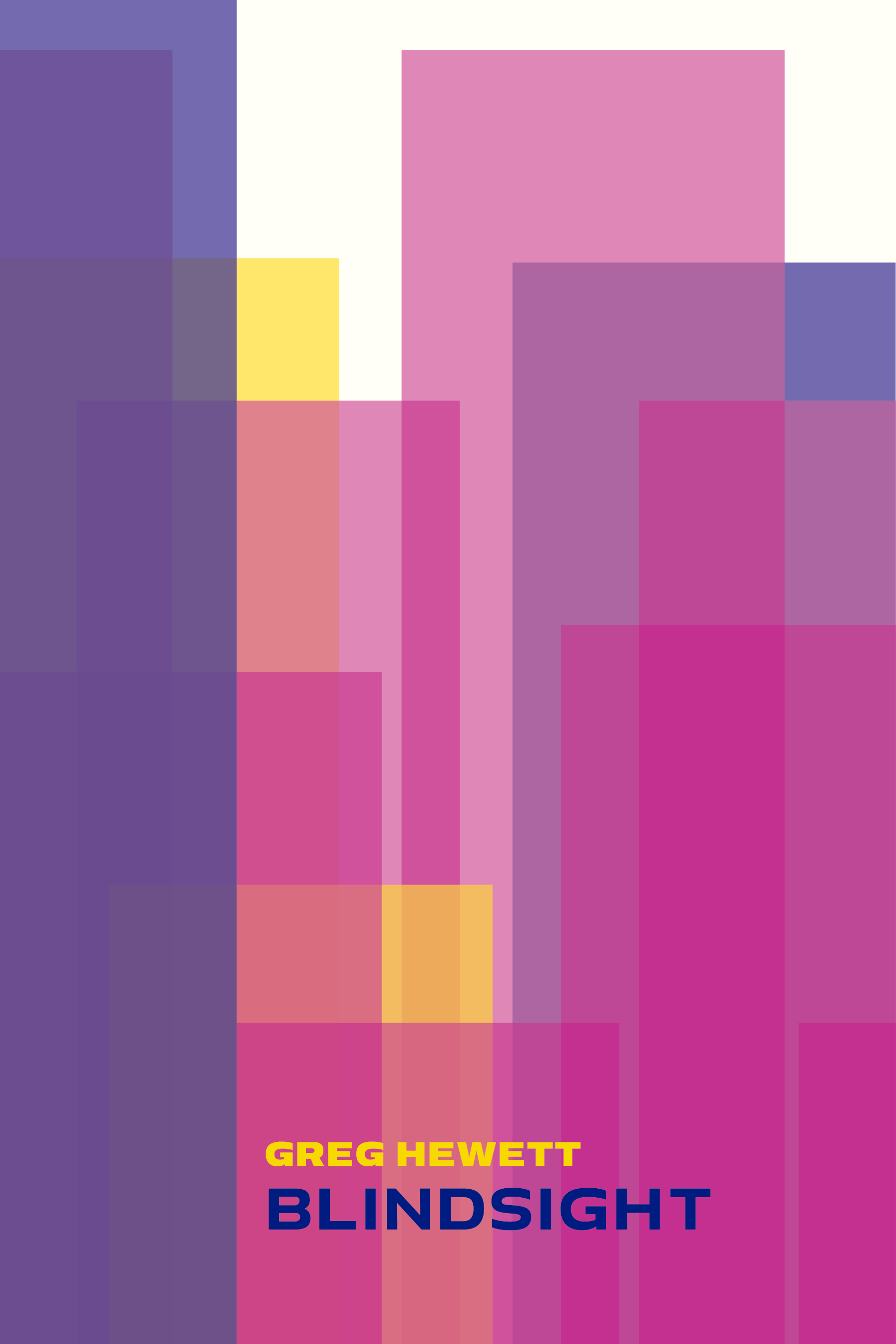 Greg Hewett’s fifth collection engages with memory and sight and the limitations—indeed, fallibility—of each. As he explores his own failing eyesight, the poet seems to distrust “mere” sight, as well as the language we use to describe our seen lives. From the opening poem:

Take blindness as metaphor,
you say, but I say
take metaphor as blindness:
deforming life to get at
the idea behind life
tires me. (“Approaching Blindness”)

The writer spends little time on poems about literal sight, failing or otherwise. “Sight” here is not always through the eyes; instead, as in “Five Moments of Clarity,” a powerful early sequence, alongside poems about eyesight are poems that present, for instance, hearing and language as ways of “seeing.”

I initially took the book’s title to be an amalgam of “blindside” and “hindsight.” But it turns out “blindsight” is a thing: “the ability to respond to visual stimuli without consciously perceiving them,” sometimes caused by certain types of brain damage. Blindsight “challenges the common belief that perceptions must enter consciousness to affect our behavior” (from various Internet sources).

Perception and behavior: What do we do with what (we think) we’ve seen? And whom do we become as a result?

Though not apparent until I reached the Notes at the end of the book, throughout Blindsight Hewett uses prime numbers as a kind of overlay or skeleton: number of stanzas in each poem; lines per stanza; syllables per line. The topic of numbers (primes in particular) appears in only a handful of poems in the first of the book’s five sections, “Number Blind,” for me the most unified section.

It turns out that “Number Blind” (like “blindsight”) is not an invention: Dyscalculia (number blindness) is a learning disability that inhibits a person’s ability to use and have a proper sense of numbers. But the poems in this section do not suffer from that malady; they are clear, precise, and moving in their overt use of math and numbers.

In “Finding My Rhythm,” we see prime numbers in the twenty-nine bones of the spine; in our twenty-three chromosomes; in “the raucous chorus of seventeen- / year locusts.” And in “The Melancholy of Primes”:

Blindsight presents a range of forms, from tightly crafted sonnet-esque poems and others with consistent line lengths to longer, seemingly looser, more conversational poems. The shorter-lined, sonnet-like lyrics are the strongest. The title poem, “Blindsight,” with its 13 lines of 11 syllables each, has one line fewer and one syllable more than (but functions as) a traditional sonnet. The rhythm here is conspicuous, and successfully propels the reader through the poem:

When light lapses from my rooms I find myself
virtually lost. In blindness deep and far,
vision grows visible and the dark world wide. (“Blindsight”)

These concluding lines’ rhythm and tone are reminiscent of Shakespeare’s Sonnet 27, [Weary with toil, I haste me to my bed], especially (Shakespeare’s) lines 8 and 12: “Looking on darkness which the blind do see” and “Makes black night beauteous, and her old face new.” Shakespeare, in his sonnet, uses blindness as metaphor; Hewett, on the other hand, is “looking” at blindness directly, and thereby reveals the limits of sight. These rhythmic and thematic allusions have the effect of deepening the poem’s resonance.

Other instances of the power of the tighter lines contained in this collection: “Instructions for Forgetting,” whose couplets and tercets organize the poem and our reading of it. “Eyewitness,” another near-sonnet, gains intensity from the short line and more concise language.

Elsewhere in the book, line and stanza lengths don’t seem as purposeful because we don’t learn until the Notes about Hewett’s prime number strategy. Here we read that the structure, form, and “rhythm of each line” are derived from “the music and writings of Olivier Messiaen.” I don’t know how this composer puts primes to use, but on the page, syllabics are not the same as meter: the eye needs pattern in order to perceive rhythm. The reader is not, for example, going to “hear” the “rhythm” in an 89-syllable line.

Which is not to say some of the long-lined poems are not successful. The three one-line stanzas in “A Gross Exaggeration,” for instance, function in toto as a prose poem. Each terse stanza of about the same length contains a mother/son scenario that unfolds in satisfying ways; each contains an allusion to another poet, and each of the three ends with the mother figure’s amusing dismissal. So the reader gets repetition that indeed has a rhythmic effect.

The collection as a whole is full of wonderfully quiet musings on vision and memory, cogent observations about longing and loss. Blindsight is at its best in these resonant philosophical moments. From the final poem:

what can’t be seen shows
everywhere,

the bones of vision
everywhere.