‘Any Other Way: How Toronto Got Queer’

‘Any Other Way: How Toronto Got Queer’ 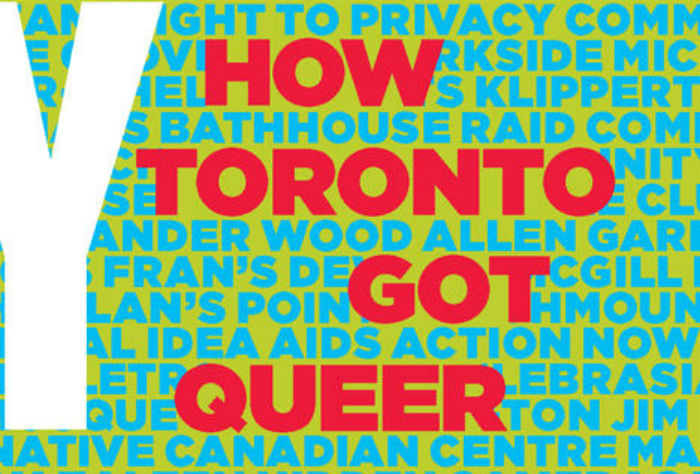 In the early hours of February 5th, 1981, Toronto police stormed four gay bathhouses, arresting hundreds of men as “found-ins” under Canada’s repressive anti-sex work bawdy house law–forcing nude men outside into the snow, wearing only their towels. Inside, the police rampaged through the bathhouses, shouting homophobic slurs and going so far as to kick and punch holes into the flimsy walls that had once been protection for men seeking sex and companionship with other men in Toronto The Good. The following evening, gay activists coordinated a massive protest alongside members of the Jamaican community, who were themselves already fighting back against police targeting of the Black and Caribbean communities in Toronto. “Out of the cold the thousands came,” writes Philip McLeod of this moment in a 1981 letter to friends. Is this the night Toronto got queer?

McLeod’s letter is one possible answer in the extensive new anthology Any Other Way: How Toronto Got Queer, edited by Chambers, Farrow, Fitzgerald, Jackson, Lorinc, McCaskell, Sheffield, Taylor, and Thawer. Any Other Way attempts to answer this question–how Toronto got queer–through dozens upon dozens of essays, news articles, letters, and personal remembrances from a vast array of contributors. These answers range from the individual to the collective, from city planning to public fucking.

Organized by mood–“Arriving,” “Resisting, Sharing, Organizing,” “Sex”–rather than chronologically, Any Other Way charts a history of queerness in Toronto that is like the city itself: wildly diverse, erratic, and often contradictory. What is praised in one essay is sometimes derided in the next. Rather than narrowing the life of this city to a single story of triumph–a narrative device frequently used by LGBT historians, seen most notably in documentaries like How To Survive a Plague—Any Other Way succeeds where so many others have failed by instead providing space for a multiplicity of voices and histories.

The one hundred and four pieces in the book show a remarkable level of diversity on all accounts, and deserve particular praise for the focus on queer and trans of colour histories so often buried or obscured by white queer historians. This erasure of queer and trans BIPOC history is itself discussed in the collectively written article “Marvellous Grounds: QTBIPOC Counter-Archiving against Imperfect Erasure” (Haritaworn, Moussa, Ware, Choi, Panag, and Rodriguez). “Such a queer cartography and historiography reinforces a gay imperialist view of Toronto as a beacon of LGBT rights while positioning queer and trans Black, Indigenous, and people of colour (QTBIPOC) as absent from, or newcomers to, queer spaces and histories,” they write.

Articles charting the founding of groups and events like Blackness Yes!, Lengua Latina, and Desh Pardesh, among others, challenge the dominant white history of queer Toronto. Karen B. K. Chan’s “Uptown/Downtown: Diary of a Hong Kong Dyke in Nineties Toronto” practically begs for novel-length treatment as she writes, with the earnestness only a 22-year-old can muster, of nights spent challenging other dykes to Chinese drinking games and push-ups in karaoke rooms, helping disowned friends move into apartments in the village, and organizing Asian Youth HIV Outreach.

Somewhat confusingly, the editors’ success at capturing the broad heterogeneity of queer Toronto’s voices finds its limit at trans women. Despite framing the book around 1960s Black trans woman singer Jackie Shane, to whose hit single the book owes its title and whose life is the subject of two essays in the collection, Any Other Way doesn’t manage to feature a single out trans woman among its eighty-four contributors. Key events in trans women’s history in Toronto, such as Mirha-Soleil Ross’ Counting Past 2 Festival, merit only a passing mention, buried in a small list of other events, left unexplained and rendered unimportant to the question of how Toronto got queer. Much as the book’s diversity is reflective of Toronto, so too is its erasure of trans women a mirror of queer Toronto’s own long-conflicted relationship with trans women.

Still, in its many strengths, as well as its oversights, Any Other Way comes the closest anyone has come to answering just how Toronto got queer. As Taylor and Thawer write in their conclusion, “In a metropolitan area this diverse, we must make spaces for the intersections of our differences. And confronted with the shifting tectonic plates of identities–Toronto’s and ours–we must also acknowledge the discomfort and creativity arising from this friction.”

Toronto got queer the night three hundred men were arrested by police for having consensual sex in bathhouses in Toronto. But it also got queer on nights spent around the kitchen table of the QPOC collective house on Dewson Street, at the famous Halloween drag balls at the Letros and the St Charles Tavern, when activists got the police’s peeping holes closed up in the cruising bathrooms at the Parkside Tavern, and when Little Jackie Shane stood on stage at the Sapphire Tavern in 1967 and sang, “Tell her that I’m happy, tell her that I’m gay, tell her I wouldn’t have it any other way.”