‘An Unkindness of Ghosts’ by River Solomon

‘An Unkindness of Ghosts’ by River Solomon 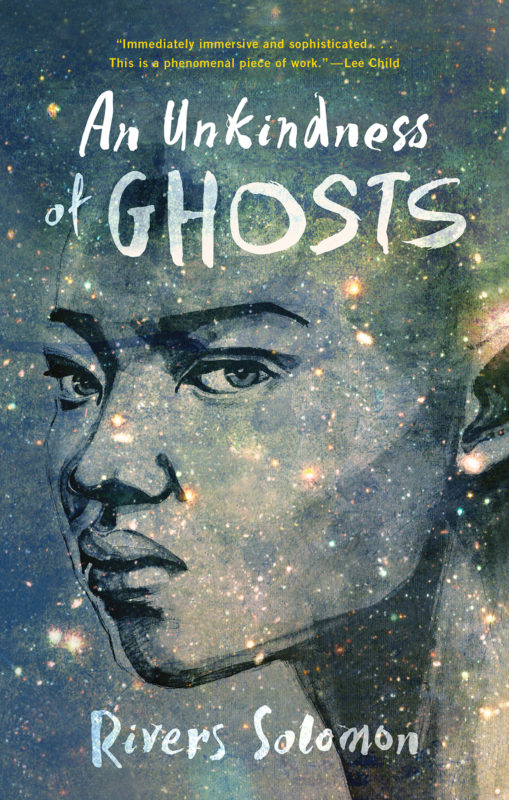 River Solomon’s new speculative fiction novel illuminates a dark corner of our collective past and current reality: slavery’s psychological impact and cultural trauma as its own grueling and coded character. Solomon’s work is the love child of other queer science fiction writers of color whose publications align the historical politics of colonization and the intergenerational mental and metaphysical damages caused by subjection.

Aster, the novel’s black protagonist, is a brutalized passenger on the HSS Matilda, a large spaceship dedicated to moving the last remnants of humanity to a supposititious “Promised Land.” All the dark-skinned passengers on the ship are made to live under the strict and dehumanizing rule of the ship’s leaders, similar to black people living in the United States’ plantation-era South. The challenges faced by Aster, and her community are searingly visceral. Aster soon realizes that she, along with her slave compatriots, must rebel or face a fatally ominous future.

This novel is unapologetically queer and astutely rendered; Solomn’s deft world-building creates an evocative portrait of a childhood bound-up in slavery, misogyny, and homophobia.

One queer character, Surgeon General Theo Smith, describes life on the ship as one of stark degradation:

A queer. Not a man or how a man’s supposed to be. Bent. On Q deck, all children are referred to as girls. All people–all Q-deckers at least—are assumed women unless there’s a statement or obvious sign otherwise, such as the fashions they wear or the trade they choose. The more bold among the Guard call me faggot when they are drunk or whispering. Because I refuse to keep my beard.

Smith exist as a colleague, teacher, and in some ways a mental soul-mate for Aster. His life an echo of the antebellum South’s one drop rule: he is a mix of elements that don’t equate to manhood on the USS Matilda, half black/queer/thin/pale:

My sissyness and my sickliness were two sides of the same coin to my father. I was weak and didn’t belong. The feared scandal of my birth—bastard child of a black woman—had already forced his resignation as sovereign. The least I could do was be a good strapping lad.

Amidst a shared love for precise medical procedures, molecules, and atoms, both Theo and Aster are also haunted by their familial legacies. Theo is troubled by thoughts of his father expectations:

My father raised blue field spaniels, hardy, spry hunting dogs. I learned from him that sadness is the hardest thing to breed out of a bloodline. A hound with no prey drive was no hound at all and should be killed. I saw him drown a whole litter once, and I think he meant to drown me too. Conform or die. That was his motto. I am oddly doing bits of both each half-assedly.

Meanwhile, Aster grapples with uncertainty of knowing if her mother wanted her at all:

If Aster told her story it’d go like this: Once upon a time, a mama had a baby, a dark-brown squirming thing, unwieldly and small. The mama named the baby Aster for the genus of florae, and for the ancient word meaning star, and for the way you had to reach to the back of your throat to form that soft A sound. Not a name you gave a baby you planned to leave in a closet to die.

The novel is broken into the four sections. Part 1-Thermodynamics, relationships of all energy; Part 2-Metallurgy, science concerned with properties of metals and their production and purification; Part 3-Phylogeny (phylogensis)-the evolutionary development and diversification of a species or group of organisms, or of a feature of an organism; and finally, Part 4-Astromatics, divination by means of the stars. Each section is a cowrie shell reading based in community, science, spirits, fables, and a kaleidoscope of experiences specific to bodies who are not free.

The novel’s primary concern is freedom: freedom from patriarchy, freedom from not belonging anyplace in particular, and freedom from the heavy gun barrel load of class. The book is published by Akashic, whose tagline “Reverse Gentrification of the Literary World” might be just my favorite from any publisher. It’s no secret that the Brooklyn-based independent company was built to protect writers who live in the margins, whose works points to non-conformity and an insubordination of the corporate-literary mouse traps.

This book is for anyone searching for self-actualization in a fractured culture, for societal and familial orphans, for anyone whose people were kept against their will, for physicists, daughters (cis-gendered or not), freedom fighters, and anyone who ever believed in the stars.