‘The Off Season’ by Amy Hoffman

‘The Off Season’ by Amy Hoffman 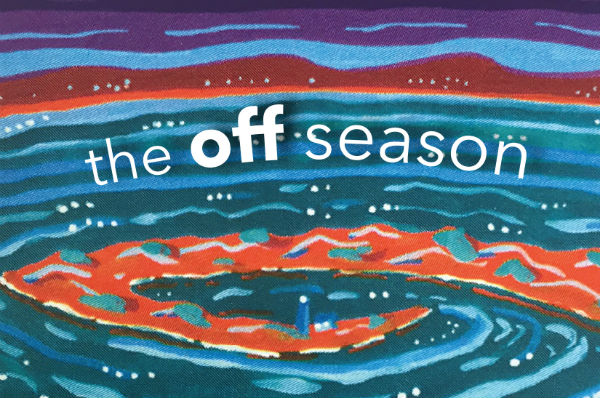 Given our exposure to daily political outrages, this might be the perfect time for Amy Hoffman’s frolicking portrait of Provincetown’s off-season community. The novel opens with Nora cheating on Janelle, her recently cancer-free lover, with a sexy, charismatic local named Baby Harris. When the affair is discovered, Janelle tosses Nora out on the street. It’s a dour way to begin a light-hearted novel and at first, there’s a dissonance between the plot and the comic voice. But as Nora blunders her way forward, the story and the writing style smooth into a fast-paced, buoyant, often celebratory tale of rediscovering creative power, sexual cavorting, and how a diverse, long-term community enfolds a newcomer who is emotionally and financially at a loss.

Nora finds shelter with Miss Ruby, a cigarette smoking, cat hoarding, old woman she’s found wheezing by the side of the road. Her cafe owner friend Bob gives her a job in a local coffee shop. She works with Brunhilda, the Valkyrie of baristas, whom she pegs as competition for the sexually confident, non-monogamous Baby Harris Still, she throws herself and her anxieties into a shaky, jealousy-ridden relationship with her partner-in-cheating. She also becomes an eco-activist protesting the polluting of the nearby ocean waters—not out of any personal conviction but in an attempt to make up with her ex. Clearly, Nora is desperately and often hilariously adrift in her emotions.

But Nora does have one solid, strengthening through line that holds her more and more steady. She begins to paint again. Miss Ruby assures her that it’s just fine to take over a tool shed on an adjoining property, so she creates a studio. She begins with portraits of the people around her—Miss Ruby; Baby; Reverend Patsy; Margo/Marcus, the community’s beloved, aging drag queen; Tony, an old butch; Roger, Nora’s gay guy friend she lost in the break-up; and finally, Nora’s ex. As she becomes more certain of her artistic vision, the portraits are woven into a mural painted on long sheets of paper where Nora portrays Provincetown with its shops and shoreline and sunrises and whales.

All the novel’s antics, themes, and relationships come together at Nora’s art show; she opens the doors of the tool shed/studio to her newfound community and everyone arrives to drink cheap wine and see themselves and their town. In this moment, the novel comically convalesces into an uproarious reflection on the power of community, friendship, and lovers, both past and present.